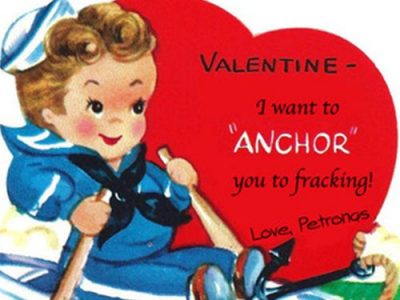 That’s the tone of a series of valentines released late last week by Dogwood BC, this one addressed from fossil producer Encana (now Ovintiv) to Premier John Horgan, just days after a four-page analysis by the Wilderness Committee listed the subsidies going to the province’s top 10 fracking companies.

“International fracking companies are feeling the love from B.C.—to the tune of a billion dollars a year in sweetheart deals,” Dogwood writes in a Facebook post. “Valentines like these must be flooding in to John Horgan’s office this week!”

The two other Valentine’s Day messages in the series: “Will you be my credit line?” colossal fossil Royal Dutch Shell, a lead partner in the C$40-billion LNG Canada megaproject, asks B.C. taxpayers. And “Valentine: I want to anchor you to fracking,” from Malaysian state fossil Petronas, another LNG Canada investor, illustrated with a young child in a rowboat wearing a sailor suit.

In the Wilderness Committee release, Ovintiv showed up as the biggest fracked gas producer, The Narwhal reports, while Shell Canada and Petronas Canada placed fifth and sixth.

“These companies are the ones that are causing us to fail to meet our climate targets in B.C.,” said report author and Wilderness Committee climate campaigner Peter McCartney. “They are specific companies, and I think it’s good for the public to know who is doing this and whose fault it is when the provincial government comes out and says we’re 28 to 44% away from meeting our climate targets.”

Citing the report, The Narwhal says the provincial payouts often exceed what the companies pay back in taxes and royalties. “Ovintiv paid C$3.7 million in provincial taxes last year and $72 million in royalties over a three-year period ending in 2018,” writes reporter Sarah Cox. “McCartney found that Ovintiv received more than twice that total amount—$167 million—from the B.C. government in deep well royalty credits over two fiscal years starting in 2016.”

ARC Resources—the second-largest gas producer on the list, with 250 active wells and 227,000 hectares under its control—was the only one in the top 10 to pay out more to the province than it received in subsidies, The Narwhal notes. Between 2016 and 2018, the company received $74 million in drilling credits and remitted $157 million in provincial royalties.

“Deep well drilling credits were introduced when fracking—a technique that involves blasting a mixture of water, chemicals, and sand into a well to break apart rock formations and release previously inaccessible gas deposits—was a relatively new, expensive technology,” The Narwhal explains. “But the credits remained in place after fracking became cheaper and widespread.” Now, the report says a company can score a rebate of $440,000 to $2.l8 million depending on the depth of the well, and the lists six other types of provincial subsidies—including carbon tax exemptions—that “whittle away any benefits to the public purse” from B.C.’s multi-partisan bid for a sustained fracking boom.

“There are all of these insidious ways that these companies don’t have to pay,” McCartney told The Narwhal. “The provincial government is rolling out the red carpet for fracking and LNG companies—some of the biggest polluters in the province—and they’re not being treated in the same way as every other industry in the province.”

That leads McCartney to conclude that “fracking companies are only able to operate with enormous public giveaways from the NDP government.”

The B.C. Ministry of Energy, Mines and Low Carbon Innovation told The Narwhal it is reviewing oil and gas royalty credits “to ensure they meet B.C.’s goals for economic development, a fair return on our resources, and environmental protection,” Cox writes.

But meanwhile, the International Institute for Sustainable Development places B.C.’s subsidies to its fracking-dependent liquefied natural gas (LNG) industry at $830 million in 2017-18. The Narwhal recalls a September, 2020 report by Stand.earth that tracked $1 billion in provincial fossil fuel subsidies over a two-year span.

“The government of British Columbia, elected to fight climate change, continues to prop up the fossil fuel industry, using tax dollars to fill the coffers of fracking companies,” Julia Levin, climate and energy program manager at Toronto-bases Environmental Defence, told Cox. “Subsidies are often justified by politicians on the basis that royalties will generate more public revenue. But B.C. pays out substantially more in fossil fuel subsidies than the province earns in oil and gas royalties—and that gap is growing year over year.”