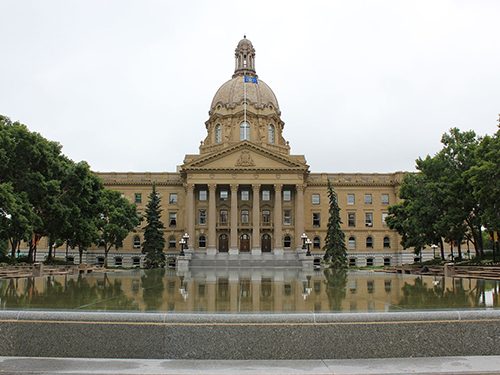 The Edmonton-based Parkland Institute is out with a detailed fact check of Premier Jason Kenney’s recent pronouncements on the cancellation of the Keystone XL pipeline, while Maclean’s magazine speculates on whether this is the job Kenney was looking for when he sought the Alberta premiership.

Ever since U.S. President Joe Biden kept his promise and rescinded Keystone’s presidential permit on his first day in office last month, “Kenney and others continue to spread misinformation about KXL, the oil sands industry, and the energy transition,” Parkland Research Manager Ian Hussey writes on the organization’s blog. “Unfortunately, some media commentators are repeating Kenney’s talking points without fact checking.”

But contrary to those talking points, Hussey says Alberta fossil producers don’t need KXL (or the Trans Mountain expansion), the pipeline would not have reduced tar sands/oil sands producers’ operating costs, and the construction project would have created far fewer jobs than Kenney and other KXL proponents have been claiming.

“Alberta has so much to offer Canada and the world,” Hussey writes. “We need our elected officials to begin to take seriously the need to support these economic diversification possibilities and others that may arise through the ingenuity of Albertans.”

Hussey takes a close look at a half-dozen claims Kenney has been making on behalf of the now-defunct pipeline project, beginning with the “devastating consequences” he insists tar sands/oil sands producers will face in its absence. Citing analyst David Hughes, Hussey says the industry has enough “takeaway capacity” with existing pipelines, plus other expansions and “optimizations” that have already been announced, a reality that undercuts demand for Trans Mountain as well as KXL.

Former Husky Energy CEO Art Price said as much in a comment on Biden’s Keystone decision. “Pipelines today make no sense,” he stated. “There’s a surplus in the market. Stop trying to focus Alberta’s economy on growing oil production. Drop it. The industry has.”

While Kenney has been calling the cancellation “a gut punch for the Canadian and Alberta economies,” Hussey says the pipeline wouldn’t have reduced transportation costs for Alberta bitumen producers, and its cancellation won’t open the door to “retroactive” cancellations for other pipelines between the U.S. and Canada, as the premier has claimed.

“Line 3 and Line 5 have been facing legal and regulatory issues for years,” he writes. “Right now, the main sticking point for both pipelines pertains to water issues—permits, easements, and concerns about drinking water.” That’s why Michigan Governor Gretchen Whitmer has been casting a critical eye on operation of the 68-year-old Line 5. And in that political context, “it certainly isn’t helpful to Alberta or Canada that Premier Kenney suggested in November that Governor Whitmer is ‘brain dead’” for trying to shut the line down. Particularly not when Whitmer “was the national co-chair of Joe Biden’s presidential campaign.”

Hussey takes aim at Kenney’s “tall tale” that the U.S. will replace Canadian tar sands/oil sands imports with product from Venezuela or the Middle East, points to the many other economic diversification options Alberta could take advantage of, and puts the pipeline’s direct employment in Alberta at 1,400 during construction—a far cry from the 59,000 the Alberta premier has been claiming. Read the blog post to get all the numbers and details.

While Parkland takes aim at Kenney’s facts and arguments, Maclean’s writer Jason Markusoff says the premier doesn’t appear to be having a very good time in his latest gig. “He returned from Ottawa with a suitcase full of ideas about who Albertans are and what they want from their premier,” the magazine writes. But now, a “seemingly perfect political match” looks to be going wrong.

Markusoff chronicles Kenney’s five-year “quest to restore the province” by merging two right-leaning political parties, defeating Rachel Notley’s New Democratic Party government, and holding fast to Alberta conservatives’ consistent promises to balance budgets and “use government muscle to boost the [fossil] energy sector’s reputation and might. He bombed around the province in a blue pickup truck and told supporters at rallies: ‘We get ‘er done.’” And “the formula appeared to work, at least electorally.”

But governing has turned out to be a lot tougher than spinning an election win.

“Nearly two years into Kenney’s stint as Alberta premier, nothing is what it seemed,” Markusoff writes. “The disorientation runs deeper than the common, pandemic-induced challenges and public malaise that have undone the political agendas of leaders around the world; deeper even than the profound hardship and unemployment inflicted by the downturn of the [fossil] energy economy. Albertans are coming to realize they’re in the midst of a deeper, structural change, not another bust to be succeeded by another boom. Kenney has taken halting steps toward that new era. But he’s largely stuck with his pre-pandemic agenda—drawing outcry from Albertans angry about cuts to the public sector or government spending on private interests.”

After running on a platform that contained 375 specific policy commitments, “this is not the Alberta that Jason Kenney came back for,” Markusoff says. “It’s different in outlook, and in its reception to the Great Right Hope he presented himself as. He has time in his mandate to figure out what Albertans want, but a track record with so many missteps leaves him with so much more to fix.”

Markusoff goes deep on the mix of challenges Kenney must contend with in the two years before he has to face the voters—more than half of whom now believe their province’s best days are behind it. The premier has “the benefit of time before Alberta’s 2023 election—time to figure out how to balance his rural base’s demands with those of urban moderates, and bring the economic revival he’d promised, and manage a structural fiscal crisis without alienating everyone who relies on public services and salaries, and figure out a way forward for the energy economy, either through transition or steely resilience,” he writes.

But it’s going to be a tough slog. “When he set off on his complicated quest to swoop in and unite two warring conservative parties and lead this united group to victory, political watchers’ refrain was: if anybody can do it, Jason Kenney can. With problems all around him, who’s saying that now?”