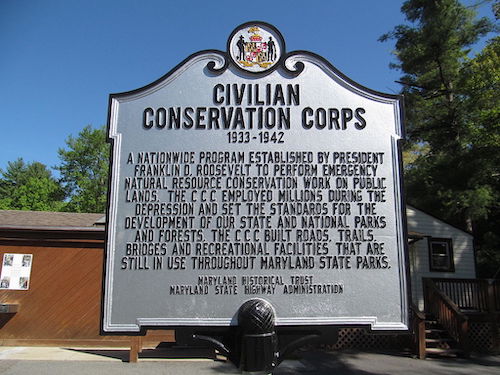 A recent executive order by President Biden has set policy-makers on course to design a strategy for a new U.S. Civilian Climate Corps, with details due by late April. Comparisons to the New Deal’s Civilian Conservation Corps and to the present-day AmeriCorps are inevitable, but also problematic, observers warn.

The Civilian Climate Corps (CCC) initiative promises to put young people to work “restoring the public lands and waters” of America through projects like planting trees and refurbishing the parks system, writes Grist. That basic framework has much in common with Franklin D. Roosevelt’s extremely popular Conservation Corps from nearly a century ago.

And the stipulation that the jobs be desirable, well-paying, and an entryway to a green career—together with the program’s explicit coupling of green job creation and fighting the climate emergency—have many invoking an obvious link to the Green New Deal put forward by the progressive wing of the Democratic party.

Citing a story in Mother Jones, Grist writes that Rep. Alexandria Ocasio-Cortez (D-NY), a chief proponent of the Green New Deal, was, in fact, instrumental in persuading climate envoy John Kerry to run with the idea a climate corps.

“Not that you’ll hear Biden saying much about a Green New Deal, since commentators on Fox News have turned the slogan into a synonym for ‘socialist plot that’ll take away your hamburgers’,” adds Grist.

Now, in a U.S. economy gutted by the pandemic (18 million Americans are now receiving unemployment benefits), the idea of reviving the CCC is receiving strong bipartisan support, said Danielle Deiseroth, a climate analyst at Data for Progress.

“The Green New Deal is all about a jobs and justice approach to climate policies, so I think the new climate corps proposal really encapsulates that,” she told Grist.

In May, a Data for Progress poll found that “nearly 70% of the public supports the idea of a new, climate-focused corps,” Grist notes. “Even a majority of Republican voters, 62%, liked the idea.”

But Biden’s CCC will not—must not—take on one particularly unjust aspect of FDR’s brainchild, notes Grist: that is, its focus on helping one narrow segment of society.

“One big one issue with the CCC, and other New Deal programs, was discrimination,” explains Grist. “About a tenth of CCC volunteers were Black, and while camps outside the South were originally integrated, officials ended up caving to racist pressure and segregating them into separate work sites. On top of that, only men could join.”

Any new version of the corps would have to be designed to benefit all people, said Neil Maher, a historian with the New Jersey Institute of Technology.

That Biden’s CCC will also have a much-expanded mandate—beyond the conservation of public lands—is clear in the language of the executive order, Grist adds.

But another potential blueprint for the corps holds more danger than promise, and many commentators are warning against modelling any new version of the CCC after AmeriCorps—“a program that sends people all over the country to help with disaster recovery, build affordable housing, conserve the National Parks, and more.”

Citing a recent report in Gizmodo, Grist writes that the AmeriCorps program is notorious for low pay and for a granting system that as much as guarantees “sporadic investment”.