Lookback: Ocasio-Cortez’ 2019 Video Delivers ‘a Message from the Future’ 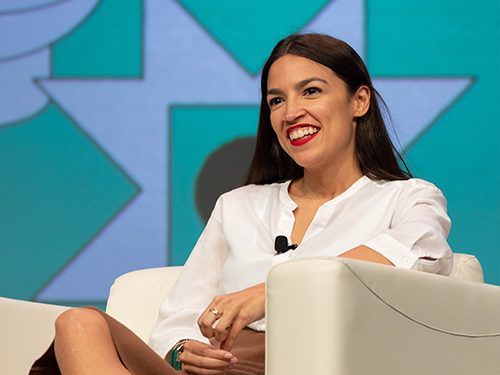 In a video first published in 2019, shortly after she first entered the U.S. House of Representatives, Rep. Alexandria Ocasio-Cortez (D-NY) situates herself in the future and looks back to what it took to win legislative support for a Green New Deal that became the basis for rebuilding her country and driving a just, green transition.

“We can be whatever we have the courage to see,” Ocasio-Cortez says, recalling the thrill for neighbourhood children when Americans elected the most diverse Congress ever—up to that point, she said—in mid-term elections in 2018. In the course of the 7½-minute story, Message from the Future, one of those children takes a wetland restoration job in Louisiana, then goes to work in solar engineering and child care before running for office and succeeding Ocasio-Cortez at the end of her own House career in 2028.

Co-written by Ocasio-Cortez and Canadian film director Avi Lewis, and illustrated in mixed media by award-winning artist Molly Crabapple, the film traces an America that courageously chooses to create a  sustainable, just, generous country, with the resilience to confront and reverse a legacy of injustice while responding to increasingly severe climate impacts.

Imagine, the film asks, if America embraced “swing for the fence ambitions,” like Medicare for All. Imagine if it threw itself into restoring its ravaged ecosystems, with recovery programs that incorporated Indigenous knowledge and practices, and even wrote into law that all national elections henceforth would be publicly funded.

Ocasio-Cortez describes how, in the reality she crafts, her country became “not only modern and wealthy, but dignified and humane, too.” Her fellow Americans “stopped being so scared of the future, and each other, and found their shared purpose.”

Presenting the film in an essay for The Intercept, author and activist Naomi Klein explains that the idea sprang froma conversation with Crabapple about involving artists in promoting the vision of the Green New Deal. “Most art forms are pretty low-carbon, after all, and cultural production played an absolutely central role during Franklin D. Roosevelt’s New Deal in the 1930s,” Klein writes.

Today, she notes, 21st-century artists could help society overcome the widespread skepticism “that humanity could ever pull off something at this speed and scale”—a skepticism fed, in part, by a seemingly steady diet of fictional narratives that take “some kind of ecological and social apocalypse for granted…almost as if we have collectively stopped believing that the future is going to happen, let alone that it could be better.”

Meanwhile, news reporting generally reinforces that sense of futility by painting the Green New Deal “as either impossibly impractical or a recipe for tyranny.”

Enter the “incalculable power of art,” a power proven over and over, writes Klein, by the tens of thousands of painters, poets, photographers, musicians, and craftspeople who, explicitly or not, threw the weight of their creative gifts behind FDR’s New Deal—and were paid in kind.

Critically, “the New Dealers saw artists as workers like any other: people who, in the depths of the Depression, deserved direct government assistance to practice their trade.” The government delivered, through programs like the Federal Art, Music, and Theatre Projects.

The result? “A renaissance of creativity and a staggering body of work that transformed the visual landscape of the country,” Klein writes.

While “much of the art produced by New Deal programs was simply about bringing joy and beauty to Depression-ravaged people, and challenging the prevalent idea that art belonged to the elites,” she adds, some was overtly political. Many artists set out “to mirror a shattered country back to itself and, in the process, make an unassailable case for why New Deal relief programs were so desperately needed.”

Klein lists just a few of the masterpieces that continue to resonate in America and around the world, thanks to the New Deal, “from Dorothea Lange’s photography of Dust Bowl families enveloped in clouds of filth and forced to migrate to Walker Evans’s harrowing images of tenant farmers that filled the pages of ‘Let Us Now Praise Famous Men’ to Gordon Parks’s pathbreaking photography of daily life in Harlem.”

Much like, notes Klein, the visual picture painted by Ocasio-Cortez and Crabapple in the poignantly buoyant Message from the Future.

Study Shows U.S. Decarbonizing by 2050 for $1 Per Person Per Day