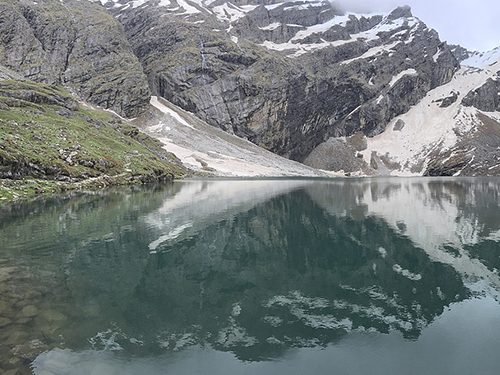 Experts and residents in India have long been sending a message to the Modi government in India: Do not build hydroelectric dams in the Alaknanda-Bhagirathi basin. But those warnings were ignored, and now the collapse of the Nanda Devi glacier has left a toll of at least 26 dead and nearly 200 missing, as the fear of further collapse grips the living.

Long before the Himalayan glacier “calved”—a partial collapse that scientists believe was triggered by a rockslide that was itself a consequence of glacial ice melt—“the warning signs were clear,” reports the New York Times. The ice collapse set off a torrential flash flood down the Rishiganga River, sweeping away hundreds, obliterating one dam, and damaging another.

“The Himalayas have been warming at an alarming rate for years, melting ice long trapped in glaciers, soil, and rocks, elevating the risk of devastating floods and landslides,” the Times explains. And the last thing this already fragile ecosystem could support was a hydro dam.

As long ago as 2012, government-appointed groups were advising against dam-building in the Alaknanda-Bhagirathi basin. Ravi Chopra, director of the People’s Science Institute in Uttarakhand—the northern Indian province where the flood took place—told the Times he was part of a committee that in 2014 advised the government specifically not to develop any dams above 7,000 feet—known as the “para-glacial zone.”

Yet both of the hydro projects lost to the recent glacier collapse were built in that zone, a fact that comes as no surprise to D.P. Dobhal, a former scientist at the government-run Wadia Institute of Himalayan Geology. “When we develop such projects in the Himalayas such as hydro projects or roads and rail, in detailed project reports the glacier study data is never taken into consideration or included,” he said.

The government also failed to communicate any sense of the risks involved to local communities.

“There was no program or training in the village about disaster management by the government,” said Bhawan Singh Rana, head of one of the villages worst hit by the sudden, smashing torrent of ice and rock. “Our village is on a rock, and we fear that it may slide anytime.”

As for the official response to the disaster, the Times says Uttarakhand Chief Minister Trivendra Singh Rawat took to Twitter to warn against using the event as “a reason to build anti-development narrative.”

Seemingly obtuse to the cruel sting of his chosen metaphor, Rawat added: “I reiterate our government’s commitment to develop hills of Uttarakhand in a sustainable manner, and we will leave no stone unturned in ensuring the achievement of this goal.”