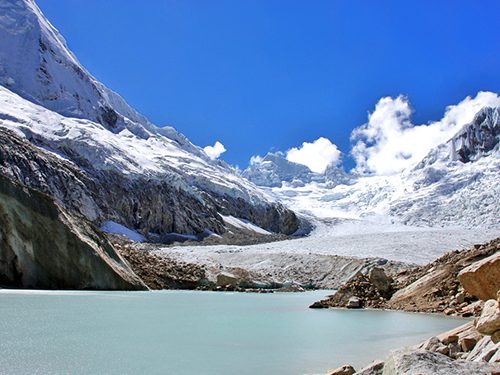 A landmark study of a Peruvian glacier has concluded that climate change caused by human activity is the key factor in the dangerous phenomenon of outburst flooding from glacial lakes. That finding could prove useful in a David vs. Goliath climate lawsuit currently being heard in a German civil court.

“As the Palcaraju Glacier in the Andes has melted, Lake Palcacocha has expanded rapidly—approximately 34-fold by volume since 1990,” write the study authors in a guest post for Carbon Brief. “Labelled by the media as a ‘deadly flood time bomb’, the risk to downstream communities persists despite the efforts of local authorities to drain and dam the lake.”

That potentially devastating time bomb is a direct result of human-caused global heating, conclude the research duo, made up of lead author Rupert Stuart-Smith, a doctoral researcher at the Environmental Change Institute at Oxford, and Gerard Roe, associate chair of the University of Washington’s Department of Earth and Space Sciences. At risk is the downstream Peruvian city of Huaraz, with 120,000 residents.

In its coverage of the study, recently published in the journal Nature Geoscience, Inside Climate News writes that Lake Palcacocha “sits at 14,980 feet above sea level in the gleaming Cordillera Blanca mountain range,” with the Palcaraju Glacier towering a vertical mile above that. The now tremendously exposed city of Huaraz lies “5,000 vertical feet below the lake, near the mouth of a steep, 13-mile canyon.”

As Stuart-Smith explains in a separate guest post for The Guardian, he and Roe were able to establish that “95% of the observed temperature change around the glacier is the result of human-caused climate change,” and that 100% of the glacier’s retreat owes to global heating.

“In other words,” Stuart-Smith writes, “in the absence of climate change, it is as likely that the glacier would have lengthened as it is that it would have retreated.”

Today, the overburdened Lake Palcacocha ranks in the “highest hazard level” for outburst flooding risk. That puts Peru in the unfortunate league of countries like Nepal and Bhutan—they’re all particularly vulnerable, with many living “in the path of potential flood waters.”

The findings come as a boon to climate litigators, who say the research “could be key to holding major polluters accountable for their contribution to climate change,” writes The Guardian.

“Given that the court in Germany has already approved that, legally, there is responsibility for major emitters, this would have a bearing everywhere,” said Hamburg-based environmental lawyer Roda Verheyen. She told The Guardian she anticipates the study will “provide evidence of cause and effect that can be used in court worldwide.”

Verheyen herself is representing Saúl Luciano Lliuya, a Peruvian farmer who lives with his family downstream from Lake Palcacocha, in a climate suit against RWE, Germany’s largest electricity provider.

Lliuya is asking RWE to pay its share of responsibility for the damage prevention costs now being incurred by the citizens of Huaraz—so far totalling about US$20,000. While a small sum, any ruling in Lliuya’s favour “would set a significant precedent for future claims against major emitters,” notes The Guardian.

“The judges are currently examining the evidence,” the UK media outlet adds.