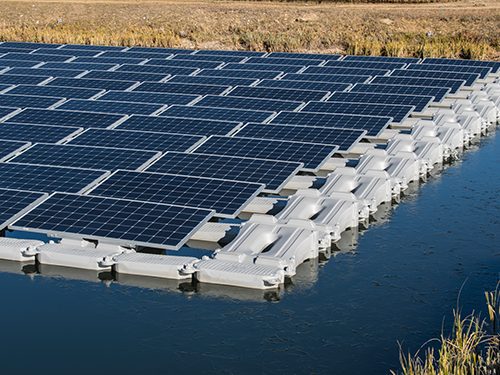 Covering just 1% of Africa’s hydroelectric reservoirs with floating solar panels could double the continent’s hydro capacity while increasing dams’ output by 50%, delivering a huge boost to a region struggling with the dual impacts of the climate emergency and widespread energy poverty, a new study concludes.

“Hydropower accounts for 17% of the electricity generated across Africa and more than 90% in some nations, including Ethiopia, Mozambique, and Zambia,” writes Carbon Brief. And with “50 new dams currently under construction,” many nations in Africa are hurrying to redress a massive gap in energy equity.

“As it stands, less than half the population of sub-Saharan Africa has access to electricity,” Carbon Brief says.

The climate emergency is throwing a wrench into these plans, however, with global heating disrupting rainfall patterns, deepening droughts, and depleting the reservoirs upon which hydropower depends.

“Floating photovoltaics could be a potential alternative to expanding hydropower in certain areas, especially in water-scarce regions where droughts are causing severe repercussions on hydroelectric generation,” said a representative from the European Commission’s Joint Research Centre, which conducted the study.

To conduct the research, the team “used a combination of satellite images and data from hydropower reservoirs and solar radiation to estimate floating solar’s potential at the 146 largest hydropower facilities in Africa as of 2016,” Carbon Brief says.

Under a theoretical (if unfeasible) maximum scenario, “where 100% of each reservoir was covered with solar panels,” the researchers discovered “an accompanying 100-fold increase in capacity, with 2,922 GW of solar added to the existing 28 GW of hydropower.”

That kind of capacity increase “would mean a 50-fold increase in electricity production compared to current hydro output, from 106 to 5,293 terawatt-hours,” writes Carbon Brief. That would be far in excess of the continent’s current electricity demand of about 700 TWh.

Scaling the study back to what’s actually possible, the researchers found that covering just 1% of existing reservoirs with solar panels would still provide a tremendous power boost, with installed capacity more than doubling, to 58 GW. Such an initiative would also increase the “overall electricity output of the hydropower and solar hybrid system to 159 TWh, a 50% increase from hydropower alone.”

“For a continent that will need to cherish every last drop as global heating continues to rise, this is significant,” said Mohamed Adow, director of Power Shift Africa.

Adow added that the relatively high cost of solar means realizing the technology at any scale will require support—both technical and financial—from the world’s richer nations.

“This is why developing nations talk about the importance of ‘technology transfer’ at the UN climate summits,” he told Carbon Brief. “It must be top of the agenda when countries meet this year at COP 26 in Glasgow.”