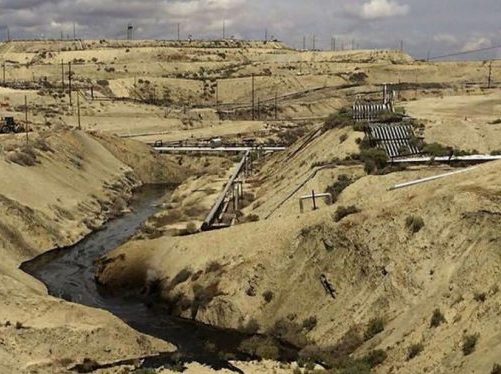 ﻿A European campaign organization responded with “tears of joy”, and a reporter predicted a wave of new litigation after an appeals court in The Hague ruled late last month that colossal fossil Royal Dutch Shell must pay compensation to four Nigerian farmers affected by large pipeline spills between 2004 and 2007.

The court “held Shell’s Nigerian subsidiary liable for two leaks that spewed oil over an area of a total of about 60 football pitches in two villages, saying that it could not be established ‘beyond a reasonable doubt’ that saboteurs were to blame,” Al Jazeera reports. “The Hague appeals court ruled that sabotage was to blame for an oil leak in another village,” but still held that case open to determine the extent of the pollution and whether it still needs to be cleaned up.

“Under Nigerian law, which was applied in the Dutch civil case, the company is not liable if the leaks were the result of sabotage,” Al Jazeera explains. “The court did not hold Shell’s parent company, which is based in the Netherlands, directly responsible,” but said the parent company and its subsidiary “must fit a leak detection system to a pipeline that caused one of the spills”.

In the Nigerian capital, Abuja, Al Jazeera reporter Ahmed Idris said the ruling could lead to a series of similar cases. “Hundreds of people have queued up to sue Shell for contaminating the Niger Delta,” he said. “I spoke to an activist a short while ago who said, ‘This is just the beginning’, and a lot of analysts also believe [the ruling] will open the floodgates to so many litigations against oil production companies that have been operating in Nigeria.”

“Tears of joy here,” tweeted Friends of the Earth Netherlands, which joined the four farmers in launching the case in 2008. “After 13 years, we’ve won.”

Shell insisted the spills were caused by sabotage and declared itself “disappointed that this court has made a different finding on the cause of these spills and in its finding that [the subsidiary, Shell Petroleum Development Company of Nigeria] is liable.”

However, Shell “has faced heavy criticism from activists and local communities over spills and for the company’s close ties to government security forces” since it began exploiting Nigeria’s oil reserves in the late 1950s, Al Jazeera says. That concern extends to what Amnesty International calls the “arbitrary executions” of writer and human rights campaigner Ken Saro-Wiwa and eight other Ogoni activists in 1995.

Friends of the Earth “argues that leaking pipes are caused by poor maintenance and inadequate security and that Shell does not do enough to clean up spills,” Al Jazeera says.

In a separate case in The Hague, Milieudefensie is arguing that Shell violates human rights “by extracting fossil fuels and undermining the Paris Agreement’s aim of keeping temperature rises below 1.5°C,” Bloomberg reported late last year. The case is citing the successful Urgenda lawsuit against the Netherlands government as a precedent.

“We agree with Milieudefensie that action is needed now on climate change,” a Shell spokesperson said. “What will accelerate the energy transition is effective policy, investment in technology, and changing customer behaviour, none of which will be achieved with this court action.”

But “Milieudefensie argued that Shell has a ‘special position of power’ in the energy transition, making it just as responsible for climate change as most states,” Bloomberg recounted at the time, single-handedly accounting for 1.2% of global carbon emissions.

“Milieudefensie hopes a ruling in its favour could have a ripple effect for other fossil fuel producers,” the news agency added.

A week later, Bloomberg said a Nigerian state government had seized a Shell oil site in the Niger Delta in a dispute over a past oil spill that dates back decades.

Last week, the colossal fossil reported a US$21.7-billion loss for 2020, adding that it might have to cut production in response to “significant uncertainty” in global oil and gas demand.