Wyoming Citizens Divided on Economic Shift from Fossil to Renewables 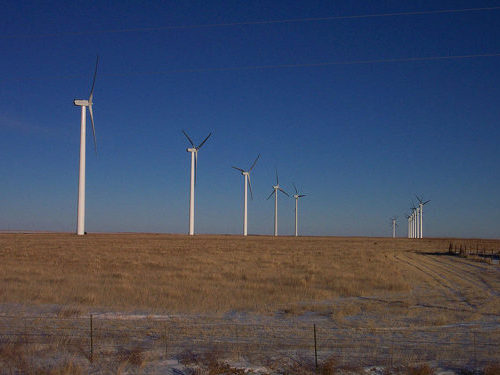 As the low-carbon transition takes hold, fossil-producing Wyoming is at a crossroads. The windy state is grasping at the potential to invest big in renewable power—but old habits die hard, and uncertainty about wind’s ability to deliver has many citizens fearing change.

Wind farm construction is booming around Cheyenne, and the resulting tax revenues have kept municipal coffers in the black while other regions run red from fossil losses and pandemic debt, reports High Country News, in a story featured in climate journalist Emily Atkin’s daily Heated newsletter.

Rather than suffering the 25% loss in tax revenue expected once the pandemic hit, Cheyenne saw a 20.5% year-over-year increase between July and September 2020, courtesy of the Roundhouse Wind Project.

“In September alone, the increase was a staggering 83%, or US$1.4 million,” High Country News writes.

Now citizens are asking whether the boom will continue, and what kind of long-term jobs wind can support. City Treasurer Robin Lockman “thinks the boom her city saw in the third quarter of 2020 might be a one-time influx from a period of heavy construction,” explains High Country. “Residents have also raised concerns that wind energy jobs aren’t going to locals.” Local legislators have proposed removing tax incentives on wind, and county groups have opposed projects, “saying turbines disrupt dark sky areas, impede views, or decrease property values.”

But Connie Wilbert, director of the U.S. Sierra Club’s Wyoming chapter, said property, energy, and equipment sales taxes flowing to the region will be no small payoff, even after the initial construction boom subsides. “For these small towns in Wyoming, budgets aren’t that big, so if you had a steady, reliable $5 million a year, that’s a big deal,” she told High Country.

In its own reporting on the rise of wind energy in Wyoming, German broadcaster Deutsche Welle warns that those hoping to deliver on President Joe Biden’s climate (and labour) promises must first contend with a groundswell of resistance from die-hard coal supporters in the state, and from communities that still depend on fossil resources.

Despite coal employment dropping from 7,000 in 2010 to 4,500 today and coal-powered  electricity generation plummeting to a 42-year low, “some 12 tonnes of coal are extracted from Wyoming’s soil every second,” writes DW.

But wind does have its supporters in Wyoming.

“This change has benefitted our family greatly,” said Rick Grant, a fourth-generation livestock farmer with 15 wind turbines on his property, adding that revenue from the turbines will allow future generations of his family to keep the cattle ranch going.

But many in Wyoming still see wind farms and their like as a snare and a delusion, reports National Public Radio (NPR).

“We’re looking at schools with no kids in them, teachers that don’t have jobs because you can’t hire teachers if you don’t have kids to teach,” said Joel Bousman, a commissioner in Wyoming’s Sublette County. He told NPR that Biden’s agenda—including a recently-announced halt to oil and gas leases, under which 90% of the state’s gas is extracted, ignores communities like his.

“We’re worried about total devastation of our economy in this county if this is truly an indication of the direction he wants to go,” he said.

Environmentalists in the county disagree, noting that oil and gas prospects turned bearish long before Biden won the election. “There were 21 drilling rigs statewide in Wyoming a year ago,” NPR notes. “Now there are only six.”

But while fossil companies test the winds and lower the sails, their often-devoted employees keep their heads down and eyes shut. In an interview with Fox News, former Keystone XL foreman Neal Crabtree expressed disappointment that Biden kept his campaign promise to cancel the project. Asked if he will accept offers to retrain for solar panel construction, he said no.

“I’m a pipeliner. My grandfather did it. My daddy did it,” he said. “This country was built on fossil fuels. We’re the superpower we are today because of fossil fuels.”