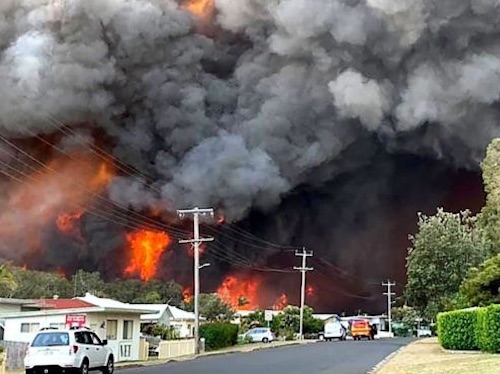 A bushfire outside Perth, Australia has destroyed 71 homes, injured six firefighters, and forced some residents to evacuate—even though the city had just entered a snap, five-day pandemic lockdown.

Premier Mark McGowan urged the majority of the state capital’s two million residents to shelter in place, but warned the state was facing an “extremely concerning and serious” situation, the British Broadcasting Corporation writes.

“Whether you are in lockdown or have been personally directed to quarantine for COVID-19, you must do whatever you need to do to keep yourself and your loved ones safe,” the Department of Fire and Emergency Services said.

While the Perth area has not generally been known for large fires, “in the last few years we have seen increased fire behaviour with rapid escalation overnight,” said State Deputy Fire Commissioner Craig Waters. “The changing climate…and moisture deficit in the soil is impacting how the fire behaves.”

Which means that people quarantining in potential fire zones should “use common sense” and “do whatever they need to do to look after their own safety and the safety of their loved ones,” he added. “If they have to go to an evacuation centre, that is fine, too.”

The fire near the town of Wooroloo was first reported at mid-day Monday before growing into a “fast-moving, erratic blaze which overnight raced through the hills and valleys fringing the city’s northeast,” BBC writes. “Perth residents woke up on Tuesday to a blanket of smoke across the city. People reported ash falling from the sky in locations 50 kilometres (31 miles) away from the fire-front.”

The flames put people in three semi-rural suburbs in the northeastern part of town in “immediate danger”, with fire officials telling residents farther afield that “the best option is to leave early and to leave now”.

Perth has been experiencing “extended dry conditions”, BBC says, with temperatures of 35°C/95°F. “The weather forecast for Muchea predicts cooler temperatures for Thursday, 28°C in the afternoon and wind out of the east-southeast at 28 kilometres per hour with a relative humidity of 22%,” Wildfire Today writes. “Friday will be about the same.”