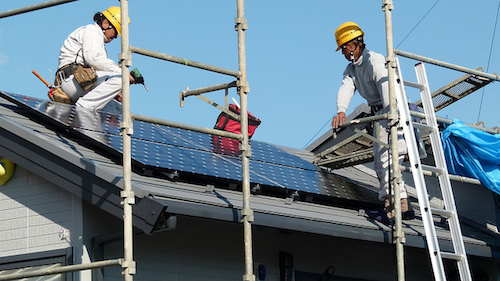 A detailed, local pitch for jobs and economic activity will be central to the Biden administration’s push to transform the way the United States produces energy and addresses the climate crisis, writes Washington Post columnist Jennifer Rubin, in a recent opinion piece on the pathway to “ending zero-sum green energy politics”.

After covering the wave of executive orders and announcements in which the administration laid out the initial dimensions of its climate plan last week, Rubin says the ability to “sidestep zero-sum thinking when it comes to climate change” will depend on how well the program builds public buy-in.

“If moving to sustainable, non-carbon-based energy means some people lose (eg., red-state Americans, oil and gas industry workers) and others win (eg., coastal liberals), the right will play the victim game and characterize their opposition to limiting carbon emissions as pro-job and pro-U.S. worker,” she writes. “If, however, Biden can convince Americans that there are only winners, opposition to his green energy plan should shrivel.”

“We’re going to power our economy with clean energy.” that will “produce millions of American jobs,” and “we’re not going to ask people to go from the middle of Ohio or Pennsylvania and ship out to the coast to have solar jobs,” McCarthy said. “You know, solar jobs will be everywhere, but we need to put people to work in their own communities. That’s where their home is. That’s where their vision is.”

“A key plank of our ‘Build Back Better’ recovery plan is building a modern, resilient climate infrastructure and clean energy future that will create millions of good-paying union jobs—not 7, 8, 10, 12 dollars an hour, but prevailing wage and benefits,” Biden added later that day.

But now, “workers, policy mavens, unions, and private sector leaders will need convincing,” Rubin says. “The administration is facing millions of workers who remain fearful about their own place in the new economy. Meeting that genuine concern will take considerable effort.”

While administration officials are signalling they understand the need to ground the transition at the local and state level, Rubin suggests three steps to ease the transition and boost its success:

• Reaching out to workers with concrete examples of what a well-paid future in the green economy will look like, at a time when the spectre “of leaving a good, union-paying job to be a $10-per-hour cashier at a big-box store looms large”;

• Recognizing that the U.S. fossil, auto, and other energy-intensive industries “are not immune to market forces or political realities” that are driving the shift off carbon. “The administration will need to highlight these and other developments to convince workers its promises are more than spin.”

While the rollout of the new administration’s climate and energy agenda is still in its early days, Biden and his team “should be both realistic and detailed about the economic transformation it envisions,” Rubin concludes. “That means bringing its pitch down to the state and local level and giving concrete data to reassure workers about their future job prospects. Only then, I suspect, will workers put aside the zero-sum view of green energy in favour of a win-win attitude.”

Wyoming Citizens Divided on Economic Shift from Fossil to Renewables