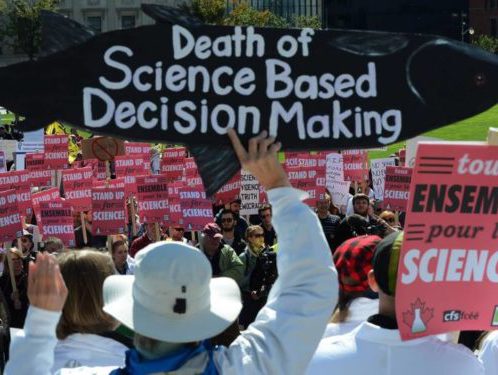 ﻿Trying to get through to your favourite climate denier? Stop telling them to “listen to the science” and start listening instead to where they’re coming from﻿, advises Grist reporter Kate Yoder.

Why? Because what Yoder calls the “quippy” catchphrase comes off as annoying and shuts down conversation, said Suzanne Shelton, CEO of Shelton Group, after polling Americans on their science opinions in May 2020.

That condescension, whether intended or not, plays particularly badly if the evidence being discussed—say, that fossil fuels are disrupting the climate—doesn’t “fit into people’s preconceived notions of how the world works,” notes Yoder.

“The simplification of the message is itself an anti-scientific move, because it denies the actual network complexity of knowledge and of society,” said Sheila Jasanoff, a professor of science and technology studies at the Harvard Kennedy School. Adam Rome, an environmental historian at the University at Buffalo, agreed, telling Yoder that rather than virtue-signalling a “belief in science” as if it were an unimpeachable monolith to be worshipped, climate advocates are better off expressing their own personal ideas and beliefs.

“The answer is to fight for the values and the visions you have,” he said.

Relying on catchphrases instead is especially dangerous because it “makes it seem like there’s no value judgments to be made,” added Darrick Evensen, an assistant professor of environmental politics at the University of Edinburgh. In reality, the science simply describes what might happen.

“It’s our values and the things that we care about that tell us what we should do,” he explained.

Compounding the problem is the myth of political disinterest in scientific research. That can lead to backlash if people suspect scientists have an agenda—such as “hoping to improve the world with their work,” noted Jasanoff.

Another pitfall: shutting down those who question the science behind an issue, whether that’s a mother concerned about vaccines or fossil-fuel communities fearful of their future in a low-carbon world.

What is needed is nuance, and respect for the people we address—rather than deepening today’s “corrosive” pro-science vs. “deplorable” dichotomy.

“If you’re actually trying to convince someone, put down the ‘pro-science’ megaphone and try to understand where they’re coming from. Then work to find common ground,” Yoder writes.