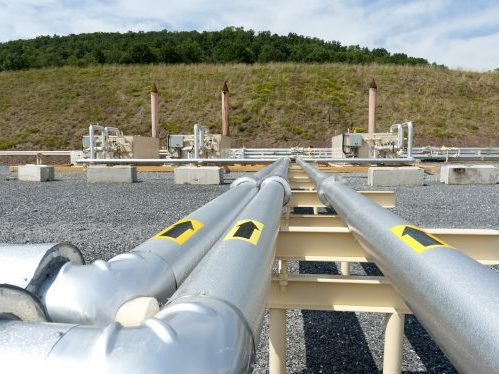 Max Phillips via Beyond Coal and Gas/Flickr

A 212,000-kilometre network of oil and gas pipelines now in construction or under development around the world could set investors up for US$1 trillion in stranded asset risk, while enabling 170 billion tonnes of carbon dioxide emissions over their full operating lives, Global Energy Monitor (GEM) warns in a devastating assessment released this week.

Despite early commitments by the Biden administration to rein in fossil fuel development, the industry’s construction plans imperil the emission reduction goals in the 2015 Paris Agreement and put pipeliners “on a collision course with commitments by most large economies to transition to carbon neutrality by mid-century, setting the stage for large amounts of stranded assets,” the organization states.

GEM adds that 82.7% of the pipelines under development, and 18 of the 20 longest ones, are meant to carry natural gas, reflecting the long-standing but obsolete industry myth that gas is a bridge to a renewable energy future.

“Last month the head of the European Investment Bank, the world’s biggest publicly-owned financial institution, remarked that ‘Gas is over’,” said GEM finance researcher and report co-author Greig Aitken. “It’s high time for other significant financial institutions, both public and private, to step up and follow the EIB’s lead in ending their support for oil and gas infrastructure projects and companies.”

The organization lists the United States as the world’s single biggest pipeline developer by capacity, with new projects totalling 19.6 million barrels of oil equivalent per day. “This expansion presents a major climate risk, since U.S. exports of liquified natural gas have the highest greenhouse gas intensity of any major exporter,” the release states, citing analysis by Boston Consulting Group. China is in the process of consolidating 32,800 kilometres of pipeline expansion under a single company, making PipeChina the world’s biggest gas pipeline developer.

Canada places eighth on the list based on pipeline length and fifth based on capacity, with 6,271 kilometres and more than 3.7 million barrels equivalent per day under development. Calgary-based TC Energy comes in seventh among developers of oil pipelines and 13th for gas, with 1,897 kilometres of oil 2,647 kilometres of gas pipelines proposed or under construction. The Royal Bank of Canada shows up seventh among pipeline financiers world-wide, sinking nearly US$3.9 billion into pipelines and terminals, while Scotiabank makes the top-20 list in ninth spot.

Although the COVID-19 pandemic has slowed demand for fossil fuels, GEM says the last year has bent the expansion curve but not broken it. Even as the industry’s social licence evaporates, with changing perceptions of pipelines as a “safe” investment, the report shows more than 100 financial institutions investing in shale pipelines in Texas’ Permian Basin. “While 50 major financial institutions have now implemented policies restricting support for tar sands or Arctic extraction,” the GEM release states, “only four so far have restricted pipelines.”

“For those who are counting, there are now more new policies being announced seeking to limit exposure to the oil and gas industry than those targeted at the moribund coal industry,” Guay writes. “In fact, in 2020, during the middle of a global pandemic and its associated recession, these policies were announced at a pace of one every month. The writing, as they say, is on the wall for oil and gas.”

And yet, “even sophisticated investors lack the breadth and depth of commitment to avoid the vast majority of speculative oil and gas investments,” he adds. Most of their policies “are exceedingly narrowly focused on removing financing for extreme projects” in the Arctic and the tar sands/oil sands, while still leaving room “for everything else under the sun. That includes midstream and downstream infrastructure like pipelines, liquefied natural gas terminals, and a wave of ethane crackers driving a global plastic pollution crisis. It also means industries like utilities and auto manufacturers that make up the bulk of demand for oil and gas. So while it’s important that the trend has begun, it’s more important that we get the details of these oil and gas exit policies right.”

The report lists seven options for the Biden administration to “change the heavily pro-fossil stance of the Trump administration” through executive actions, regulatory decisions and appointments, green stimulus, and putting an end to funding for overseas fossil fuel projects.

“The policy landscape facing the new administration in 2021 is radically different from the one that [U.S. President Joe] Biden left in 2017,” said lead author James Browning. “Fossil gas is now recognized as a climate buster, not a climate solution. That means Biden faces the tough decision to rein in gas infrastructure, which is the most effective way to limit emissions.”