Finnish City of Oulu Shows How Winter Cycling Can Rule 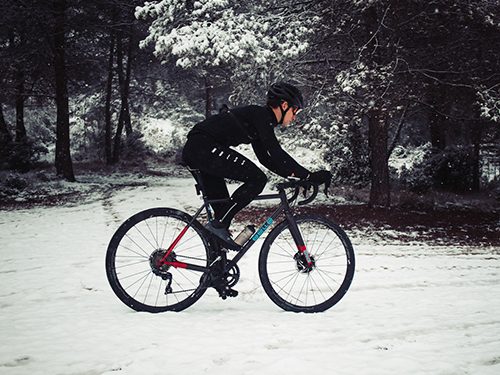 Though the blame for Canada’s dearth of winter cyclists is typically placed on weather, it is the lack of dedicated—and snow-cleared—bike routes that keeps people tethered to their cars and public transit, according to a video that profiles the 200,000-strong city of Oulu, Finland as Exhibit A for how to make winter cycling work.

The engaging and funny YouTube video calling attention to the February e-Global Winter Cycling Congress, Not Just Bikes, makes the case that cold temperatures and bicycles are actually a match made in winter heaven.

In very snowy and reliably frigid Oulu—considered the “winter cycling capital of the world”—22% of all trips are made by bike, and 77% of residents cycle “at least occasionally,” with riders ranging from the very young to the very old. Even among occasional riders, 50% ride all year round, with very few ditching the pedals even when the mercury plunges below -20°C.

So why are Canadians “such giant wimps?” asks Jason Slaughter of Not Just Bikes. The native of London, Ontario—evidently delighted by his current life in bike-friendly Holland—is (relatively) quick to point out that while Canucks may not actually be giant wimps, they are disinclined to use bike lanes in winter. But that’s because the routes really stop being anything like a bike lane at all once they get covered with ice or become a convenient dumping ground for snow ploughs.

With a network of safe paths and frequent, reliable snow removal in place, Oulu proves that a jacket, mitts, and a toque are all it takes to have a blast on a bike in winter (though he neglects to mention how a toque can fit under a helmet, hmmm). He also advises Canadian car habitués to understand that it isn’t all that cold out—at least not if you dress for it.

Oulu bats it out of the park on the snow-cleared path front, boasting 875 kilometres of separated paths and only 600 metres of painted lane, Slaughter says. And he stresses that Oulu is no dense, closely-packed “medieval town”: It closely matches the narrator’s Canadian hometown of London for its “car-centric sprawl,” and has almost identical population density.

The difference is in the way bicycle infrastructure is built and managed.

“In Oulu, all main bike routes are ploughed within three hours of a two-centimetre snowfall. And are ploughed multiple times per day if necessary,” he says. “There is literally zero reason why a typical Canadian city could not be like Oulu.”

And the same goes for all cities, very few of which do bike lane snow removal well. It happens in Oulu simply because bike paths are considered “important pieces of infrastructure that get people from point A to point B.”

Scanning for good news on the winter riding front in Canada, Slaughter says the situation is evolving, but at a “glacial pace”. Edmonton plows an eight-kilometre loop of bike lanes regularly (though only guaranteed within 24 hours of snow falling), while Montreal has witnessed a huge surge in winter cycling this past year, a trend that will be reinforced by its use of ice-crushing machines to reduce wipeouts.