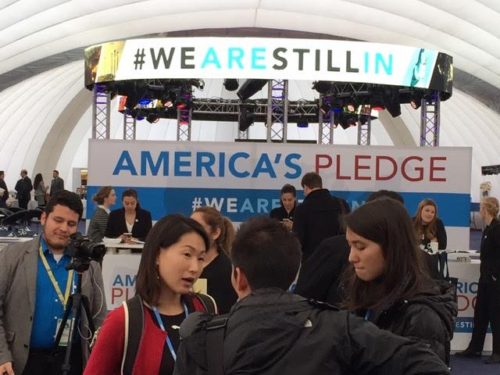 A White House led by a climate denier who was actively working to undermine global efforts to meet the targets in Paris Agreement made work hard for the 25 U.S. states that pledged to make good on their country’s promises under the 2015 deal. But even with Trump gone, progress is still being hamstrung by a tendency to equate action with electric power.

When Trump announced his intention to withdraw his nation from the Paris Agreement, the governors of California, Washington, and New York responded within hours, vowing that their states would do all they could to abide by the international agreement and its targets, writes Grist. The three governors founded the U.S. Climate Alliance, which soon grew to 24 states, plus Puerto Rico.

“If the president is going to be AWOL in this profoundly important human endeavour, then California and other states will step up,” said then-California governor Jerry Brown at the time.

Citing recent analysis by the Environmental Defense Fund, Grist now reports that the Alliance has struggled to reach its commitments, with member states likely to fall 8% short of their shared target of a 26% cut in emissions by 2025.

The underperformance is hardly surprising given the Trump-fanned headwinds, observes Grist. “Over the past four years, governors and state legislators have been swimming against the tide, trying to pass legislation and issuing executive orders even as the Environmental Protection Agency and the president openly worked to block their efforts.”

The EPA, for example, revoked California’s authority to set its own vehicle emissions standards, and in late 2019 the Federal Energy Regulatory Commission released a rule that made new renewables more costly and boosted coal production in 13 states.

But climate denial at the federal level has not been the only thing holding the Alliance back. “Broadly speaking, climate action at the state level has sort of equated to action in the electric power sector,” said Pam Kiely, senior director of regulatory strategy at the U.S. Environmental Defense Fund (EDF). But that has targeted only 28% of emissions—leaving cars, buildings, and industries like steelmaking out of the frame of action.

“We’ve got a lot to do in the transportation sector, in the built environment, in the industrial sector, and beyond,” Kiely told Grist.

Further hobbling state efforts, she added, has been widespread reluctance among state legislators to do the political heavy lifting. Grist cites a 2019 case of Republican senators in Oregon actually holing up in the woods in Idaho (and issuing over-the-top warnings to anyone intent on stopping them) to avoid having to vote on a climate change bill.

One state that has committed to the Paris target but has not joined the alliance is Louisiana—and alliance members have taken issue with its inclusion in the EDF analysis, saying it brings their numbers down. “The alliance’s own analysis, released at the end of 2019, projected that member states would slash emissions 20 to 27% by 2025—potentially meeting that Paris target of 26%,” writes Grist.

Now, Climate Alliance members are looking to the Biden administration, which returned the U.S. to the Paris Agreement within hours of taking power on January 20 and issued a flurry of climate-related executive orders last week.

Even so, it’s likely the group will continue to be left with the lion’s share of the work, said Jeff Mauk, executive director of the National Caucus of Environmental Legislators. After failing to see sweeping climate change legislation from the Obama government, he expressed doubt such solutions would come now, given the razor-thin Democratic hold on the Senate.

“People have learned the lessons from the last decade,” he told Grist.