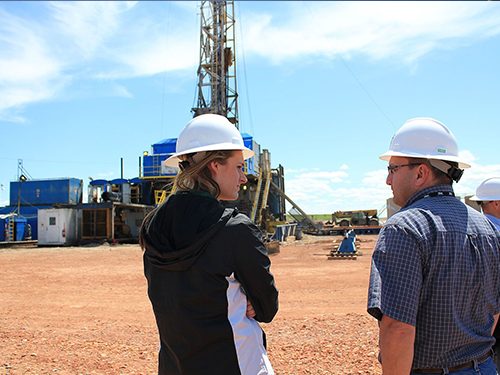 A new generation of young professionals is coming back with an eloquent response to the idea that a declining fossil industry is a “slap in the face” to people who’ve set their sights on careers in fields like geology or petroleum engineering.

While job prospects in the industry were dismal enough pre-pandemic, and have only declined since, there’s a growing sense that fossils themselves are set to lose the so-called “war for talent” unless they get a whole lot more serious about confronting the climate crisis—and their central role in bringing it about.

Early last month, the New York Times chronicled the sinking career paths of several university seniors or recent grads who are struggling to get hired as they watch fossils slash tens of thousands of jobs.

“The industry has attracted thousands of young people in recent years with the promise of secure careers as shale drilling took off and made the United States the world’s largest producer of oil,” the Times says. “But many students and recent graduates say they are no longer sure there is a place for them in the industry. Even after the pandemic ends, some of them fear that growing concerns about climate change will lead to the inevitable decline of oil and gas.”

But there are signs that the students who discussed their plight with the Times will soon be the exception more than the rule. “I imagine there wasn’t too much interest in going to work for typewriter companies back in the 1990s,” said Jamie Henn, director of Fossil Free Media. The same is true when it comes to oil and gas today.”

Henn said he’s watching a rapid decline in the number of students interested in a career in fossil fuels. “I think the truth is finally beginning to sink in that there isn’t a future for fossil fuels,” he told The Energy Mix in an email. “The writing has been on the wall for decades, but the pandemic threw everything into stark relief.”

But with fossils spending hundreds of millions of PR dollars per year perpetuating “a series of myths about how they’re indispensable to the economy” and “working on climate solutions”, there’s very little serious conversation “about what a managed decline of the fossil fuel sector is really going to look like,” he said. “That means we aren’t having the sort of serious conversations we need to be having, like about how many workers we need to keep employed in the oil and gas industry just to plug abandoned wells, manage leaky pipelines, and decommission aging infrastructure.”

And today’s students are in for deep disappointment until that message gets out.

“We got a slap in the face, an entirely unforeseen situation that rocked our entire mindset,” University of Texas senior Sabrina Burns, who’s due to graduate with a petroleum engineering degree in a few months, told the Times. “I have applied for every oil and gas position I’ve seen, like all my classmates, and nothing really has turned up. I’m discouraged.”

“You have a lack of available positions and you have a huge talent pool and an abundance of graduates getting out of school,” agreed Stephen Zagurski, a grad student in geology at Rice University. “It’s going to make opportunities to get into the industry that much harder.”

Burns said she recently started an internship with an engineering firm that specializes in energy conservation, and might eventually pursue a graduate degree in environmental science. That’s after her dad, a helicopter pilot, told her about successful female engineers working for fossil companies in the Gulf of Mexico, and her university profs talked up the industry’s prospects.

But she said some of her classmates had doubts about picking the fossil industry over renewables—as did an Uber driver who brought Burns and other students to a fossil industry banquet in 2018. “Did you ever hear of a solar panel?” she recalled the driver asking them.

“The silent judgment and passing comments weighed on me a lot,” she told the Times. In the end, she recommitted to staying with the industry and helping it shore up its environmental record.

The Times has more on the thinking that pulled some students toward the industry, and the challenges they’re facing now.

But in a recent post for Forbes, University of Houston (UH)Energy Scholar Emily Pickrell says many students’ deep concern about the climate crisis, beginning with their near-unanimous understanding that it’s real, is depriving fossil companies of the incoming “talent and enthusiasm” they will need to address the problem.

“Everyone teaching in the engineering programs is struggling with this issue,” said Dallas, Texas-based attorney Harry Jones, who told Pickrell he has several fossil clients facing recruitment issues.

“These kids have to commit to something for 30 or 40 years,” he said. “Why should they lock themselves into a profession that is less and less relevant?”

That leaves fossils with the reality “that eye-popping financial offers and the challenge of interesting work are no longer enough,” Forbes writes. “They are making great efforts to talk about incorporating climate change reduction plans into their work as a way of drawing top-drawer talent.”

But they may have a tough time making that work.

Pickrell says a 2019 survey by Abu Dhabi National Oil Company concluded that math and science students worldwide are choosing careers in technology, biotech, and medicine rather than oil and gas. A 2018 student survey conducted by UH and the U.S. Environmental Defense Fund found that 85% would want to work for a fossil company with serious climate policies, while two-thirds of respondents to a PricewaterhouseCoopers said they “would intentionally avoid an employer with a negative image of environmentalism,” she writes.

“The younger generation is not seeing changes happening on the energy side – they are not seeing fast enough progress,” explained UH Chief Energy Officer Ramanan Krishnamoorti. “The industry needs to find ways to accelerate that progress and not just talk about it as research and development, but truly commercial deployment of carbon management.” [After that, they might want to look at the 80%+ of their carbon footprint that occurs after they’ve shipped their product, then pumped their sequestered carbon back underground to produce even more oil.—Ed.]

Henn sees the fossils’ challenge going a lot deeper than just tinkering with technologies—or the messaging with which the industry surrounds them.

“Why would you want to work for an industry that is seemingly hell-bent on wrecking your future?” he asked. “There are still going to be some jobs in the fossil fuel sector in the future, but it’s going to be about keeping carbon in the ground rather than getting carbon out of it.