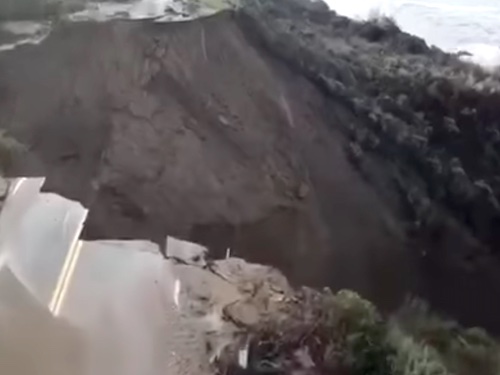 A section of the Pacific Coast Highway near Big Sur, California has collapsed into the ocean due to heavy rains and erosion.

While this isn’t nearly the first washout along the iconic coastal road, recent news coverage has pointed to its increasing vulnerability to severe weather and sea level rise. The New York Times has video of the latest incident.

“Highway 1 isn’t exactly new to this wrath,” writes motor1.com. “Its cliffside nature subjects the road to destruction during typhoons and heavy rains, sustaining damages that either partially or fully close the route. It isn’t news to people near the area anymore, which could make you think about the future of the famous thoroughfare decades down the line.”

In September 2019, the state Department of Transportation (Caltrans) released a climate vulnerability assessment that looked at the impact of extreme weather on roads and bridges in southern California. “While the reports are short on details about threats to specific pieces of infrastructure (those assessments will come later), they reflect on some problems that Caltrans is already dealing with, like what’s happening along our coast,” LAist wrote at the time. “According to the state’s sea level rise guidance, our area of coast could see between roughly two and six feet of rise by the year 2100, depending on the model.”

And meanwhile, “rising sea levels and increasingly intense storm surges could break down (the Pacific Coast Highway) from below, while an increased risk of wildfires and landslides could destroy it from above.” The story predicted “long, drawn out legal battles” as Caltrans and various stakeholders decide whether to protect existing roads and other infrastructure or move them completely.

“We are in the early, early stages of really trying to understand what the scale and ramifications might be,” said Chris Schmidt, the agency’s planning and modal programs manager for Southern California. “Is there a specific plan in place to make absolutely sure that what’s there today will be there 20, 30 or 40 years, or 50 years from now? No. There’s too much happening, too much change is under way.”

Schmidt added that “it’s really even hard to absorb the rate of change that is occurring. The level of threat is escalating at rates that even the climate change scientists did not anticipate. So even our best estimates of what might happen may be severely wrong.”

The LA Times published an in-depth feature on the “grim” choices coastal California will face as sea level rise continues.

Jason Kenney vs. the Plimsoll Line