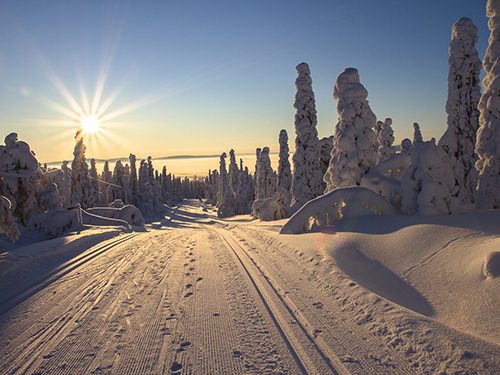 The self-described coldest town in Finland is making a pitch to host the 2032 Summer Olympics, with a mock promotional campaign that highlights the impacts of climate change in a place with an annual average temperature of -0.22°C/31.6°F.

“Yes, you read that right,” Grist reports. Salla, a town of 3,396 people that claims a population of two reindeer for every person, “is competing with Jakarta, Istanbul, and Seoul to host Olympic sports like track and field, swimming, and cycling.” The town released a promotional video and held a news conference last week in collaboration with #FridaysforFuture.

“We liked the idea because we are concerned about climate change and also because we live here in the Arctic Circle and we see the changes that are happening,” said Mayor Erkki Parkkinen. “We want the winters to be like they used to be, real winters.”

“The promotional video shows residents of Salla doing summer sports in the middle of a snow-covered winter landscape— a man applying sunscreen and surfing on a frozen waterfall, women playing beach volleyball amid snowdrifts, a shirtless man being pulled on water skis by a reindeer,” Grist writes. “Salla’s proposed Olympic mascot is Kesa, a reindeer who appears to be suffering from heatstroke.”

“In 12 years, the ice will be gone and this will be a perfect lake,” adds a man shown bathing in a frozen lake with an ice cream cone.

Grist points to the acute climate vulnerability behind the sarcasm. “Temperatures in the Arctic are rising at double the rate of the global average, and hit an all-time recorded high this past summer” at 100.4°F/38°C, notes reporter Alexandria Herr. “The Arctic also faced an unprecedented wildfire season in 2020. Many of these wildfires burned in carbon-rich peatlands, producing record-breaking carbon emissions. Some of the peat fires were ‘zombie fires’ that smouldered under snow and ice all winter and then re-emerged in the summer.”