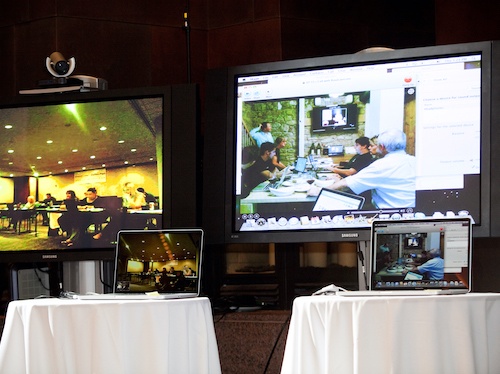 Far-flung field work and international conferences are part and parcel of climate research work—meaning scientists who study climate change can fly far more than their academic peers. But with the pandemic shaking up those norms, many now plan to remain virtual—and grounded—for as much and as long as possible.

Hybrid events that combine virtual and live elements, webinars, and distributed conferences are just a few of the ideas being pitched by climate scientists anxious to limit the footprint of their discipline, writes Nature.

“I don’t expect everybody to be taking the train to China to do fieldwork,” said researcher Roger Tyers, who did just that in 2018, travelling two weeks by rail from Southampton to his field centre in Shanghai. “But I think that as academics we can do a little bit better.”

“Look up ahead of time who’s going to be there, schedule coffees and lunches and breakfasts. Use every minute of your travel to maximize effectiveness,” she advised.

Another solution could be a hub model, “in which one large conference is replaced by several smaller meetings held simultaneously on different continents,” suggested Kim Cobb, a climate solution scientist at the Georgia Institute of Technology in Atlanta. “Scientists would then travel by train to their nearest meeting, and the hubs would be connected to each other virtually.”

Klöwer has calculated that making the conference biennial, shifting it east to the more central location of Chicago, and “encouraging the 36% who would have to travel farthest to participate virtually” could reduce the AGU’s travel footprint by a whopping 90%.

An added boon: if the May 2020 annual meeting of the European Geosciences Union is any indication, virtual conferences attract more people. Nature notes that the most recent EGU meeting “ballooned” to 26,000 from a typical attendance of 16,000.

Social platforms like Slack, Google Meet, and Zoom will also be vital, and not just to shrink travel footprints. University College London planetary scientist Divya Persaud told Nature that such platforms can actually be “warm, inviting” spaces, allowing for “some really excellent discussions during the poster sessions, which can be lacking at in-person conferences, particularly for women and minority scholars.”

Sören Thomsen, an ocean and climate researcher with the Laboratory of Oceanography and Climate in Paris, combines low-bandwidth videoconferencing software, YouTube, and a Q&A platform called Slido to connect researchers from Africa, Asia, and South America with his specially-designed webinars.

As many of his participants don’t have the means to attend international conferences, “the program is their only way to connect to the global scientific community,” writes Nature. “Thomsen designed the program with scientists from around the world, including Senegalese and Indian researchers who had never met in person.”

Trudeau Tree-Planting Plan to Run $2.78B Over Budget, PBO Warns