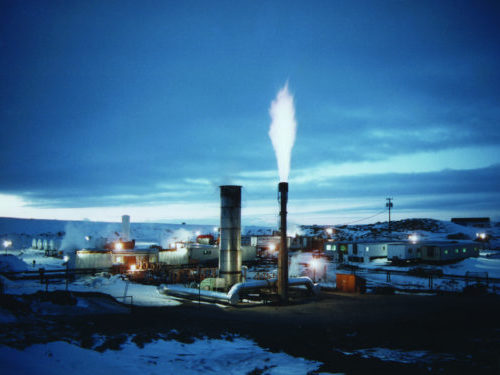 Two Alberta-based fossil companies are reporting that they’ve reached “net-negative” carbon emissions, thanks to carbon capture technology. But while the news sounds promising for CCS—which experts increasingly believe will be necessary to keep average global warming below 2°C—there are still concerns about how emissions reductions are calculated, and how CCS may reduce the incentive to actually reduce emissions.

As part of its CCS strategy, Calgary-based Enhance buys CO2 from two heavy emitters located near Edmonton (a refinery and a fertilizer plant), then transports the gas via the $1-billion, purpose-built Alberta Carbon Trunk Line pipeline to its facility near Red Deer. There, it is used to extract oil in a process known as enhanced oil recovery (EOR), reports CBC News.

Thus the ability of the company to claim “net negative” emissions: “Because they’re getting the CO2 from the two large plants but only extracting a small amount of oil at this point, on balance, they say they’re burying more CO2 than their oil will produce.”

Enhance executives say the company pumps about 4,000 tonnes of CO2 underground every day, “the equivalent of taking 350,000 vehicles off the road,” CBC writes.

With Canada’s rising carbon price set to hit C$170 by 2030, Enhance CEO Kevin Jabusch is now pitching his oil company as a “carbon mitigation” business. “If the carbon tax rises as expected, the day might come when Enhance no longer will need to produce oil anymore to be profitable,” he said.

Meanwhile, Enhance continues to produce oil—and has plans for a lot more, courtesy of EOR. “Production from Enhance’s Clive field is around 200 barrels of oil per day, but with CO2 injection, the company expects output to gradually grow to between 4,000 and 5,000 barrels per day over the next five years,” CBC reports.

And yet Jabusch still ranks his company on the “climate helper” side of the ledger: “We’re very (carbon-)negative today over the full cycle of our of our operation, and in the long term, we think it would be very close to zero,” he said.

Running a “similar, but much larger” carbon capture project near Weyburn, Saskatchewan, Calgary-based Whitecap has a direct line to emissions being captured “from a coal power plant in the province and from a coal gasification facility in neighbouring North Dakota.” According to a Whitecap executive, the company has injected and stored about two million tonnes of CO2 in each of the last two years.

Unlike Enhance, “Whitecap does not account for the emissions that will be generated from the eventual use of its oil, saying it has no control over how it is used, making it difficult to calculate,” CBC says.

The wide variation in calculating both emissions and carbon capture could allow a lot of room for double counting, prompting calls for clarity, the national broadcaster explains. “If the emissions from a power plant are used by an oil company to increase the production of an oilfield, both companies can’t take credit for the carbon capture project.”

Also troubling to some environmental leaders: while storing harmful emissions underground may be better than releasing them to the atmosphere, CCS technology may just be enabling the status quo, delaying uptake of renewable energy and undercutting the work to reduce fossil use.

Others, however, see investment in CCS technology, and in EOR in particular, as necessary, given the pressure of time and the slow pace of change.

“The science is fairly clear,” said Pembina Institute analyst Jan Gorski. “We are going to need carbon capture in order to tackle the climate crisis.”