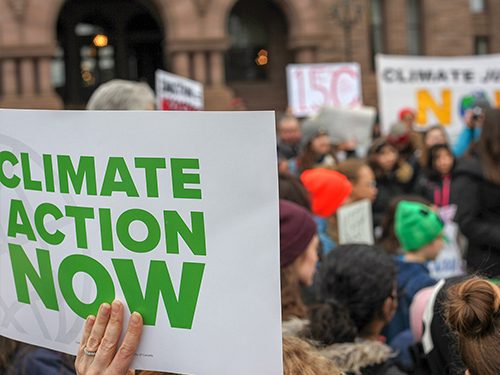 The biggest climate survey ever conducted has confirmed that nearly two-thirds of people around the world see climate change as a “global emergency”—a mandate for action that is clear and unquestionable. And with the desire for change even higher among young people, it’s also clear that education has played a big role in the groundswell.

Organized by Oxford University and the United Nations Development Programme (UNDP), the People’s Climate Vote survey reached “more than 1.2 million people in 50 countries” this past December. That tally included 550,000 younger constituents reached via pop-up polls on online games like Angry Birds and Dragon City, reports the Globe and Mail.

The poll revealed an ongoing demographic divide, with older people 12 points less likely than younger people to perceive global warming as an emergency.

Italy and the UK registered highest in the perception that global warming is a five-alarm fire, both coming in at 81%. The two countries are to co-host this year’s UN climate conference, COP 26, in Glasgow in November.

In a separate report on the study, The Canadian Press writes that Canadians “are more concerned about the issue than most,” with 75% of those surveyed agreeing that the climate crisis is an emergency. Older respondents in Canada were nearly on par with younger citizens in their alarm at the climate crisis, at 72%.

Also notable: 75% of Canadians polled, regardless of age, “said action should be urgent and on many fronts,” while 69% agreed that polluters should pay. “Only the United Kingdom, at 72%, registered stronger among high-income countries,” CP notes.

But a gender gap did appear in Canada, with women and girls 12% more likely to rate the crisis as an emergency than men and boys. “Globally, there wasn’t much difference” based on gender, the news agency adds.

The Guardian notes that respondents from fossil fuel economies showed strong support for renewable energies, citing Australia (76% ), the U.S. (65%), and Russia (51%) as cases in point. Meanwhile, BBC News reports that the survey revealed a “high correlation” between educational attainment and belief in the climate emergency.

The survey listed 18 climate solutions, asking respondents to rank them in order of priority. The BBC reports that conservation of forests and land came out on top (54%), closely followed by renewable energy (53%), climate-friendly farming (52%), and the greening of business and jobs (50%). Plant-based diets placed last, at 30%.

CNRL, Imperial, 11 Others Face Rating Downgrades Due to Competition from Renewables