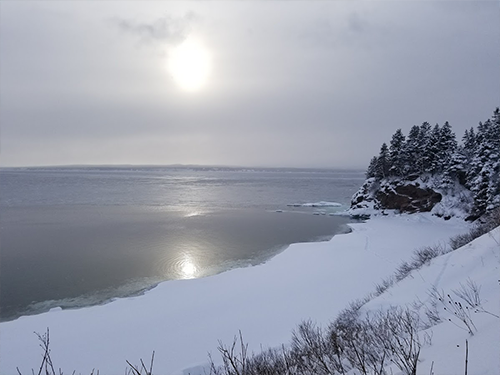 Deep waters in the Gulf of St. Lawrence are hitting record highs that fall far beyond normal variations, part of a decade-long trend emerging from research released earlier this week by the federal Department of Fisheries and Oceans (DFO).

“It is scary to me because we’re completely outside of the known envelope,” DFO research scientist Peter Galbraith told CBC. “When you are one degree, a half a degree outside anything that’s been known before those 100 years, then that’s like uncharted territory for fisheries management.”

Water temperatures at various depths “were higher than any measured in the Gulf since records started in 1915,” the national broadcaster reports, reaching highs of 5.7, 6.6, and 6.8°C at depths of 200, 250, and 300 metres. “The report on physical oceanographic conditions also said temperatures last year were notably warmer in deep water at the entrance to the Gulf in the Laurentian Channel and the Cabot Strait between Nova Scotia and Newfoundland.”

While the impacts on marine life are a key question, the problem is that there’s no past record to use as a point of comparison, Galbraith explained.

“A whole lot of species will be affected,” he said. “The scary part is that we can’t rely on past observations that would be similar to guess at what the ecosystem is responding, because it was never similar.” While an increase of 1.5°C “might not seem a whole lot,” he added, “for biological species that are used to really, really stable temperatures, increasing from 5.2 to 6.7 is a big deal.”

In July, the Gulf’s inland estuary also recorded its highest surface temperature since record-keeping began in 1982, before high winds brought readings down to record lows in September, CBC says. “We lost 3.7° in one week, basically,” Galbraith recalled. “The warmest week in nearly 40 years of observations to the coldest September in 40 years.”

Then January arrived with no sea ice in the Gulf because, despite a cold snap, water temperatures remained above 1°C.

Galbraith “said the warmer deep water, which is slowly sucked into the Gulf from the Atlantic, will likely keep the Gulf warm for years,” CBC writes. “An unusually cold year could provide a reprieve, but it has not materialized in the past decade.”