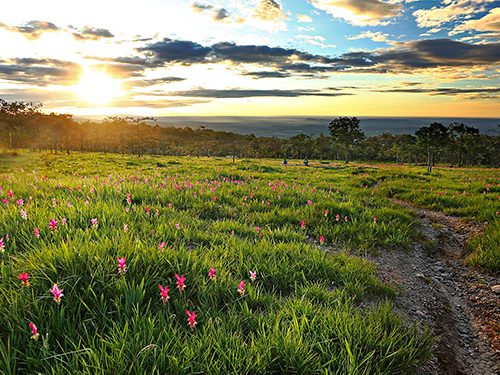 Forest conservation as a carbon reduction strategy has led to a trammelling of human rights for forest dwellers around the world, but it need not be this way: managed with human rights at the forefront, legally protected community lands are a proven boon to both climate and people.

“Globally, Indigenous and local communities own more than half of all land under customary rights, but only have secure legal rights to about 10%,” reports the Thomson Reuters Foundation, citing data from the Rights and Resources Initiative (RRI).

About two billion Indigenous and rural people currently live within conservation areas around the world, says Thomson Reuters. RRI estimates that 15 countries evicted more than 250,000 of these people from their homes between 1990 and 2014 as part of efforts to prioritize conservation as a path to emissions reduction.

But in doing so, these countries lost the opportunity to achieve the same goal with no displacements. Had they prioritized the well-being of the people who lived within the legally recognized community lands being “preserved,” the countries would have found themselves richer in carbon stores, with “significantly lower deforestation rates” and lower emissions.

“A great incentive for communities to contribute to the sustainable management of forests is community forestry or land titles, which provide a degree of tenure security,” said Daniel Hayward, a coordinator for the Mekong Land Research Forum at Chiang Mai University in Thailand. “There is no need for conservation needs and human rights to be kept separate.”

But such separation remains, as yet, too common in Thailand, where forests “have long been contested sites between the government, corporations, Indigenous people, and farmers.”

Case in point: the experience of some 200 farmers who are several generations into raising cassava and maize in a forest in the country’s northeastern Chaiyaphum province. The region was protected as Sai Thong National Park in 1992, but the farmers were able to remain in their homes until 2014, when they were evicted under a new law.

“The forest reclamation order, enforced by a military leadership, aimed at ending encroachments and conserving natural resources,” explains Thomson Reuters. “It led to a redrawing of forest boundaries and hundreds of evictions, according to land rights groups.”

When a number of those evicted returned to the park—having no other means to make a living—they were charged with trespassing. One farmer, aged 63, “was sentenced to 17 months in prison and a fine of more than 100,000 baht (US$3,335) for trespassing.”

Now out on bail, he and his fellow farmers “are awaiting a Supreme Court hearing while they try to reach an agreement with local authorities for a community title to the land.”

While a new Thai national parks law enacted in 2019 does allow those who live “in or near the more than 100 parks in Thailand to access them and use some resources,” permission to actually live by this law is not automatically granted, notes Thomson Reuters.

“The National Parks Act also curbs land use rights to 20 years and limits each family to about 3.2 hectares, which land rights groups say is inadequate.”

Oranuch Phonpinyo, a coordinator with the Isan Land Reform Network, said the new law “does not resolve conflicts, as it continues to treat people who depend on the forests as criminals.” She further condemned the injustice in “denying forest dwellers…their livelihood, their tradition and dignity, while these parks are opened up for city dwellers and tourists to enjoy.”

Thailand is currently aiming to increase its forest cover by nearly 10%, to reach a total of 40% of its land area. Land Watch said that goal “threatens millions of people living in or near forests, with thousands jailed every year for trespassing,” writes Thomson Reuters.

But positive change may be coming. The Thai government recently released data showing that the country’s 12,000-plus community forests provide benefits to about three million people, and the country is pledging to issue more such community land and forestry titles.

“It is a slow process, but quite a few communities have already got titles, and we are studying others,” said Minister of Natural Resources and Environment Varawut Silpa-archa.

“People who had been living in forests before they were declared parks can now stay and collectively manage the land, as long as they conserve the ecosystem and do not sell the land,” adds Thomson Reuters.

As Indigenous peoples in Thailand lack legal recognition, these community land and forestry titles can add a layer of protection from being displaced by “fortress” models of conservation that seek to expel human beings from the forests that are their ancestral, and present, home.