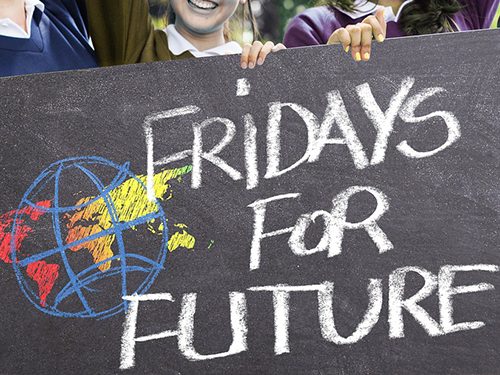 Youth climate organizations like Fridays for Future have proven themselves to be non-partisan, passionately intersectional, and naturally animated by a dauntless “get-it-done” spirit. With such extraordinary power and capability in their hands, younger people must have a seat at the table on climate policy, two youth activists say.

They’re urging the Biden administration—and policy-makers around the world—to ensure this happens. In a post for Grist, Piper Christian, who helped pass Utah’s first resolution recognizing climate change in 2018, and Michelle Diane Hernandez, co-founder and co-facilitator of the Cities Working Group for the United Nations Framework Convention on Climate Change’s Official Youth Constituency, explain why applauding young voices is not enough.

“Young people’s leadership has elevated the climate crisis so effectively that it is now a priority in the White House,” they write. “But we are capable of more than activism. Given the opportunity to collaborate with lawmakers and leaders, we can push meaningful climate policies.”

One critical ability young activists may possess is the power “to overcome the partisanship and polarization within climate politics, which is less of a problem among millennials than older generations, as younger conservatives increasingly join the movement.”

Citing the case of Mari Copeny, the 14-year-old activist who helped bring the Flint water crisis to national attention, Christian and Hernandez add that today’s younger generations are far more inclined to view the climate crisis through the lens of intersectionality, alert to all the ways that its impacts do not fall evenly across the lines of race, class, gender, and disability.

As for the contention that youth lack expertise with crafting policy, the advocates note that this factor comes with a “unique understanding” of the climate crisis. That is, young people’s very inexperience “grants us the imagination to conceive of transformational solutions.”

The motivation among younger people to create better policy is also—to say the least—quite high, given that systemic change may be the only hope for a secure future.

But the door is not always open. “Unless young people have a personal connection to someone in government who will champion them, they often are left out of the policy-making process,” write Christian and Hernandez. “That’s why states and cities must create youth climate advisory positions and climate councils with the power to make policy recommendations, oppose environmentally harmful measures, and hold officials accountable to follow through on climate-action plans.”

Along similar lines, youth climate activists from the Global South—including Fridays for Future representatives from Uganda, Pakistan, and Colombia—have published an open letter to President Joe Biden and Vice President Kamala Harris, asking them to demonstrate moral and political courage by putting climate policy into action. Citing harrowing personal experience from being in the crosshairs of the crisis, they urge Biden and Harris to understand that time is running out.

“The next four years will decide whether we can limit temperature rise to 1.5°C,” they write. “Your place in history makes you the last administration able to act in time.”

The youth stress that “net-zero targets for 2050 are too late,” and that the vaunted Green New Deal could itself be read as further testament to the Global North’s longstanding determination to secure its own interests ahead of all else.

“Current levels of warming of 1.2°C are already hell for millions of people,” they write. Countries like Argentina and the Philippines and Indigenous populations in the north are already feeling disastrous effects, while corporations continue to evade any accountability “beyond domestic climate goals and carbon emissions.”

What’s needed, say the signatories, is “climate justice that includes racial justice, gender equality, and equity.” If the Biden administration truly wants to separate itself from previous governments—including Biden’s own term with the Obama administration—it will have to do more than “spew out empty promises.”

So, they ask, will Biden and Harris walk their talk?

“Will you challenge the systems that started the climate crisis? Will you ensure that just recovery and transition is led by marginalized groups to ensure fair implementation? Will you keep your promises? Or will you celebrate your vague 2050 targets, which we won’t even reach according to the science?”

The Global South, they add, is waiting for an answer—in the form of action. “The time for lies is over. Fulfill your duties. We expect a reply. #NoMoreEmptyPromises.”