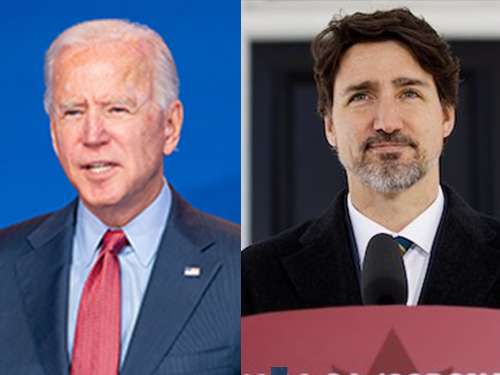 With U.S. President Joe Biden making climate action a top priority for his new administration, and an analyst warning that the Keystone XL pipeline cancellation will stifle Alberta’s fossil industry for years, Canada’s U.S. ambassador is saying that it’s time to move on and focus on other opportunities in the bilateral relationship.

“It’s obviously very disappointing for Albertans and people in Saskatchewan who are already in a difficult situation,” Kirsten Hillman told CBC’s The House Saturday. “But I think that we need to now focus on moving forward with this administration, and there are so many ways in which we are going to be aligned with them to our mutual interest that I’m eager to get going on that.”

After Biden issued his Day One executive order Wednesday, analysts said the announcement was not unexpected, and would have less impact on the industry than then-president Barack Obama’s original cancellation decision in November 2015. But Richard Masson, executive fellow at the University of Calgary’s fossil-affiliated School of Public Policy, said the new reality “puts a damper on investment expectations,” when new dollars going into fossil fuel development in Canada have already fallen from C$80 billion in 2014 to $24 billion last year.

Two other export pipelines, the Trans Mountain pipeline expansion and the Line 3 pipeline, “will provide enough capacity to allow oil production to grow into the second half of this decade,” CP writes, summarizing Masson’s comments. “But uncertainty about future capacity makes it impossible for producers to make decisions about new multi-billion-dollar oilsands projects, which could take five years or more to plan and build, despite growing demand for heavy oil from U.S. refiners seeing dwindling imports from Venezuela and Mexico.”

The report suggests Masson may not [choose to] give much credence to an assessment last fall, in which the Canada Energy Regulator concluded that neither Keystone nor Trans Mountain would be needed if the Trudeau government delivered on the climate plans it had introduced to that point. Less than a month later, Ottawa announced a somewhat more ambitious plan.

Hillman told CBC Canada is still the “best partner” to help the U.S. meet its energy needs. “But we have to recognize that the Biden administration has put fighting climate change at the centre of their agenda,” she said. “Not only their domestic agenda but their international agenda.”

Former secretary of state John Kerry’s appointment as White House climate envoy, she added, “provides a lot of opportunities for green tech, for Canadian clean energy, for working together on emission standards, for innovation in our automotive industry.”

Globe and Mail columnist Adam Radwanski agrees that Biden’s determination to lead in the climate fight “changes everything”, observing that “for the first time, a holder of the world’s most powerful elected office is treating climate change as the existential challenge that it is.” He adds that “the flurry of executive orders Mr. Biden issued as he began his presidency this week, the manner in which he is structuring his administration, and the massive investments that he is promising are already sending a signal that should reverberate in political backrooms and executive boardrooms around the globe.”

It isn’t just that Biden is evidently willing to ruffle feathers with decisions like the Keystone cancellation.

With Trump in the Oval Office, “other world leaders who prioritized greenhouse gas reduction did so in spite of Washington, and climate deniers were given comfort,” Radwanski writes. “Now, the White House will not only join the effort, but wield its moral authority to expedite it in a way that it hasn’t even under previous Democratic occupants. And that could not come at a more pivotal time, as countries prepare a post-pandemic economic rebuild, in the same year that their leaders will meet to set new emissions reduction targets to replace those in the Paris Agreement.”

That will translate into an immediate pivot for Canada. During the Trump years, “if anything, [Prime Minister Justin] Trudeau had to be concerned about hurting Canada’s competitive position by moving too quickly,” he adds. “Now he may need to worry about keeping pace, not least to avoid this country’s burgeoning clean technology sectors from being left behind.”

Radwanski lists fuel economy regulations, methane controls, and Biden’s renewed focus on the social cost of carbon as early priorities with implications for the bilateral relationship—and points to a feature of Biden’s approach that should be of particular interest to Canadian observers.

“Politicians of all stripes, as well as leaders of industries resistant to the climate transition, need to take note of who, in particular, is leading the U.S. into this new era of action: a president who, over the course of his long career, has built a reputation not as an activist, but as a cautious pragmatist who adapts to the world’s shifting demands and expectations,” he writes.

After Biden and Trudeau met for an introductory call Friday—Biden’s first outreach to a foreign leader after his inauguration—Reuters says the two agreed to meet up next month, while The Guardian reports they identified the COVID-19 pandemic and climate change as two early areas for cooperation.

“It was a very positive call,” a Canadian government source told Reuters. “Biden really has a fondness for Canada. He understands that we are a partner and ally of the United States, which is a marked change from the last four years.”

The two leaders “agreed to expand cooperation on continental defence and in the Arctic, and said their top defence and foreign affairs officials would meet at the earliest opportunity,” The Guardian says. They also discussed concerns that Buy American provisions could hamper Canadian companies’ ability to bid on elements of Biden’s US$400-billion infrastructure plan or his $2-trillion climate and clean technology initiative—an issue Hillman said she’d been discussing with top-level White House advisors “less than an hour after the end of the inauguration ceremony” on Wednesday.

Early indications are that those overtures may have worked. On their call Friday, “Biden reassured Trudeau that the intention of his proposed Buy American rules for a massive government procurement program was not to impact Canada,” and “the two leaders agreed to continue to consult on the policy,” the Toronto Star reports. “While the official said Biden did not rule out the possibility of future impacts on Canada, the president’s message could soothe fears of business leaders in this country about the prospect of ongoing trade tensions with Canada’s largest economic ally after four tumultuous years.”

The official also characterized the call “as much lengthier and more substantive than the typical calls between Trudeau and Trump, which often lasted just a few minutes,” the Star says.

Meanwhile, the executive order may be triggering or reinforcing some new thinking in Alberta. Calgary Economic Development President and CEO Mary Moran told the Calgary Herald it’s time to “get on with the diversification strategy.”

“This continuation of not being able to get our product to market, yet having solutions for global climate actions, is really quite disappointing, not just because we’re going to have more office space, but when it comes to people it will result in the shedding of more jobs and we already have the highest unemployment in the country,” she said. “We’ve got to figure out how these people that have chosen to keep Calgary their home, how we get them retrained to go into other industries.”

Moran listed technology, agriculture, and aerospace as sectors where Calgary could aim to expand its economy. “Even if the oil and gas industry comes back, it will not be the mega-job creator,” she said. “We need many paths for these people if we want to retain them.”

Extreme drought and fire risk may double by 2060