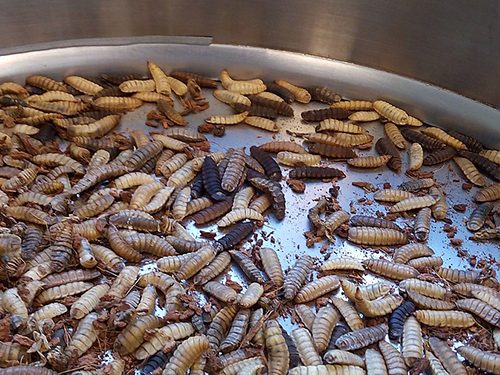 Hardy, easy to breed, and above all voracious, insect larvae are being recruited to the cause of bio-waste treatment, an innovation critical both to building a circular economy and lowering emissions.

Founded in 2018, TicInsect is piloting Switzerland’s first bio-waste treatment plant, with tens of thousands of black soldier fly larvae as the work force that will turn tonnes of organic waste that would otherwise be incinerated into animal feed, biofuels, and fertilizers, reports SWI, the international arm of the Swiss Broadcasting Corporation.

Growing from a tiny speck to centimetres long in under three weeks, the larvae can gobble up a pizza in just a few hours, bio-converting it, along with any other food waste, into proteins and fats that can then be processed—along with the wee gobblers themselves—into a range of useful products.

“From 100 kilos of organic mass we can extract 10 kilos of protein for animal feed, five kilos of fat to produce biofuels, and 20 kilos of fertilizer,” said Elisa Filippi, founder and CEO of TicInsect. “The rest is water, which evaporates.”

The innovation could have profound and positive consequences for the planet, says SWI. Animal feeds produced with the help of the bugs could replace fishmeal and soy-based feeds, demand for which is a key driver in the ongoing devastation of both oceans and tropical rainforests.

And there’s more: whereas fishmeal and soy-based feeds typically need to be transported over vast distances, larvae farms such as TicInsect are easier to reproduce locally. And also unlike fishmeal and soybeans, insects are a natural food source for most pets and livestock.

This larvae-based production is almost a closed-loop system, added Filippi, noting that the process uses very little in the way of resources, including water. An additional bonus: “With the fat from the larvae, clean energy can even be obtained to run the plant,” she said.

But there is one important caveat: “For the production of animal feed, it is forbidden by law to feed the larvae meat or fish, in order to prevent any outbreaks similar to mad cow disease.” That’s why TicInsect uses only vegetable waste, “stemming mainly from agri-food industries.”

Meanwhile, the Canadian Press reports that British Columbia-based insect protein producer Enterra Feed Corporation has received C$6 million in federal funds for its 17,500-square-foot animal feed production factory, which has been setting black soldier fly larvae loose on food waste since 2007. The company currently reaps 10 tonnes of high-protein feed per day to sell to pet food, poultry, and wild bird markets in North America and Europe, “along with 10,000 to 15,000 tonnes of organic fertilizer.”

A further boon to insect-driven bio-waste treatment: the reduction of greenhouse gases. CP notes that “8% of all greenhouse gases worldwide are the result of food waste”. And the original edition of Drawdown listed food waste as the third-biggest opportunity to reduce emissions—to the tune of 70.53 gigatonnes by 2050 if global waste could be cut by half.