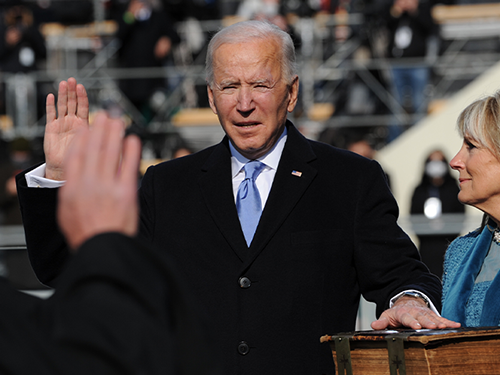 News reports Wednesday heralded the dawn of a new era in U.S. climate, energy, and environmental justice policy, as President Joe Biden marked his first day in office by signing a wave of executive orders to begin rolling back four years of deregulation under Donald Trump.

“Biden has declared climate change one of the four top issues for his administration,” Politico Morning Energy writes, and he got started down that road with orders to return the U.S. to the Paris Agreement and cancel the presidential permit for the Keystone XL pipeline. Those and multiple other Day One executive actions “reorient the U.S. toward putting the country on a path to eliminate planet-heating emissions on the power grid by 2035 and economy-wide in 2050,” touching on more than 100 specific actions Trump had taken.

“There’s no time to start like today,” Biden told media in the Oval Office as the signing marathon began. “I’m going to start by keeping the promises I made to the American people.”

On top of the Paris and Keystone orders, “Biden called for revising emissions standards for cars, methane, and appliances, as well as pausing oil and gas leasing in the Arctic National Wildlife Refuge and reviewing the boundaries of national monuments Trump downsized,” Politico adds. “The new president called for a review of other Trump-era rules that came out of the Interior Department, including its loosening of offshore drilling safety standards. He also reinstituted an interagency group to [re]develop a social cost of carbon and directed agencies to review regulations and actions Trump initiated ‘that were harmful to public health, damaging to the environment, unsupported by the best available science, or otherwise not in the national interest’.”

“At this moment of profound crisis, we have the opportunity to build a more resilient, sustainable economy, one that will put the United States on an irreversible path to achieve net-zero emissions,” said incoming White House domestic climate director Gina McCarthy.

“The sweeping directives laid a road map for the work ahead on the climate crisis,” a team of writers at Inside Climate News reports. “It’s an urgent plan, predicated upon Biden’s belief that there is no time to waste.”

“The last four years have been an unrelenting assault on our public health and environmental protections on an unprecedented scale,” said Jill Tauber, Earthjustice vice president of litigation for climate and energy. “But while we’ve lost a lot of time,” she added, Biden’s rapid response Wednesday indicates a commitment “to as swiftly as possible reverse the destructive policies of the Trump administration and also recognizing that that’s not enough.”

“It will be an enormous and impressive list for the new administration to get through,” said Columbia Law School professor Michael Gerrard. But “each agency has a staff that has been waiting to be unleashed, and that will be thrilled to get back to their primary mission.”

Inside Climate has lots more detail on the transition here.

After Biden made good on his promise to recommit to the 2015 Paris Agreement on Day One of his presidency, “diplomats and green groups breathed a collective sigh of relief—before urging him to step up cuts to U.S. emissions,” Reuters reports. “The process to re-enter the international accord takes a month, meaning the United States will only officially have been out of the deal for a short time since exiting in November.”

But it will take more to restore the country’s credibility and momentum in international climate diplomacy after four years of “Trump’s hostility to the UN climate process and his support for polluting fossil fuels,” the news agency notes.

“Rejoining the Paris Agreement is really the floor, not the ceiling, for the Biden administration on climate,” said Greenpeace International CEO Jennifer Morgan. And if the next step is for the U.S. to champion international commitments to faster, deeper carbon cuts, the country will be well advised to proceed from a position of “partnership and humility, not coming back in and telling everyone what they should be doing”.

Observers and analysts have been pointing out elsewhere that it didn’t take Donald Trump to make the U.S. an often obstructive voice in UN climate negotiations—for years and decades before, vastly saner administrations were slow to commit on key issues in the UN climate process, most notably international finance for decarbonization and climate adaptation in poorer countries, and compensation to vulnerable countries for the unavoidable impacts of climate disasters.

Rachel Cleetus, climate and energy policy director at the Union of Concerned Scientists (UCS), told Reuters the new administration will have a number of opportunities this year to help advance “a progressive climate agenda” on the world stage. “Those include the G7 and G20 leaders’ summits, and the UN climate talks in November,” the news agency writes.

Some of the same thinking shows up in a Politico post on what the world expects of former U.S. secretary of state John Kerry as the new U.S. climate envoy.

“The demands fall into two categories, according to interviews with more than 20 officials and advocates across Europe, Asia, Africa, the Americas, the Middle East, Australia, and New Zealand,” Politico writes. “The first: that the U.S. Congress backs Kerry’s rhetoric with tough domestic emissions reduction legislation. The second: that Kerry himself plays the role of the world’s climate cheerleader, prodding laggards and increasing financial aid to convince reluctant governments to set aggressive climate goals, such as reaching carbon neutrality by 2050.”

While European Commissioner Frans Timmermans pointed to a “huge opportunity” for his continent to work with the Biden administration, “we also have to take into account the United States coming back to the international scene, in terms of wanting to contribute to multilateralism again,” when “it’s a different world,” he told an event Monday. “So we are not going back to the Obama years.”

But if the EU and the U.S. can find common ground on their climate priorities, he added, “the Chinese will want to show that they are ambitious, as well, and that will really create a positive momentum leading up to Glasgow,” where the next UN climate conference is set to convene in November.

Several of the officials approached by Politico said it’ll be up to Kerry and his new administration colleagues to restore international confidence in the U.S. as a trusted partner for net-zero action. The first move will have to be to “step up to repair a lot of damage that was done internationally” by Trump’s withdrawal from the Paris accord, said former UN climate secretary Christiana Figueres.

And even then, Kerry can expect a lot of skepticism—not only after the Paris pullout, but after former U.S. president George W. Bush foreshadowed Trump’s misbehaviour by withdrawing from the 1997 Kyoto Protocol. “What is, four or eight years from now, going to stop another Republican president from withdrawing again?” asked New Zealand Climate Minister James Shaw.

Against that reality, “we need Kerry not only to scream that America is back, but to make up for lost time, and to buy back their credibility by going to a front-running position,” said an advisor to Netherlands Prime Minister Mark Rutte.

“I don’t think you have any credibility in the international system unless you’re walking the walk at home,” agreed Obama-era White House counsellor John Podesta, who also appeared at a GreenPAC webinar earlier this week. “If you don’t do that, it’s just words, words, words.”

Politico has more on the U.S. return to international climate negotiations.