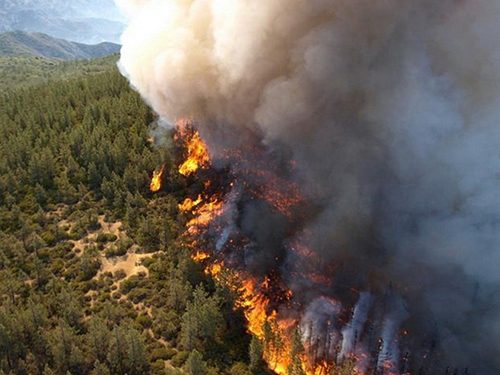 Wildfire smoke contains microbes, a fact that’s often ignored, but one that may have important health repercussions, Wildfire Today reports.

In 2008, Captain Matthew P. Moore, a firefighter with the Murrieta, California Fire Department, died after being infected with a rare brain-eating amoeba that usually lives in soil. A biopsy showed his brain had been invaded by the parasite Balamuthia mandrillaris, which enters the body through the lower respiratory tract or through open wounds. It is believed Captain Moore inhaled the parasite while fighting wildfires.

In an article published December 18 in the journal Science, Leda Kobziar and George Thompson called the attention of the scientific community to the health impacts of wildfire smoke’s microbial content.

Smoky skies caused by wildland fires are becoming seasonal norms, especially in some parts of the United States and Australia. In 2020, wildfires in the Western U.S. set new records and led to extremely unhealthy or hazardous air quality levels for many weeks in a row.

It’s well-documented that exposure to wildfire smoke can damage the heart and lungs. Respiratory, allergic, and inflammatory diseases, including asthma and bronchitis, are also worsened by smoke exposure.

“The health impact of inhaling wildfire smoke increases dramatically during high-emissions wildfires and with long exposure,” said Kobziar, associate professor of Wildland Fire Science at the University of Idaho. “Yet, the risk of infection to the respiratory tract after this exposure is frequently overlooked.”

Wildland fire is a source for bioaerosol, airborne particles made of fungal and bacterial cells and their metabolic byproducts. Once suspended in the air, particles smaller than 5 micrometres can travel hundreds or even thousands of miles. Their movement depends on the fire behaviour and the atmospheric conditions.

Bacteria and fungi can be transported in these wildland fire smoke emissions. The consequences for more immediate populations, such as firefighters on the front line who often spend up to 14 consecutive days in smoky conditions, are likely greater, given that microbial concentration in smoke is higher near the source of a fire. For example, the U.S. Centers for Disease Control and Prevention counts firefighting as an at-risk profession for coccidioidomycosis, an infection caused by a pathogenic fungus well known to be aerosolized when soils are disturbed.

“We don’t know how far and which microbes are carried in smoke,” said Thompson, associate professor of Clinical Medicine at UC Davis. “Some microbes in the soil appear to be tolerant of, and even thrive under, high temperatures following wildfires.”

As Kobziar explained, “At the scale of a microbe, fire behaviour research has shown that heat flux is highly variable, so it may be that many microbes aren’t even subjected to the high temperatures for very long. They may also be protected in small clusters of particulate matter.”

The potential for wildland fire’s microbial content to affect humans who breathe in smoke, especially from high-emissions wildfires or for multiple weeks, is appreciable. How far and which microbes are transported in smoke under various conditions are critical unknowns, but the relevance of these questions is increasing with longer wildfire seasons and higher severity trends.