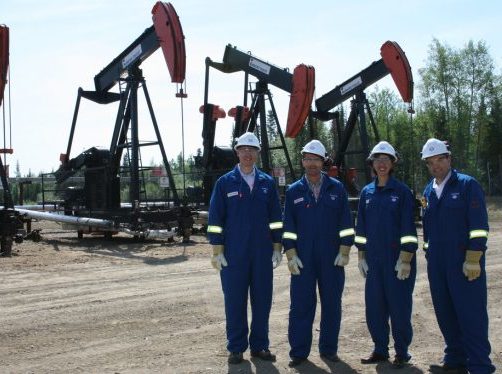 The Canadian economy has added 42 new jobs for each one it has lost in fossil fuels since 2014, and a 20-year industry phaseout would only reduce fossil employment by about 8,500 positions per year—as many as the country usually creates every 10 days—concludes economist Jim Stanford in an analysis published this week by Toronto-based Environmental Defence.

“Many fear that such a fossil fuel phaseout will cripple Canada’s economy and labour market,” the organization writes in a synopsis of the report. “Those with vested financial interests in the fossil fuel industry exploit these fears to oppose the climate actions and policies needed to best position Canada for a sustainable, carbon-neutral energy future.”

But “the actual number of fossil fuel jobs and the number of communities reliant on the industry is small enough that a just and equitable transition plan for workers is very feasible. Contrary to the claims of petroleum industry lobbyists and government-funded ‘war rooms’, the fossil fuel sector is a modest source of employment in Canada, directly accounting for less than 1% of all jobs in Canada.”

“It is now undeniable: fossil fuels will disappear from most uses in the foreseeable future,” adds Stanford, the former Canadian Auto Workers and Unifor economist who now heads the Vancouver-based Centre for Future Work, in an opinion piece this week for the Globe and Mail. “And fossil fuel industries will never again be an engine of economic growth and job creation in Canada.”

In the 12 months ending last September, the fossil industry lost 17,500 jobs, due to a combination of cratering oil prices and a pandemic-induced recession. Payroll employment in seven fossil fuel sub-sectors fell by 33,000, or 17%, between 2014 and 2019, the report states. Over that time span, other sectors have created 42 jobs for each one lost in the fossil industries, showing that “normal churn in the job market swamps changes in fossil fuel jobs”.

But “unlike other sectors,” Stanford says, “few of those lost fossil fuel jobs will ever come back—even after pandemic restrictions are eased.”

In the study, Stanford concludes that the “relative importance” of fossil fuel employment has been declining since 2014 “at a pace consistent with its complete phaseout over two decades,” Environmental Defence writes in a release. But despite the continuing decline of an industry that stubbornly insists on spinning its own financial prospects as synonymous with the economic health of the country as a whole, Canada’s overall labour market remained steady until the pandemic hit.

“Historical and international experience confirms that fossil fuel jobs can be phased out over time, while still maintaining vibrant job markets and secure livelihoods for workers,” Stanford said.

• Indicates no link between fossil employment and the performance of Canada’s wider labour market;

• Concludes that the fossil industry creates just job per C$1 million invested, compared to an economy-wide average of 8.6 jobs;

• Identifies just 18 out of Canada’s 152 communities—12 in Alberta, three in Saskatchewan, one (Lloydminster) straddling the two provinces, and two in British Columbia—where the fossil industry accounts for 5% or more of total employment;

“Industry players and their allies in government like to inflate the importance of fossil fuel sectors by adding exaggerated estimates of ‘spin-off’ jobs that depend indirectly on fossil fuel production,” the Environmental Defence synopsis states. But “many indirect economic activities and the jobs that come with them are not dependent on the fossil fuel sector itself, but rather economic activity generally. Many of these economic benefits can be filled in by other industries, especially if the transition is gradual over a two-decade period.”

The 18 most vulnerable communities—beginning with Wood Buffalo, Alberta and Estevan, Saskatchewan, both with more than 20% of their employment coming from the fossil sector—“should be provided with targeted, concrete programs to support diversification and alternative job creation,” the organization adds. At the same time, those transitions “will be easier in cities because of these workers’ more transferable skills and the greater availability of alternative job opportunities.”

“This research makes it clear that governments’ hesitancy to move on fossil fuel phaseout isn’t justified by economic factors,” said Dale Marshall, Environmental Defence’s national climate program manager. “It’s not fair to workers in the oil and gas sector to keep propping up an industry that must inevitably decline, and is already cutting jobs and eroding working conditions. Governments must start implementing this transition now.”

The report lays out a 10-point agenda for a steady, just transition: committing now to a long-term fossil phaseout; staging the transition over time; facilitating labour mobility within the industry; encouraging voluntary exit; supporting skills training; protecting incomes for affected workers; giving voice to fossil workers; making job creation a priority through “macro-economic management”; supporting regional diversification; and investing in cleaning up the epic inventory of abandoned and orphan oil and gas wells the industry has left behind.

On the contrary, “most existing fossil fuel workers will not need to switch to another job at all—so long as the phaseout of fossil fuel production is announced and planned well in advance, and closures are staged at sensible increments. The experience of other jurisdictions confirms that under these conditions, most affected workers simply retire when their normal working lives are near an end. Many others will gladly take up alternative job prospects in the intervening years, especially if supported by generous retraining and relocation incentives, and in the context of a vibrant economy.”

Reformed trade rules can help to save the climate