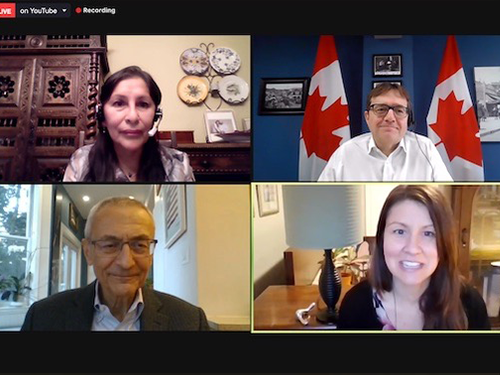 An aggressive program of executive actions and green investments, a White House staffed with “climate champions”, and a concerted effort to rebuild the U.S. government’s scientific capacity and morale will all begin to take shape today with the inauguration of President Joe Biden, former White House counsellor John Podesta said Tuesday afternoon, during a webinar hosted by Toronto-based GreenPAC.

“I think it will be a moment of stark contrast from one administration to another, maybe more contrast than we’ve ever seen in modern history,” said Podesta, founder and board chair of the Center for American Progress.

“There couldn’t be a bigger sea change from a policy perspective,” Podesta added, with Biden and Vice President Kamala Harris recognizing the intersections between the COVID-19 pandemic, the resulting economic crash, the climate emergency, and the crisis of racial injustice that underlies them all. On the campaign trail, Biden and Harris both “put forth very bold ideas about how to get the virus under control, get the economy restarted, but also how to attack this existential threat we all face in the global community from climate change.”

With today’s change in leadership, “the United States is back in the climate game, and will be a partner and a leader as we go forward,” he told an estimated 700 webinar participants. But while Democrats were looking ahead to a “moment of celebration” today, the tough work of bringing together a deeply divided country “will come more through action than through words,” beginning with a series of executive actions to make good on Biden’s promise of an effective response to the multiple, overlapping crises facing the U.S. and the world.

Canadian Environment and Climate Minister Jonathan Wilkinson pointed to a “welcome dose of climate optimism” in the run-up to today’s inauguration, with climate emerging as a “central pillar” of Biden’s economic growth plan and a “team of very thoughtful climate experts” set to deliver an “all-of-government effort” to respond to the climate crisis. He said Canada looks forward to “forging new opportunities for bilateral collaboration” that “accelerate climate action” by both countries.

“No doubt the incoming administration will be looking for strong allies” on climate, he added, “and they will find none more determined than right here in Canada.”

But speaking less than 24 hours before Biden was widely expected to cancel the presidential permit for the Keystone XL pipeline, Wilkinson wasn’t prepared to step away from the Trudeau government’s long-standing support for the climate-busting megaproject.

“Canadian energy opportunities with the United States are bigger than any one project,” he said, during the Q&A at the end of the webinar. But “it’s important not just for Canada, but for the U.S. to think about how the continued use of fossil fuels for combustion fits in the context of a broader climate plan.” Neither country will shift to an all-electric vehicle fleet in the next two years, and during a decades-long transition period, “Canada is of the view that it needs to extract value from the resources it has,” partly to invest that revenue in the transition out of the fossil economy.

In an interview afterwards, session moderator Sen. Rosa Galvez (ISG-Quebec) said the decision on Keystone will happen, whether or not the federal government changes its official line.

Wilkinson’s response to the question “was the political answer he had to give,” she told The Energy Mix. But “they don’t have to take a position because the market situation and the geopolitics will take care of it.” For Calgary-based pipeliner TC Energy, she added, Biden’s expected executive order coupled with low oil prices and shifting demand will call for a “new economic evaluation”, in the same way that Teck Resources eventually made its own decision to pull the plug on its proposed tar sands/oil sands megaproject almost a year ago.

“At that point, the company did its own analysis and realized the projections it had done were no longer valid,” she recalled. “These things are going to happen. When the price of a barrel of oil is still very low, the geopolitics have changed, and new markets in China and India are embracing clean energy, is there still a need for our petroleum?”

For Canada, “there will have to be a new economic evaluation of the situation given this change in leadership in the U.S., which is our first client for oil,” to assess whether “this project and other pipeline projects still have a future.”

Podesta and Wilkinson pointed to “significant alignment” between Biden’s climate plans and the Trudeau government’s climate agenda in areas like methane and hydrofluorocarbon controls, clean electricity, the automobile sector, species at risk, and protected areas. Wilkinson said a sharper focus on climate on the part of investors and the general public gave him reason to be optimistic about the pace of change, suggesting the two countries stand at a tipping point in the energy and economic transition that has been a long time coming.

“I feel like we’ve been pushing this boulder up the hill for many, many years and we’ve finally got to the top,” he said. Now, the transition can gain momentum, helped along by Biden’s arrival in the White House.

Podesta cited Biden’s pledge to achieve 100% clean electricity across the U.S. by 2035 as an “audacious goal and one that’s achievable”, noting that 40% of the investment is to be earmarked for front-line communities that have been left behind by the fossil economy. They’re the communities of colour “that have borne the brunt of pollution from fossil fuels and industrial pollution and see the highest rates of asthma, the highest rates of health care disparities across the country.”

With that focused approach, the new administration will be “giving people the sense that there is opportunity for everyone in this clean energy, more sustainable economy,” he said. “It is in fact a just transition towards innovation, business development, and the work that needs to be done to build out a more sustainable future, for both the country and the world.”

Both panelists touched on the insurrectionist violence at the U.S. Capitol two weeks ago. For all the “shock and revulsion” Canadians felt at what was happening to the “democratic institutions of our closest friend and ally”, Wilkinson cautioned against assuming Canada is immune to the same destructive forces.

“If you think about the support base that propelled Donald Trump to office,” he said, “at least part of it relates to the grievances of many people who felt in some measure that they were not being heard, that they were being left behind.” Canada has a “nexus that we need to bridge between energy and the environment,” where “we have part of our country that is very much hydrocarbon-dependent and people are feeling threatened. We need to be thoughtful about how we respond to that,” beginning with politicians of all stripes striving “to be inclusive and respond as much as possible to those concerns”.