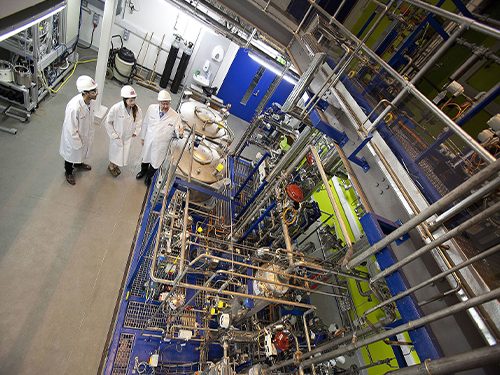 While direct carbon removal (DCR) technologies like afforestation and direct air carbon capture are showing up in climate plans across the corporate world, it will be sharp emissions reductions, not DCR, that actually will keep a 1.5˚C climate target in view, Greenpeace UK warns in a new report.

In the wake of the 1.5˚C pathways report released in 2018 by the Intergovernmental Panel on Climate Change (IPCC), many companies have signalled their intent to reduce their emissions to net-zero, Greenpeace writes. More than 1,100 businesses from 60 countries have so far committed to the United Nations’ Science Based Targets Initiative (SBTi), and within that group, 377 companies representing more than US$3.6 trillion in market capitalization have signed on to the more rigorous demands of the UN’s Business Ambition for 1.5˚C pledge—including heavyweights like Adobe, Bayer, Coca-Cola, Facebook, Ford, General Mills, Microsoft, and Unilever.

To help inform shareholders and investors who want to understand and assess the actual actions that have been pledged in this mountain of climate plans, Greenpeace UK developed an extensive briefing on a technology that features prominently across them: carbon dioxide removal (CDR). The briefing concludes that CDR must not become a “major plank” in climate mitigation efforts.

The hard limits of CDR and the considerable uncertainties surrounding its core technologies mean that even under best case scenarios, it won’t remove more than 10,000 megatonnes of carbon per year form the atmosphere, and its impact could be as low as 1,000 Mt. That won’t make much of a dent in annual global emissions, which stood at about 40,000 Mt in 2018.

What must happen instead, explains Greenpeace, is a reduction of energy demand. The IPCC’s work on the trade-offs between the emission reductions happening now and the level of carbon removal promised by planned CDR investment shows an equation that simply doesn’t add up.

If, however, their focus can be limited to the relatively “small proportion” of global emissions that come from heavy industry, freight, and aviation that is “likely to be unavoidable,” CDR initiatives such as afforestation/reforestation (AR, otherwise known as tree planting) or “technological approaches like bioenergy with carbon capture and storage (BECCS) or direct air carbon capture with storage (DACCS)” could be effective.

Critical to keeping average global warming below 1.5˚C, however, will be determining the “appropriate role of CDR in a world that achieves the Paris goals.” According to the Greenpeace briefing, the net-zero plans released by companies to date “vary widely in how much they rely on CDR, in terms of scale, purpose, and mechanism.”

Some of them “aim to avoid or minimize the use of CDR” and instead set out to reduce or prevent emissions through electrified vehicle fleets (AstraZeneca), drawing from renewable energy sources (Unilever), and developing “100% zero-emissions” products (Ford).

At the opposite end of the spectrum, some companies are ignoring even easy-to-abate emissions, relying instead on CDR to offset some of them—including Atlanta-based power companies Southern (earmarking CDR for 10% of emissions) and Duke (5%).

A few heavy emitters, though, have vowed to use CDR only as a last resort. The shipping company Maersk “has committed to net-zero operations by 2050 without offsets, including having net-zero vessels on the water by 2030”. Steel producer ThyssenKrupp “aims to be directly carbon neutral in its operations by 2050”, and Heidelberg Cement, while not committing to a company-wide net-zero target, “plans to offer a CO2-neutral concrete by 2050, not relying on offsets.”

But the aviation industry, says Greenpeace, is leaning heavily on offsets. “For American Airlines, CDR will be used to offset emissions equivalent to about 50% of the present total; for International Airlines Group, it is over 95%.”

But companies that are bank on CDR are doing so despite the uncertainty, and against warnings from IPCC that relying on the technology could put the Paris targets in serious jeopardy.

“The uncertainties are not whether mechanisms to remove CO2 ‘work’: they all work in a laboratory at least,” explains Greenpeace. “Rather, it is whether they can be delivered at scale, with sufficient funding and regulation, to store CO2 over the long term without unacceptable social and environmental impacts.” The answers to these questions seem to be a series of emphatic negatives.

While AR and BECCS often play well with the public—and so are equivalently popular with the corporate sector—both require a great deal of land, with the consequent risks to food supply and biodiversity.

Another critical difficulty with AR, in particular, is the complexity in the way carbon dioxide reductions could be measured and accounted for, explains Greenpeace. The amount of CO2 that can be removed depends on “the stability of the new forest” and its vulnerability to climate change; on its “species content,” as monoculture plantations are no substitute for natural biodiversity; and on the “previous land use it replaces.” On that last qualifier, Greenpeace adds that “forestry projects in the Global South have often been highly controversial,” raising critical questions about human rights.

For BECCS to be effective enough to remove 12,000 Mt per year of CO2—which it would have to do to achieve the median by 2100 in the IPCC’s 1.5˚C pathways with low overshoot—it would require a land area “equivalent to one to two times the size of India, or 25 to 46% of total world crop-growing area.”

All of this for a maximum sustainable level of CO2 removal courtesy of merely 500 to 3,600 Mt annually for AR and 500 to 5,000 Mt annually for BECCS, according to IPCC calculations. And since these CDR technologies compete for land, their potential “cannot simply be added to each other,” Greenpeace adds.

And yet, those constraints don’t seem to be a deal-breaker for many companies—even if the math is absurd. Italian fossil Eni and the International Airlines Group have publicly stated they will be “using forests to offset 30 Mt per year of CO2 by 2050,” but if just these two companies enacted their stated AR plans, they would consume up to 12% of the land available for the purpose, Greenpeace calculates.

Along similar lines, colossal fossil Royal Dutch Shell is proposing to replant 50 million hectares of forest to offset its emissions. That would use up 10% of the land world-wide that could be made available for reforestation without any impact on food or biodiversity.

As for Direct Air Capture—a “silver bullet” darling of the media, and much touted by fossils—Greenpeace observes that “capturing three-quarters of present CO2 emissions would require half of present global electricity generation, and heat equivalent to half of final energy consumption.”

Given the largely unsustainable—and vastly unjust—commitments of land and energy at stake in CDR, whatever deployment does actually take place will require rigid governance, Greenpeace says. Any claims of net removals will need to be “accurately accounted for, including reflecting prior land use and operational emissions.” Strict regulation will also be required to protect food production and biodiversity, as well as the rights of Indigenous peoples—particularly those with territories in the world’s forested areas. And on top of that, there is the transportation and storage side: “CO2 transport and processing for CCS must be monitored and regulated; geological and biological storage sites must be monitored for generations into the future.”

And then there is the global picture.

“Across all of this, international institutions must be created to deliver incentives, funding, and penalties,” Greenpeace notes. “One of the largest uncertainties in the scalability of CDR is thus the extensive institutions that would be required, at a global level, and these would have to remain effective over the very long term.” This “crucial dimension of feasibility” is glaringly absent in all current models for large-scale CDR use.

All of which means the very necessity for large-scale reliance on CDR would be proof-positive of a profound failure in policy—and in ethics, Greenpeace says, evidence that countries had missed all four emission reduction pathways in the 2018 IPCC report. Greenpeace goes into detail on each of those pathways.

If the business world wants to avoid a heavy dependence on unsustainable CDR approaches, it must “move to more sustainable economic patterns and behaviours,” Greenpeace says, with a sector-based approach to identifying companies that could “reasonably rely on CDR” to meet their net-zero targets.

“It would make little sense to use limited CDR potential to offset emissions that are relatively easy to abate directly,” like electricity generation. With the lion’s share reserved for hard-to-abate sectors like heavy industry and aviation, both the IPCC and the International Energy Agency recommend that heavy industry take precedence over aviation.

To apply those broad observations to corporate climate plans, Greenpeace urges shareholders and investors to demand clarity on the proportion of a company’s target is to be achieved by CDR rather than direct emissions reductions. Stakeholders should also push for confirmation that CDR is being pursued only after all possible innovation has been exhausted, and for clear proof that outstanding emissions are truly unavoidable.

Any investors looking for true 1.5˚C compatibility will also want to be alert for double dipping, checking to see if any CDR “relied on or invested in” is included in other companies’ or countries’ climate targets. That’s a particular risk for any CDR that is not directly linked to a company’s own supply chain.