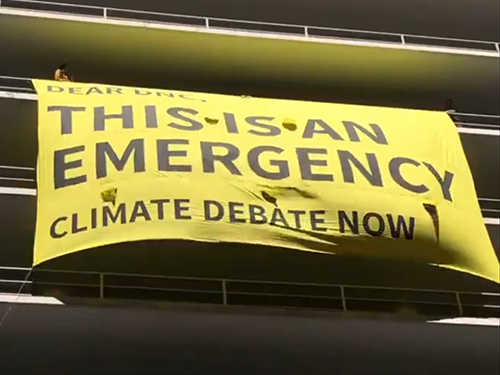 Amid a flurry of reporting on the policy and regulatory chainsaw that Donald Trump took to environmental and climate protections during his term of office, an analysis by Grist points to the rise of an energized, empowered global climate movement as an unintended consequence of the white supremacist wannabe golf pro’s four-year reign.

When Trump took office four years ago today, “those worried about the quickening pace of climate change had every right to be terrified,” write reporters Shannon Osaka and Kate Yoder. “Trump, however, will leave another legacy behind when he departs the White House. In the past four years, climate activism has catapulted into the mainstream.”

“Not that all of this activism was simply a backlash against Trump,” Grist notes. “Raging wildfires, record-breaking hurricane seasons, and scorching heat waves have also vaulted climate change into the public’s consciousness.”

But for better and for worse, Osaka and Yoder says it’s “hard to imagine” the community moving so far, so fast without Trump as a catalyst.

“When a political system is in place that is not open to people to push for change from within the system, they go outside of it,” University of Maryland sociologist Dana Fisher told Grist. “They march in the street, they yell in the street, they do sit-ins. It makes a lot of sense when you have an administration that doesn’t even acknowledge that climate change is real.”

Grist points to a generation of youth organizers who “got their first taste of politics” at the 2017 Women’s March on Washington or the March for Our Lives that followed the high school gun massacre in Parkland, Florida, then shifted their attention to the climate crisis and climate protest.

“They were the first children of ‘the resistance,’” Fisher said. “They came out originally around other issues but then started to see the importance of climate change.”

University of Denver sociologist Hava Gordon said young organizers like Thunberg took to the streets when they became convinced the political system was failing them, and refused to “wait their turn” to have a say. Then they inspired millions more to do the same. “Maybe if it was called ‘Father Earth’ you’d actually give a shit!” said one protest sign.

Grist has more on the different strands of protest and resistance that have sprung up since early 2017.

“There is some concern that, with a friendly face in the White House, some of the activism that has marked the past four years will begin to trickle away. It’s hard to imagine hundreds of thousands of people turning out for a March for Science during a Biden presidency, as they did during Trump’s.”

But “Trump’s strange, turbulent, and destructive years in office have given the climate movement something that it didn’t have before: a unified foundation on which to build, and a message that could resonate well beyond those concerned about ‘the planet’ in the abstract.”

Which means a more narrowly-focused environmental movement may be on a permanent path to reaching communities outside the “bubble” of climate concern. “If the movement can show that as a fast-food worker, you should be concerned about climate change and all the things that propel it,” Gordon told Grist, “that’s a huge victory.”