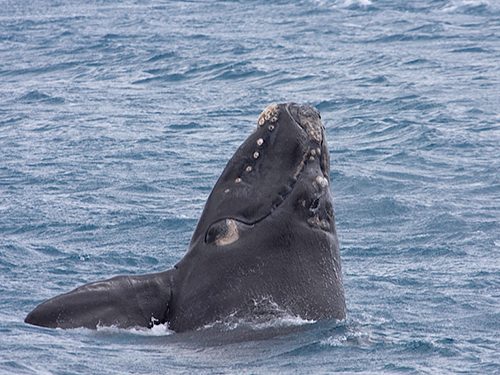 The federal government is putting its own climate targets out of reach, triggering higher carbon dioxide and methane emissions, putting endangered North Atlantic right whales at further risk, and undercutting the new impact assessment process it adopted less than two years ago, according to environmental groups reacting to the approval of three new fossil exploration projects off the coast of Newfoundland and Labrador earlier this week.

“In approving projects like this, the federal government likes to say the project-specific emissions are insignificant,” said Gretchen Fitzgerald, Halifax-based national program director with the Sierra Club Canada Foundation (SCCF). But “the reason for exploratory drilling is to get to production drilling, and this approval is a precursor for projects that are designed to result in decades-long investments in fossil fuels, which is inconsistent with the need to taper off production.”

“Exploration drilling in this area will affect ecologically or biologically significant areas, marine refuges, and even areas closed to fisheries,” said Mark Brooks, WWF-Canada’s senior specialist, sustainable resource development. And “despite the federal government’s declaration of a climate emergency and its commitment to reducing greenhouse gases, the assessments lacked analysis of the climate impacts of these operations and subsequent production drilling operations.”

“Expanding the offshore oil industry would make it virtually impossible for the province, or Canada, to meet its climate commitments,” said Julia Levin, climate and energy program manager at Environmental Defence. “The approval of three offshore exploration drilling projects highlights a lack of a framework for aligning energy decisions with what must be done to tackle the climate crisis.”

“These projects will create good jobs,” declared Natural Resource Minister Seamus O’Regan, whose St. John’s constituency is some 350 to 375 kilometres from the drill sites, in a release issued by the Impact Assessment Agency of Canada (IAAC). “They’ll also meet the highest standard of environmental protection. This is good news for our Offshore.”

The three approvals, issued to BHP Petroleum (New Ventures) Corporation, Equinor Canada Ltd., and Chevron Canada Ltd. by Environment and Climate Minister Jonathan Wilkinson, “will allow the proponents to determine the presence, nature, and quantities of the potential hydrocarbon resources within their exploration licences,” IAAC said. “The decision on the projects follows thorough environmental assessments, which concluded they are not likely to cause significant adverse environmental effects when mitigation measures are taken into account.”

Those project conditions cover fish and their habitats, migratory birds, species at risk, and resource use by Indigenous peoples.

“Environmental assessments which are based on science and meaningful consultations with Indigenous peoples and the public are key to responsible resource development,” Wilkinson said. “These resource projects will provide economic opportunities for many Canadians, and the legally-binding conditions imposed throughout the life of the projects will protect the environment for generations to come.”

None of which reflects the estimated 52 million barrels of oil and 200 trillion cubic feet of fossil gas in the Newfoundland offshore, according to a 2019 assessment cited by Fitzgerald, equating to 33.38 billion tonnes of carbon dioxide equivalent (CO2e)—the same as 43.44 years of emissions from the entire Canadian economy, or the annual tailpipe emissions from more than seven billion cars.

“Canada’s plans to expand the oil and gas industry off Newfoundland and Labrador will ensure the province does not meet its climate targets,” she told The Mix. If the province’s fossil reserves were all extracted, she added, they would use up 14% of the 2019 global carbon budget consistent with 1.5°C average global warming.

Moreover, “there is no realistic plan to deal with a major spill out there, and some of the leases overlap with what is meant to be a marine refuge, and will be prefaced by seismic blasting that harms marine life, including endangered whales,” Fitzgerald added in an email. “So these approvals are reckless from an ocean protection and biodiversity point of view, as well.”

The global population of North Atlantic right whales is down to only 356, groups say. They contend the federal assessments also failed to adequately assess the potential cumulative impacts of all the region’s oil and gas drilling operations, including possible seismic airgun surveys, increased vessel traffic, fishing activities, and climate change impacts. [The link for seismic airgun surveys points to a video that runs less than two minutes. But turn down the sound before you play it.—Ed.]

Coming on the heels of a C$41.5-million subsidy last month to try to salvage Cenovus Energy’s West White Rose offshore drilling project, “these latest drilling approvals are part of a trend,” Brooks added. “The federal government appears to be doing whatever it can to prop up an increasingly unviable industry, including rushing through the Newfoundland-Labrador Offshore Exploratory Drilling Regional Assessment” despite a court challenge by WWF-Canada, SCCF, and Halifax’s Ecology Action Centre.

“These environmental assessments do not inspire confidence that drilling will be conducted safely with the lowest possible risk to human health, the marine environment, and the climate,” he said.