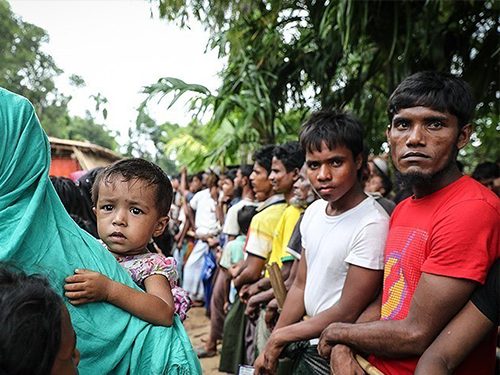 Bangladesh closed out 2020 by transporting at least 1,800 Rohingya refugees to the remote and flood-prone Bhasan Char island in the Bay of Bengal, bringing the total number of relocatees to 3,400.

A succession of news reports warned that members of the persecuted minority are being moved against their will to a spot that is deeply vulnerable to the impacts of climate change.

“The government insisted that the persecuted refugees want to start new lives on Bhasan Char, where 1,600 others arrived earlier this month,” Al Jazeera wrote in late December. But while Foreign Minister AK Abdul Momen has called their destination a “beautiful resort”, human rights campaigners “expressed new doubts about the transfers, saying some Rohingya had found their shanty homes in the [mainland refugee camps] padlocked so they had no choice but to go.”

Bangladesh eventually hopes to relocate 100,000 people “in a move to decongest the refugee camps which shelter approximately one million Rohingya,” the news story adds. The refugees have been in the camps in Bangladesh since 2017, after being targeted by deadly violence by the Myanmar military in what the United Nations considers a possible case of genocide.

Al Jazeera’s Tanvir Chowdhury reported that international journalists were barred from the island, but had a chance to talk with some of the refugees in the presence of government officials. “Most of them said they volunteered,” he said. “They’re going there on their own will with their families because they are tired of the congested life and don’t see any future of repatriation. They said everything looks uncertain so they are willing to try a new life on the island.”

But “the UN says it has not been allowed to carry out a technical and safety assessment of Bhasan Char and was not involved in the transfer of refugees there,” Al Jazeera stated. “Refugees and humanitarian workers say some of the Rohingya were coerced into going to the island, which emerged from the sea only 20 years ago” and is at risk of cyclones and flooding.

Earlier last month, Time Magazine cited allegations that families “were being compelled or even financially enticed” to move to an island that has never been inhabited before, located three hours from the mainland by boat. While the government promised no one would be forced to relocate, Washington, DC-based Refugees International called the plan “short-sighted and inhumane”, particularly with the region in the midst of its annual cyclone season.

“The move is nothing short of a dangerous mass detention of the Rohingya people,” the group added.

Deutsche Welle reported as far back as 2019 that the refugees were at risk of being relocated against their will.