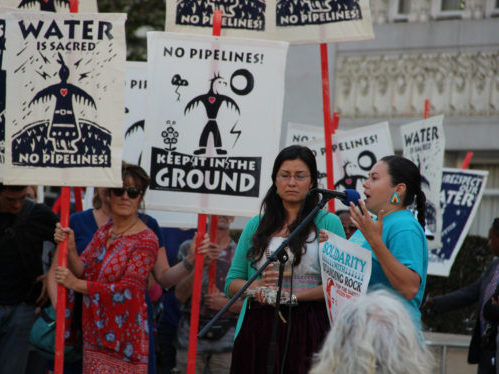 Eight of the protesters were arrested, the Indigenous Environmental Network (IEN) reports in a release.

“By mid-morning, a couple of hundred people had gathered near Palisade in Aitkin County, where the controversial pipeline Enbridge Energy is building is expected to cross under the Mississippi River,” Minnesota Public Radio writes. “The group later travelled to just south of Hill City, where they blocked traffic on U.S. Highway 169,” where IEN says the Calgary-based pipeline is “actively boring” on a path to the Mississippi and Willow Rivers.

“It certainly feels really beautiful to be out here today,” said tribal attorney Tara Houska, founder of anti-Line 3 Giniw Collective. “There’s a lot of folks that came to bring their prayers and to stand for the rivers for our future generations against Big Oil.”

During the protests, “construction stopped as water protectors held space and documented irregularities in the pipe being put into the ground,” IEN recounts. “Nearly 30 police squad cars from multiple counties and the Department of Natural Resources were onsite.”

When police moved in, “one arresting officer in a Cass County uniform without a badge refused to put on a face mask and grinned at the crowd as he held a zip-tied water protector,” the organization adds. “Enbridge’s work sites and man camps have quickly become hot spots for COVID-19 in Aitkin County.”

The White Earth Nation, Red Lake Nation, and Honor the Earth filed an emergency injunction against the project December 24, but the IEN release says it still hasn’t been heard.

“We saw Minnesota’s police officers protecting a Canadian tar sands pipeline being built by mostly out-of-state workers, for sale on foreign markets,” Houska said. “We need good paying jobs up north that don’t require us to destroy our environment. Where is the investment in the north land? Where is the upholding of treaty rights? Where is [the administration of Gov. Tim Walz] on this pandemic pipeline?”

In a separate statement, the Network contrasts the often deferential treatment the Capitol Hill mob received last Wednesday with the persecution and violence that Indigenous and Black communities have faced for centuries.

“We were also not surprised to watch law enforcement accommodate these white insurrectionists to swarm the building,” IEN writes. “Rather, we saw it as a reminder that white anger is always justified, no matter the cause, and our policing system will not only side with white supremacy but will protect it. This is the blatant hypocrisy of America.”