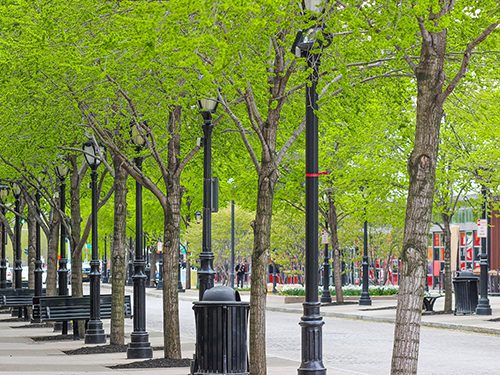 While Canada’s pledge to achieve a carbon price of C$170 by 2030 gives the country “a credible shot” at hitting its 2030 climate targets, the invisible hand of the marketplace won’t deliver a just transition to a lower-carbon economy without a green industrial policy to chart the course, Broadbent Institute policy fellow Brendan Haley argues in a recent blog post.

“Carbon pricing pushes towards reducing emissions, but it does not steer towards the most promising social and technological futures,” Haley writes. “There is a danger that economic decisions that pass a cost-benefit test with a carbon price (eg. a pipeline or new highway) are legitimized, when they could pull us towards dead ends that put net-zero emissions out of reach.”

By contrast, an industrial policy “gives policy-makers more tools and greater flexibility, which will be particularly useful during unanticipated shocks,” he adds. “Future shocks are inevitable, and when they come, we will need public sector institutions with a diversity of solutions readily available.”

Haley cites the success of programs like the United States’ 2011 Sunshot Initiative, which found the Department of Energy partnering with academics, national laboratories, and the private sector to support the technological and regulatory innovations that dropped the cost of utility-scale solar by 75%, thus making the technology available to millions of Americans.

A fundamental problem with doing nothing more than provide rebates via a carbon price, he adds, is that the quarterly rebate Ottawa is introducing will do little to “prevent people from worrying about how they will pay their monthly bills, especially if they have precarious incomes.” And rebates based on a calculated average won’t be enough for rural and low- to middle-income households that “can consume more because they live in inefficient and substandard housing—or worse, they avoid heating and cooling at healthy levels to make bills affordable.”

That means “the ultimate distributional consequences of carbon pricing not only depends upon rebate policies, but on the availability of carbon reducing services,” he argues. People need to live in energy-efficient homes and have access to quality public transit.

They must also be able to draw a direct line between the drive to a zero-emissions economy and a good, green job for anyone who wants one. And only a green industrial policy can guarantee such a just outcome, as “market forces or untargeted pricing and subsidy policies do not create jobs for the people and places that need them most.”

Noting that carbon pricing has already been weaponized, in Canada and abroad, by self-styled populists anxious to make political capital out of economic insecurity, Haley urges policy-makers to understand that having set a rigorous carbon price, they must now implement the green policies that will create a more just existence for all Canadians.

The crucial point that market fundamentalists like the Globe and Mail’s Andrew Coyne seem to miss, Haley writes, is that “a net-zero emissions economy requires doing things we have never done before.” Beyond figuring out how to deploy new technologies, it will mean extending existing ones like electric vehicles “at unprecedented scales,” all while navigating dauntingly complex issues like supply chains, and the demands of local economies shaped by particular regions and cultures.

“Industrial policy facilitates the sharing of more complex information about net-zero solutions, which will create a stronger reaction to any carbon price,” says Haley. And notwithstanding caricatures about “an all-knowing state setting rigid directions,” a modern industrial policy approach “understands that economies are beset by fundamental uncertainty, requiring governments to lead a process of discovery that taps information from markets and society.”

The other problem with relying solely on carbon pricing is that it won’t be enough on its own to provide the requisite accelerant to push zero-carbon solutions at the speed and scale the climate emergency requires. “Risk-adverse firms, acting independently” will not produce the system changes necessary to transform our economy, Haley writes. But the public sector has the know-how and the mandate to “monitor large systems” and create “new societal bargains”, as well as the “ability to take the risks associated with pushing technological and organizational frontiers.”

He adds that industrial policy is the vital mechanism that will render a necessarily broad, uniform carbon price acceptable to a province like Alberta, whose history of fossil development means a net-zero pathway that will be very different from hydropower-rich Quebec’s. “The more a green industrial policy can identify and support promising net-zero emission pathways that build from pre-existing regional assets, the better chance there is to build up supportive political coalitions for more climate action in the regions themselves.”

Developing a green industrial policy also means engaging civil society in creating a net-zero economy that is far more than just a matter of dollars and cents. “Good industrial policy considers how societal aspirations should influence the direction and character of economic development,” which means that “democratic deliberations about what type of society we want should be more comprehensive than the decision to change prices and let markets figure it out.”