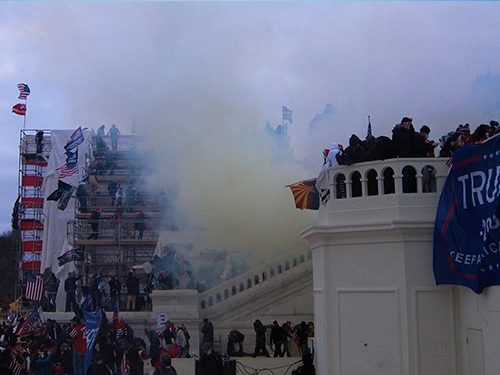 After white supremacists stormed and sacked the U.S. Capitol last Wednesday, some of the country’s most prolific climate deniers took to social media to amplify the misinformation and conspiracy theories Donald Trump had used to animate the mob. Indigenous and Black community campaigners, meanwhile, contrasted the preferential treatment many of the rioters received with the vastly more aggressive response to recent protests against fossil pipelines and racial injustice.

“Prominent climate science deniers moved rapidly to spread false and misleading conspiracy theories online during and after the attack on the U.S. Capitol by Trump supporters this week,” DeSmog U.S. reports. “Some climate deniers, including some with ties to the Heartland Institute and other organizations that have historically helped to create the false impression that there is sizeable scientific disagreement on climate change, also directly expressed support for the attackers and called for more violence.”

By contrast, “critics, including Black, Indigenous, and people of colour, say at least some of the scene was a stark contrast to what water protectors and treaty defenders have faced over the years, specifically at Standing Rock in 2016, where law enforcement repeatedly used tear gas, water cannons, and rubber bullets,” writes Indian Country Today. “More than 760 arrests were made in southern North Dakota during the height of protests in 2016 and 2017. At times, thousands of pipeline opponents gathered in the region to protest the US$3.8-billion project to move North Dakota oil to Illinois.”

“If these were Black, Brown, and Indigenous people they would have killed us already,” said Nick Tilsen, a member of the Oglala Lakota Nation and CEO of the NDN Collective. “Read between the lines, people.”

“Police literally worked harder to make sure a private company could build an oil pipeline on Native land, and to stop Black people from walking through their own neighbourhood asking politely not to be murdered, than to stop a few hundred white men from taking over the U.S. Capitol,” tweeted writer, actor, and producer Azie Dungey, a member of the Pamunkey Indian Tribe in Virginia.

“More violence was wrought against those protecting water at Standing Rock than against those storming the U.S. Capitol building,” replied @MeggieBaer.

“The relatively small number of arrests after a mob stormed the Capitol left many environmental activists shaken on Thursday—and wanting answers,” reports New York Times climate science writer John Schwartz. “Why did so many people who brought destruction into the home of American democracy simply walk away after doing so much damage, not just to a building but to the nation’s sense of itself?”

Community activist Rev. Lennox Yearwood Jr., president of the Hip Hop Caucus, told Schwartz it was “heartbreaking” to see rioters led out of the Capitol unscathed, after Black Lives Matter demonstrators went through a summer of arrests and beatings. News reports also had some Capitol Police officers posing for selfies with insurrectionists, moving crowd control barriers out of their way, or opening side doors to help them gain access to the Capitol building.

But “yesterday changed all that,” after “certain police allowed them to walk away” despite the mayhem, injuries, and deaths the crowd brought about. “There’s two worlds,” he said. “And we’ve got to fix that.”

But that didn’t appear to faze U.S. climate deniers like Marc Morano, communications director for the Committee for a Constructive Tomorrow (CFACT), a Washington, DC think tank that according to DeSmog has received funding from ExxonMobil and at least one conservative “dark” money organization.

“Many of my colleagues on the right are horrified by the Capitol under siege, but I am failing to muster outrage at the protesters,” tweeted Morano, from an account that lately seems more devoted to pandemic denial than climate denial. “This is way beyond Trump. It’s about lockdowns and tyrannical government,” and “striking fear in politicians is not a bad thing.”

What’s needed next, he added, “is mass protests to storm state Capitols and the [U.S. Centers for Disease Control and  Prevention] to end COVID lockdowns once and for all.

[Editor’s note: We’re quoting Morano from DeSmog after verifying the quotes on his Twitter account. But we are not publishing a link to the account that would even minutely drive up his social media traffic.]

After the U.S. National Association of Manufacturers condemned the violence, Morano’s account retweeted a reply claiming that NAM “has always been a bootlicking organization groveling at the booted feet of their governmental masters.”

The day after the riot, Heartland Institute policy advisor William M. Briggs claimed that “we fought the good fight and we lost—this battle,” DeSmog says. After some Republican politicians condemned the violence, after years of enabling and amplifying the seditious current occupant of the White House who had egged the mob on, Briggs called their response “the most disgusting display of cowardice and abject surrender we’re likely to see in our lifetimes.”

“DeSmog reviewed numerous accounts during and in the wake of the Capitol attack,” the publication adds. “Social media posts show that several other climate science deniers, like the UK-based columnist James Delingpole and Steve Milloy, publisher of the JunkScience.com website, joined many on the far right in circulating false information suggesting that it was not the visible pro-Trump participants who had been planning online for weeks to ‘occupy the Capitol,’ but instead members of their opposition—the loose, left-wing movement known as antifa—that actually invaded the building.”

But “on Thursday, the Washington Post reported there was ‘no substantive evidence’ that any antifa supporters had participated in the pro-Trump insurrection, adding that many claims of antifa involvement had cited a source that had, in fact, reported neo-Nazi participation.”

“As part of our work studying climate denial conversations online, we’ve observed climate deniers shift their focus over several months from climate change to QAnon greatest hits, such as COVID-19 conspiracies and anti-Black Lives Matter content and disinformation,” she wrote in August.

The broader strategy is to try to convince people there’s more than one “side” to a story about violent extremists, as far right provocateurs tried to do after the deadly white supremacist violence in Charlottesville, Virginia in 2017. “The goal isn’t necessarily to convince anyone of anything,” Ryan said. “The goal is to sow so much confusion that it’s actually hard for people to tell the truth from fiction.”