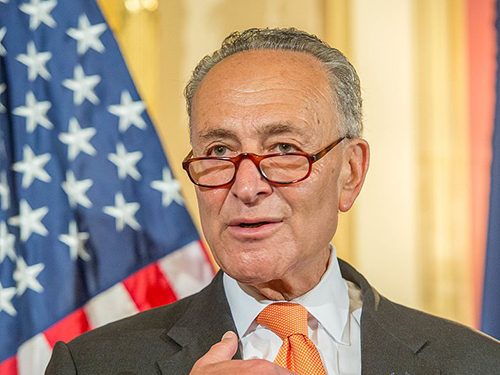 With Democrats poised to form a narrow majority in the U.S. Senate, following landmark run-off election wins this week by Senators-elect Raphael Warnock and Jon Ossoff of Georgia, the first two months of the Biden-Harris administration may be marked by a concerted push to roll back some of the worst deregulatory excesses of the Donald Trump years.

The sweet irony, if the Democrats decide to pursue the options available to them under the Congressional Review Act (CRA), is that they’ll be relying on a punishing legislative measure first brought into being by Georgia Republican Newt Gingrich in the 1990s, and deployed most avidly by Trump himself four years ago.

The Democrats’ use of the CRA may be just the first step in solidifying a set of climate and environmental priorities that received a powerful boost as the final results rolled in Tuesday night and Wednesday morning from voters in heavily Democratic DeKalb and Cobb Counties in Georgia. “Democratic control of Congress will make it easier for Biden to reverse some of…Trump’s rollbacks of environmental protections and to win confirmation for political appointees across the U.S. government who can shift policy toward a greener future,” the Washington Post writes. “But with razor-thin margins in both chambers of Congress, the incoming administration will still have to navigate the demands of climate activists who expect Biden to live up to his bold environmental promises and the reality of a Senate split 50-50, with ties broken by a Democratic vice president.”

“The most immediate change would be in the Senate’s leadership. Senator Chuck Schumer (D–NY) would replace Senator Mitch McConnell (R–KY) as majority leader, giving Democrats extensive power to decide legislative priorities and which bills advance to final votes,” adds Science Magazine. “Each of the Senate’s 20 permanent committees, which do most of the work of crafting legislation, would also get new leaders. The powerful Senate Appropriations Committee, which sets annual spending levels, is expected to be led by Senator Patrick Leahy (D–VT), a longtime advocate of environmental protection.”

Science says Sen. Thomas Carper (D-DE), a “vocal advocate of federal action on climate change and strong pollution laws” who has “helped write numerous legislative proposals to curb global warming”,  will likely chair the Senate Environment Committee. West Virginia Democrat Joe Manchin, a staunch supporter of his home-state coal industry, is widely expected to take the chair of Senate Energy and Natural Resources. “Manchin, who represents a state that has historically been highly reliant on coal mining, has been an outspoken supporter of developing technologies aimed at trapping carbon dioxide produced by fossil fuel burning before it enters the atmosphere,” Science writes.

But while those committee assignments sort out, the clock will be running on the CRA, which gives the U.S. Senate and House of Representatives 60 days at the beginning of a new legislative session to rescind any regulations adopted in the final 60 days of the previous Congress. The decisions must be adopted by both chambers, but they only need a simple majority—which means the CRA avoids the arcane Senate filibuster rules that require 60% support to adopt major legislation, explained Matt Kent, regulatory policy associate at Washington, DC-based Public Citizen.

The CRA “is built to do away with regulations,” Kent told The Energy Mix. “However, legally speaking, deregulatory actions are still regulations. So it’s possible for a Democratic Congress to use the CRA to undo some of the deregulatory actions that Trump put forward within the lookback period,” dating back roughly to the end of August.

Democrats have never liked the CRA, he added, and they’ve worried that action under the Act would preclude future regulations on “substantially the same” policy issues. But that legal doctrine is now getting a second look, based on the precedent set by Trump and the opportunity created by Warnock’s and Ossoff’s imminent arrival on Capitol Hill.

“When the Trump administration took over in 2017 and Republicans controlled Congress, they used the CRA to look back and repeal a slew of Obama-era regulations,” Kent recalled. “That was really the first use of the CRA in real, full action. There had only been one use of it before.”

And now, “we’ve seen the Trump administration, specifically the Securities Exchange Commission and the Department of Labor, offer rules on top of ones that have been repealed.” So while administrative law specialists are still debating the fine points, “our understanding at this point is that ‘substantially the same’ is a low bar to clear, which points in the direction that Democrats would be more likely to use the CRA in this upcoming term,” he said.

If Democrats do decide to make good use of the CRA, Kent said there will be no subject area “hotter” than energy and the environment, given Trump’s ceaseless deregulatory attacks and an accelerated push in the dying days of his administration. Key priorities could include:

• New Environmental Protection Agency (EPA) standards for ozone and particulate matter (PM2.5) that were rushed to completion, and fell short of the thresholds recommended by the scientific community and EPA scientists;

• Changes in the agency’s approach to cost-benefit analysis of regulations “that would be extremely beneficial to industry, and would apply to any rules put forward by the EPA in the future”;

• The so-called “secret science” rule, seen as an Orwellian attempt by EPA Administrator and former coal lobbyist Andrew Wheeler to prohibit the use of aggregated health data to regulate air pollution and other environmental contaminants, ostensibly for the sake of protecting the privacy of individual health records.

News coverage this week has also focused on a final rule that would loosen protections for streams and wetlands affected by pipelines, power lines, and other infrastructure, and eleventh-hour regulations that protect industries, primarily fossil companies, from prosecution or penalties under the U.S. Migratory Bird Treaty Act.

Ironically, while the Congressional Review Act might offer quick relief from some of the worst excesses of the Trump years (though not, unfortunately, from the traumatic excesses of January 6, 2021—Ed.), Kent said most Democrats aren’t happy about it.

“There’s been a lot of internal debate about whether to use it,” he told The Mix. “I think people are now moving toward using the tools in our toolbox to do what we need to do to get rid of Trump’s deregulatory legacy. But folks aren’t ruling out a pull-up-the-ladder approach, to use the CRA and then repeal it, or amend it so it’s not a factor. It’s still a very bad law, and a very poorly-written law, and it would be good to be rid of it once and for all.”

Even while CRA discussions are under way, and certainly after the 60-day review period ends, the far bigger challenge for Biden-Harris will be to navigate razor-thin majorities in both the House and the Senate to implement an ambitious platform that includes a US$2-trillion commitment to climate action and green recovery. As those discussions unfold, Axios calls it an “intriguing dynamic” that Manchin, one of the most conservative Senate Democrats and a declared opponent of the Green New Deal, will chair Energy and Natural Resources “at a time when activists and progressive senators want to use this super-rare White House-Senate-House trifecta to yield aggressive moves.”

The fallback assumption about Manchin is that he’ll line up behind a dying coal industry that for generations brought jobs and some degree of economic stability to the communities he represents. But whether the effective balance of power in the Senate rests with Manchin or with any other moderate from a fossil-dependent state, Kent said a successful legislative program always comes down to negotiations and priority-setting.

Given the breakaway potential in renewable energy and energy efficiency investment to create the jobs, improve public health, and build up local communities, “the ideal outcome here is essentially to shower West Virginia with such benefits that the investment helps them move on from the coal economy,” he said. “It’s going to happen anyway, so the argument would be to help them move into the next phase by becoming a central player in renewables. Of course, the devil is in the details, but that’s not over-optimistic. I think that’s the play.”