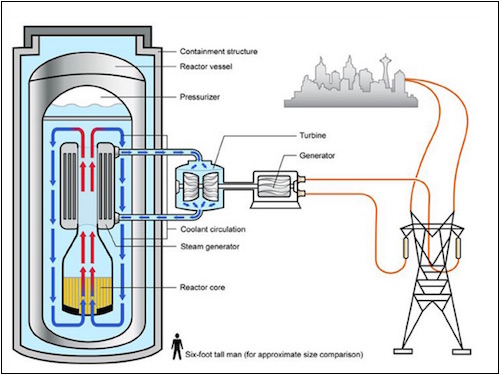 For many kids who grew up in the 1980s and 1990s, Star Trek was a big part of our childhoods. The series is filled with strange new worlds, futurist politics, and advanced technology that is almost indistinguishable from magic. Yet even as a child I knew the show was a work of science fiction. Warp speed, transporters, and phasers were all gadgets I could comprehend, but in my rational mind I knew they would never exist within my lifetime.

Unfortunately, recent announcements by Canada’s Natural Resources Minister Seamus O’Regan—a self-professed fan of science fiction—demonstrate that the government has yet to arrive at the same conclusion I did as a kid watching Star Trek.

On December 18, the Trudeau government launched Canada’s Small Modular Reactor (SMR) Action Plan, to great fanfare. This new action plan builds on the 2018 SMR Roadmap, which made the promise that, “SMRs are a re-scaling and repurposing of nuclear technology for wider markets. They represent a paradigm shift for nuclear reactor technology—analogous to the shift of steam engines from mineshafts into ships and vehicles, or the movement of computers from mainframe to desktop and then to laptop.”

This idea of a paradigm shift channels Star Trek-level aspirations, yet the new Action Plan is significantly more hesitant: “Small modular reactors (SMRs) could be a source of clean, safe and affordable energy, opening opportunities for a resilient, low-carbon future and capturing benefits for Canada and Canadians while supporting reconciliation with Indigenous peoples as essential enabling partners.”

In just two years, from the launch of the Roadmap to the announcement of the Action Plan, the government has gone from a paradigm shift to the possibility that SMRs could be a source of clean energy. It’s as though there is something else about SMRs that the government doesn’t want us to consider in more depth.

Before we go any further, what are SMRs, anyway? Well, it turns out that’s a very good question. In fact, the Globe and Mail notes that “SMR lacks a universally agreed definition, and the Canadian Nuclear Safety Commission regards it as a marketing rather than a technical term.” In other words, SMRs are a group of many different technologies, none of which have actually been proven or tested, with only one project proposed and no time frame for its realization. None of the technologies currently under consideration have solved any major issues with nuclear energy, including the problem of high-level radioactive waste management, however some are less likely to have meltdown-like events and cannot produce isotopes for creating weapons.

The Statement of Principles section of the Action Plan states that, “Markets around the globe are signalling a need for smaller, simpler, and cheaper nuclear energy.” However, there is simply no evidence to support this claim. In fact, the polar opposite is true, with many major governments and large corporations exiting the nuclear sector entirely. Meanwhile, German experts have stated that, “SMRs are always going to be more expensive than bigger reactors due to lower power output at constant fixed costs, as safety measures and staffing requirements do not vary greatly compared to conventional reactors.”

The British press is even more blunt about the prospects of a more ‘tactile’ nuclear future: “There is no commercial case for giant new reactors in any developed country. They cannot meet post-Chernobyl and post-Fukushima safety demands at viable cost and have been priced out of the global energy market. Precipitous falls in renewable costs over the last five years have rendered the technology effectively obsolete in the West.”

This doesn’t sound like a bold future to me.

In the text of the Action Plan, O’Regan states, “Quite simply: Canada is really good at [nuclear energy]. And Small Modular Reactors (SMRs) represent the next great opportunity for Canada—helping us to phase out coal and electrify carbon-intensive industries such as mining and petroleum extraction.”

This isn’t entirely off-base. The CANDU reactor has been a Canadian success story in the past despite its ties to the increasingly questionable SNC-Lavalin. But does nuclear power need to be a part of our energy future?

The theory is that SMRs will be cheaper and safer than conventional nuclear reactors. Again, German experts disagree on the cost front. In terms of levelized energy costs, says Nicolas Wendler of industry association Nuclear Technology Germany (KernD), SMRs will always be more expensive than big plants. Moreover, he says, “nuclear power plant owners have repeatedly rejected the idea that the nuclear exit be reversed, arguing the technology is no longer economically viable anyway.”

In the United States, some nuclear plants are being decommissioned early, while other projects are being cancelled at a huge financial loss. Why? They aren’t competitive. This does not even account for the fact that we have yet to successfully build even a single SMR. Yet, if we were to, how much would they cost? The record for delays and cost overruns in Canada is not positive, and nuclear facilities have an unusually poor record in this regard. After 1970, the average nuclear facility saw cost overruns exceed 241% (not including the added burden of construction delays).

This does not even begin to address the costs and hazards associated with cleaning up nuclear sites, such as expensive remediation projects now underway in the U.S. and the UK. Perhaps unsurprisingly, these failures and cost overruns sound a lot like the last major federal investment in the energy sector—the Trans Mountain pipeline fiasco.

There is no doubt Canada will need new energy sources for our clean energy transition to address the climate crisis. The Government of Canada claims, “At the same time, international experts are telling us that new nuclear energy, together with the full range of low-carbon technologies, are needed to combat global climate change and meet federal, provincial and territorial emissions targets for 2030 and 2050.”

However, international examples do not inspire confidence that nuclear needs to be a part of this solution. Germany is close to achieving half its energy supply from renewables excluding nuclear. In the UK, some estimates show that not including nuclear energy in the mix will save hundreds of millions of pounds and that the only justification for pursuing nuclear energy in the UK or France is to support a nuclear military strategy (which Canada does not have).

At least the UK is putting its money where its mouth is, with over half a billion pounds invested into nuclear, while Canada’s new SMR Action plan includes precisely $0 of investment, as opposed to our new federal hydrogen strategy, which received C$1.5 billion.

Why would we choose nuclear over other cheaper and readily available renewable technologies? It is true that there are still major flaws with renewables, but given that most SMRs are a decade away (at least), and the cost of solar has already dropped 89% in the last decade, it seems unlikely that SMRs—whenever they are ready—will be competitive.

One of the theoretical selling points is the deployment of SMRs in rural and remote communities to replace diesel. Yet many Indigenous and northern communities have expressed trepidation towards SMRs dotting their territory, and are building solar arrays instead. Another argument is that SMRs could be used for industrial facilities such as those in the mining sector, or the Alberta tar sands/oil sands (this was a terrible idea in the past, and it’s terrible idea now). However, others suggest SMRs are only capable of “ticking off the Financial and Consumer Services Commission’s checklist on how to spot a scam.”

Canada’s SMR Action Plan is nothing more than science fiction: idle dreams of an indefinite group of technologies which may be ready in a decade, with no financial support or investment by the government. In the meantime, renewable energy continues to leap ahead, mostly without any federal support.

One can only imagine how government investment, if effectively pursued, could push our renewable energy potential by the time the first SMRs are ready for deployment. Given these considerations, perhaps the reason this “Action Plan” is so empty is that the federal government is in fact aware of how little potential SMRs hold. Like nuclear fusion, maybe SMRs will always be just around the corner. In which case, why bother launching this plan at all? Let’s save our time and investment for renewable energy projects that have viability today, not somewhere down the road.

Burgess Langshaw-Power is a former policy analyst currently completing his PhD in Global Governance at the Balsillie School, University of Waterloo. His policy expertise includes energy technologies, regulatory approvals, climate change, and energy infrastructure. Views expressed here are his own and not necessarily those of his employer.