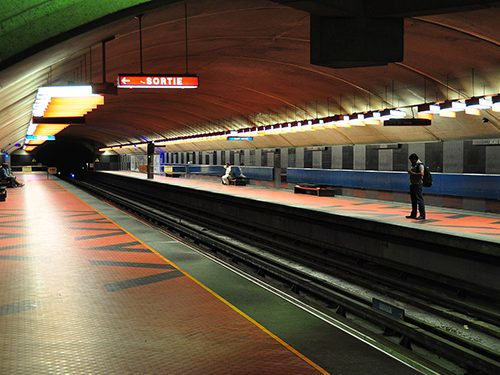 Montreal’s light rail network has announced a C$10-billion expansion into the city’s perpetually underserved east end, meaning that residents will be just a minutes-long trip away from downtown once the 23 new stations and 32 kilometres of track go into service in 2029.

The automated electric train system unveiled Tuesday by the Réseau express métropolitain (REM) “will be faster than driving and will certainly outpace buses” for many users, CBC reports. “Once completed, a rider will be able to travel from CÉGEP Marie-Victorin to downtown’s Place des Festivals in about 30 minutes. That’s estimated to be about 25 to 70% faster than by car.”

“The system will link to existing transit networks and carry a projected 133,000 riders a day by 2044,” the Globe and Mail adds, citing a presentation by the Caisse de dépôt et placement du Québec, the lead project manager and financier. “It will connect to several industrial parks such as the Port of Montreal and touch 27 million square feet of vacant land conducive to redevelopment.” Trains will run at two- to four minute intervals during peak hours.

The construction project will create 9,000 direct and indirect jobs per year, CBC says.

“We have a project today that is technically feasible, that is economically viable, and that we want to be profitable,” said Caisse President and CEO Charles Emond. “This is a sustainable investment that will contribute to Quebecers’ retirement plans and generate significant benefits for the economy, the environment, and communities.”

The new section will bring REM’s total capacity up to 49 stations and 99 kilometres of track, split into two separate networks. The first phase is set to open by the end of 2021, and construction on the REM de l’Est, or eastern network, is to begin in 2023.

The Globe and Mail casts the announcement as “another major bet” by the Caisse de dépôt “that public transportation infrastructure will deliver returns for its depositors in the years to come.” The decision to take on “a second major transit infrastructure project when it is still in the throes of the first will add to the pressure on the Caisse, which has a dual mandate of optimizing returns while contributing to Quebec’s economic development.”

But Emond, along with Quebec Premier François Legault and Montreal Mayor Valérie Plante, cast the project as an opportunity to “breathe new life and investment” into former industrial lands in the east end that have fallen into neglect, the Globe says. The story describes brownfield sites left over from petrochemical production that the city has begun decontaminating.

“All the big cities in the world try to draw inspiration from the Silicon Valley model in California. In our case, what we’ll try to build is a Silicon Valley North with four seasons in Montreal’s east end,” Legault told media. “For that to happen, we need a public transit project for the 21st century.”

Once the new stations open, “the eastern and northern branches of the REM will serve some of the city’s most densely populated, poorest neighbourhoods,” CBC says. The area was neglected when the city’s existing subway system, the Métro, first opened in 1967, and has received only limited service since.

“It will definitely support the economic and social development in that area,” said Plante.

CBC has a map of north-south and east-west light rail networks that will connect to downtown and the Métro.