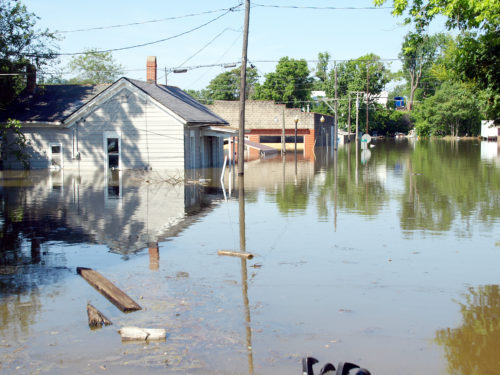 As flood risk grows in tandem with the climate crisis, absent or weak disclosure laws are putting the safety and financial well-being of millions of Americans at risk.

“About 15 million properties have significant risk of flooding, according to recent estimates that take into account climate-driven weather,” reports National Public Radio. “Studies in multiple states have found that most people living in harm’s way did not understand their home’s flood risk until after they purchased it.”

Poor and middle class Americans, many of whom “invest everything they have in their home,” are the hardest hit, and many have no savings to shelter them when rising waters take everything away.

“More than 80% of presidential disaster declarations between 1980 and 2017 were for events that included flooding,” writes NPR. Citing data from the Natural Resources Defense Council, the non-profit media organization notes that 21 states “do not require any information about flood risk to be disclosed to homebuyers.”

Among those states are Florida, Virginia, and Massachusetts, each acutely and increasingly vulnerable to rising seas and storm surges.

In 27 of the 29 states that do have disclosure laws on the books, sellers are only required to provide buyers with information about flood risks after they have received an offer.

“At that point, you’re really committed to a property,” said Carolyn Kousky, executive director of the Wharton Risk Management and Decision Processes Center at the University of Pennsylvania. “It becomes something that’s like, ‘Hey, is this enough to kill the deal and walk away?’”

Also in need of revision, Kousky added, is the way in which flood risk information is provided. “In the majority of states with flood disclosure requirements, homebuyers get a form with a simple check box saying whether the property is in an official flood plain—one of hundreds of pages of documents that the buyer must make sense of after they’ve made an offer,” NPR explains.

Flood maps are a whole other problem. The official ones “have hard lines between areas with high flood risk and areas with little or no flood risk, which can give the false impression that a home that is next to a flood plain is not at risk for flooding.” Yet data from the U.S. Federal Emergency Management Agency (FEMA) shows that nearly a third of flood damage “happens outside official flood plains,” writes NPR.

“It doesn’t mean you’re safe if you’re not in it,” said Kousky. “Right now, we don’t do a good job explaining that to people.”

Three years ago, Texas was successful in passing a law “that requires sellers to tell buyers whether a home is in a flood zone and whether they have flood insurance,” the news story adds. But similar efforts in other states have foundered on bipartisan fears that disclosures will drive down property values. In fact, writes NPR, “disclosing flood risk can cause property values to dip slightly”—in most studies, the loss in value is about 4%.

“There’s a side of you that doesn’t want to take the risk of devaluing any properties,” said Miyuki Hino, assistant professor of city and regional planning at the University of North Carolina, Chapel Hill. “And therefore [thinks], ‘Let’s just leave everything the way it is’.”