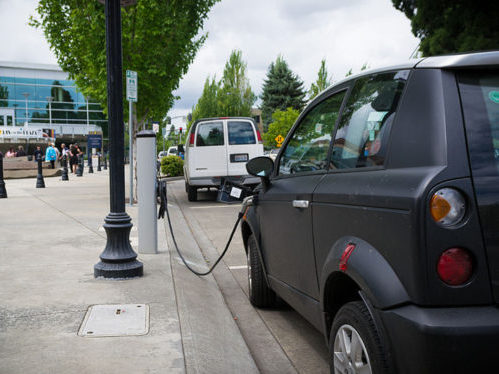 Policy-makers looking to expand electromobility in Canada need to understand that incumbents rooted in the old economy are powerful, self-interested, storytellers. And those who are opposed to the new player on the scene (oil) or uncertain about its impact (automotive) have lessons to learn about how to tell a tale that’s more sustainable—and no less profitable, writes post-doctoral fellow Nathan Lemphers.

“What makes some regions enthusiastic adopters of electricity-powered transportation and others confident in the continued demand for gasoline and diesel?” asks Lemphers, a post-doc at the Smart Prosperity Institute (SPI), in a recent position paper.

Examining trade publications issued between January 2014 and April 2020 by the oil, auto, and electricity sectors in Alberta, Ontario, and Quebec, respectively, he finds that it is stories that will bind—or divide—Canadians as the country moves toward electrification.

To determine the existing storylines for each region, Lemphers focused on specific media: the Canadian Association of Petroleum Producers’ Context magazine (for Alberta), the Automotive Parts Manufacturer’s Association’s Lead, Reach, and Connect magazine (Ontario), and member letters from the Association de l’industrie éléctrique du Québec, as well as its Lumière magazine (Quebec).

In Lead, Reach, and Connect, electromobility was thin in the pages. Out of 11 mentions of the technology between 2014 and 2020, nine offered legitimizing storylines that gave equal play to pollution reduction, enhanced competitiveness, and convenience. But a “lack of consistent focus” undermined its claims “and the perceived importance of the electromobility debate,” even though the association is widely perceived as a credible messenger.

In Context, the treatment of electromobility “was most notable by its absence,” with any and all passing mentions framed in the negative—specifically, that the technology was either not ready or not important. This “ineffective” storyline on electromobility has had strong resonance for audiences still seeking “business-as-usual expansion”—a resonance deepened by the credibility of one of its messengers, the International Energy Agency, Lemphers says.

Deploying the emergent methodology of multi-dimensional discourse analysis, which considers how humans, content, and context interact to determine storylines, Lemphers looks at why the adoption rate for electromobility varies so widely across regions, even as the technology “rapidly moves from an expensive niche experiment to an increasingly viable transportation option.”

For example, while “hydropower-dominated” Quebec has created a flourishing environment for electromobility, Ontario’s response has been tepid—an odd lack of uptake given that the province “boasts a major automotive manufacturing industry, which should position it to embrace the competitive advantage that comes with technological innovation.”

Alberta, meanwhile,  has declined to follow in the footsteps of its fuel-producing peer Norway and “bankroll expensive electromobility policies”.

The difference, writes Lemphers, owes to the storylines—narratives that “intentionally distill depictions of complex problems into simplified accounts”—that each region has used to promote or inhibit the shift.

Central to the success of any story, and particularly to the successful receipt of the urgent story of the need to “electrify everything,” writes Lemphers, is “the need for political actors to link the stories they use with powerful pre-existing and regionally specific stories to deepen the discursive resonance of pro-electromobility storylines.”

This, he adds, is particularly the case for Canada, “a highly decentralized federation, with distinct and sometimes divisive regional identities.”

Explaining the term discursive resonance as “a function of the strength of a storyline’s constituent parts,” including the believability of the claims, the centrality of the issue, and the credibility of the messenger, along with the “degree of alignment among these parts,” Lemphers notes that the concept will ring true to anyone who has ever had to listen to someone who does not believe in climate change. Issue centrality, in particular, “concerns the perceived importance of the debate, as it relates to broader contextual developments”—for example, unemployment in a community.

Finally—and critically in this age of “fake news” and social media—messenger credibility “relates to the perceived knowledge and trustworthiness of storyline messengers, which can vary across communities based on differing worldviews.”

Lemphers concludes that a storyline will have discursive resonance if the three key storyline elements (content, context, and actors) “are strong and there is alignment among them.” Understanding this concept will be critical to helping “incumbent regional economic actors”— oil in Alberta, automotives in Ontario, and electricity in Quebec—either to alter, or in the case of Quebec, to maintain “the stories they tell about electromobility to better capture the benefits from this potentially disruptive technology.”

So far, Lemphers says the three provinces exist on a spectrum, with Alberta, which has “long had an unfavourable EV policy environment and very few EVs,” at one end, and Quebec, which “has had consistent and comprehensive EV policies and a relatively high number of EVs,” on the other. In the middle is Ontario, currently possessed of a “moderate amount of EVs,” and—at least in the past—quite rich in “a number of important EV policies”, many of which have been repealed.

Understanding the broader context in which the story of electromobility is being heard is “crucial to assessing the impacts on sustainability pathways,” Lemphers writes, adding that all three provinces in his research “are currently undergoing significant regional change.” Those factors include “the flight of global capital” from the upstream oil sector in Alberta, and “increasing automation, digitization, and increased competition from other auto manufacturing regions in North America” in Ontario.

In Quebec, meanwhile, the electricity sector “is seeing heightened demand for its low-cost, emission-free energy both from within the province and from neighbouring jurisdictions.” The AIEQ has also found success in focusing on the enhanced competitiveness storyline. “Given the long-standing image of electricity as driver of provincial economic development, the competitiveness storyline is believable,” notes Lemphers. Credible messengers “in the form of senior leadership from AIEQ, Hydro-Québec, and the provincial government” have also helped the storyline resonate.

Get the rest of Nathan Lemphers’ storyline about storylines here.