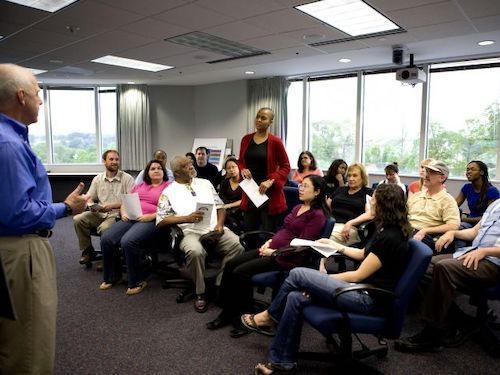 A factory worker from India, a sheep farmer from New Zealand, and a bus driver from the UK could end up working side by side on the best approaches to solving the climate crisis, if they’re among the 1,000 people chosen at random to take part in a first-ever global citizens’ assembly leading up to next year’s United Nations climate conference in Glasgow.

One organizer is calling the UN-sanctioned effort the “biggest experiment in global democracy ever attempted”.

The participants “will be selected at random to reflect the gender, race, age, and economic make-up of the global population,” iNews reports. “They will meet online next year to learn about climate change from international experts, before drawing up advice for world leaders.”

Along with the core event, which Reuters says will run for several months following a lottery in spring or early summer, organizers hope to involve millions of people around the world in local and national events.

The project website lays out a five-point plan: understanding the reality of the current global situation, prioritizing hopes for life in 2040, agreeing on actions that match the future citizens want, generating action plans, and launching into action during a “‘moment’ when the eyes of the world are on the citizen plans”.

“We will bring many new, probably previously unheard voices into the Global Assembly,” said organizing team member Claire Mellier. “Not all of them are going to agree on the situation we are in, or what we should do next. We will, however, support careful listening between people so that true respect and understanding emerges. And when this happens, we know that new possibilities come to light, that transform what we can do together.”

While local citizens’ assemblies have emerged as a popular tool to gauge public opinion on “tricky topics”, iNews says, the climate assembly will be the first of its kind at the global level. “Organizers are hoping its conclusions could spark a breakthrough in international climate talks, which have spent four years bogged down in finalizing the ‘rules’ for the Paris climate treaty.”

“For too long, the international debate on climate has been dominated by powerful minorities,” said public participation specialist Rich Wilson. “It’s time for that to end. The Global Citizens’ Assembly is the biggest experiment in global democracy ever attempted. An ambitious endeavour, equivalent to the crisis we face.”