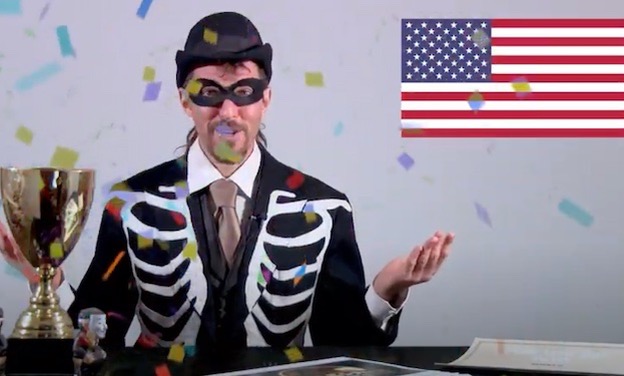 The United States won the highly-coveted Colossal Fossil of Five Years, as well as a second award for stinginess on climate finance, while Brazil came away with two awards and Australia with one, when Climate Action Network-International announced its modified Fossil of the Year awards on the eve of Saturday’s UN Climate Ambition Summit.

“Five years after the Paris Agreement, countries continue to outdo each other at being best in doing the worst to fight the climate crisis,” CAN writes in a release. “But some are always better than others (hint: surprise they haven’t been invited to the Paris Agreement Birthday Party).”

Climate Action Network normally issues a Fossil of the Day award each day of the annual United Nations climate conference, recognizing the country or institution that has done the most in the previous 24 hours to obstruct progress toward faster, deeper carbon cuts. At the end of each conference, the worst performer of the year receives the Colossal Fossil award. The annual award ceremony dates back to 1999, and has gained a degree of impact and influence with negotiators who would rather not see their countries mocked onsite or called out by media back home for their inaction on the climate crisis.

With this year’s UN conference, COP 26, postponed due to the COVID-19 pandemic, the awards were based on a survey of CAN’s 1,300 civil society members in 130 countries, conducted “through a fair and democratic voting process (that required no recounts),” the organization snarks.

In the end, the vote was the only one this year that the Trump administration won fair and square.

“Let’s be honest, the USA has never been the loudest cheerleader for climate action,” the award citation states. “In some ways, President Trump simply said the quiet parts aloud. ‘America First’ has always been the north star guiding the US’ official line in international climate talks, like when verbally bulldozing proposals for climate compensation and finance for Loss and Damage to vulnerable countries, arm-twisting poorer nations into accepting weak climate targets from rich countries, and flexing their diplomatic muscle to break or make deals, all the while with handshakes and smiles. Until….2016.”

For the four-year span that began while delegates were gathered in Marrakech for COP 22, “a Colossal Fossil of Five Years can never capture the depths of ineptitude and damage of the Trump years: from amplifying climate denialism, to dismantling domestic environmental policies, to undermining progress in multilateral spaces like the UN Framework Convention on Climate Change, the Intergovernmental Panel on Climate Change, the G20 and G7, and the Green Climate Fund.”

The Trump administration “has been particularly stingy on finance for climate action,” CAN adds, in the citation for a second Fossil award for not providing financing and support. “Withdrawing from the Paris Agreement was bad enough but the USA used its bully pulpit to obstruct finance to developing countries. By ceasing all finance to the Green Climate Fund (inspiring other countries like Australia) it deprived millions of people in poor countries critical resources to adapt to the climate crisis. Funding to the IPCC was also summarily halted, unsurprisingly some might say, by an anti-science administration.”

Brazil took two of the five Fossil awards, one for failing to protect people from climate impacts, the other for shrinking civil society space. “An alarming climate tipping point could happen much sooner than expected when the dense, green canopy of the Amazon rainforest turns into a dry open savannah, an irreversible process that is being hastened by increasing fires and logging,” CAN writes. “The policies of ‘Chainsaw’ Bolsonaro (President Jair Bolsonaro, aka “Capitão Motoserra”) have ensured that the ‘Cooler of the Planet’ is now a scarred, choking mess.”

And Brazil withstood tough competition from Russia in the Shrinking Civil Space category “for its escalating crackdown on civil society groups resisting its regressive policies and fighting for the rights of Indigenous communities,” CAN writes. “A leaked document shows Brazil’s military plans to control ‘100% of NGOs working in the Amazon’ and is set to advance policies to starve NGOs of funding. It is no wonder that Brazil ranks number three in the world for the murder of environmental defenders.”

Australia made it to the podium for its staunch refusal to honour the Paris Agreement commitment to work toward a 1.5°C limit on average global warming. “As the largest exporter of coal and gas, Australia’s federal government has done virtually nothing over the past five years to tackle the climate emergency,” CAN states. “The government’s woefully inadequate 2030 Paris Agreement target is in line with a catastrophic 3°C rise. And it has tried to cheat by using carryover credits from the Kyoto Protocol to meet around half of it,” although the country finally abandoned that particular sleight-of-hand last week.

But not before “the world watched swaths of Australia’s bush burn last summer, contributing to significant biodiversity loss and impacting the most vulnerable people,” CAN recalls. “Besides stinking up the planet, Australia appears to be reneging on a commitment to net-zero emissions made to Pacific Island neighbours in October 2019. How does Australia face its Pacific Island neighbours, many of whom will be displaced in the next two to three decades unless we scale up efforts to limit global warming to 1.5°C?”