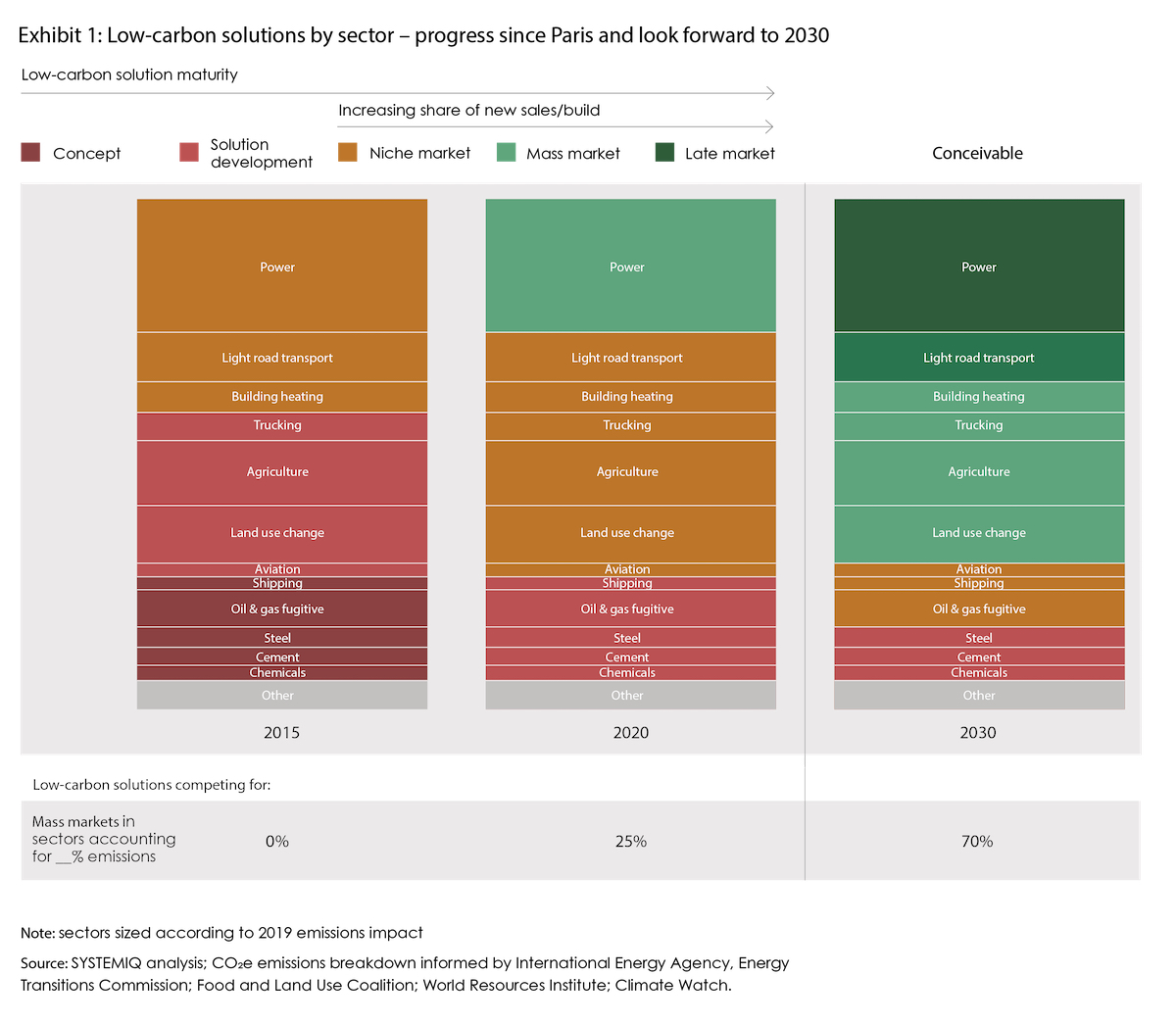 While global greenhouse gas emissions have risen from 53 to 55 billion tonnes per year since the Paris Agreement was adopted in 2015, low-carbon solutions are poised for mass-market appeal in sectors representing 70% of emissions by 2030, creating more than 35 million net new jobs along the way, according to an analysis released last week by SYSTEMIQ.

The report stresses the need for job transition support for people working in declining industries, warning that countries that aren’t quick enough to embrace the wider opportunity will be left behind. “As low-carbon solutions combine with digitization to restructure economies, late movers will not only miss out on the multiple gains from the transformation, but also risk slower growth, lower productivity and job creation, and a loss of competitiveness,” the consultants write. “Countries, companies, and investors now have a once-in-a-generation opportunity to scale zero-carbon industries in the 2020s, creating prosperous growth, millions of jobs, and more resilient economies.”

Despite persistent criticisms of the Paris Agreement for failing to push countries far enough, fast enough toward decarbonization, SYSTEMIQ credits the landmark 2015 deal with setting the stage for a revolution in business and finance.

“The dynamics set in train since the Paris Agreement have created the conditions for dramatic progress in low-carbon solutions and markets over the last five years,” the report states, with net-zero commitments now in place in countries, cities, and regions accounting for more than half of global GDP. “The agreement—with its in-built ‘ratchet’ mechanism—laid out a clear pathway for 195 countries to steadily cut their reliance on fossil fuels. This shared direction of travel increased the confidence of leaders to provide consistent policy signals. In turn, these have created the conditions for companies to invest and innovate, and for the markets for zero-carbon solutions to start scaling—from electric vehicles to alternative proteins to sustainable aviation fuels.”

The net result is that what SYSTEMIQ calls “zero-carbon solutions and markets” are coming onstream far faster than analysts or institutions ever imagined they would, with solar hitting a world average price of just 5¢ per kilowatt-hour this year—a full three decades before the International Energy Agency predicted just six years ago. “Solar and wind are the cheapest form of new generation in countries covering over 70% of global GDP,” the report says, and “this will be the case everywhere by the late 2020s.”

The report charts a similar trajectory for electric vehicles. “In 2016, industry analysts forecast that internal combustion cars would still account for 60% of cars sold in the 2050s,” the authors note. “Today, it is hard to imagine them capturing anything beyond a shrinking minority of sales by the 2030s. Before 2024, electric vehicles (EVs) will beat internal combustion on cost and almost every other purchase criterion: sticker price parity, a fraction of the maintenance, unparalleled acceleration, and near-equal range. Since 2015, when the first few fully electric vehicle models were available, numbers have grown to 230 in 2019, and we are set to see over 500 models on the market by 2022.”

And those examples are just the leading edge of a much bigger transformation, SYSTEMIQ says. The executive summary contains similar projections for heavy industry, plastics, shipping, aviation, trucking, food production, and land management. “The financial markets can read the writing on the wall. The smart money is already moving into clean technologies and solutions. And it is getting out of old economy assets.”

Pretty much across the board, “these trends have created the conditions for sectors to move towards market tipping points where low-carbon solutions can out-compete legacy, high-carbon businesses,” the report states. “Once new solutions find an early market to serve, investment cycles can speed up, enabling performance improvement; costs often fall much faster than expected. The faster they improve, the more investment flows. Once solutions reach market tipping points—beating incumbents on cost, quality, convenience, regulatory alignment, or social acceptance—they can take off on an ‘S-curve’ trajectory. In parallel, legacy businesses often spiral downwards faster than expected as they lose market share, economies of scale, and regulatory support. Once markets smell that a sector or technology has peaked, the dynamics of value destruction can be brutal.”

“The Paris Agreement has inspired net-zero pledges from countries, companies, and citizens,” said former UN climate secretary Christiana Figueres, co-founder of Global Optimism. “This report shows that we can transform very quickly and that recovery from economic crisis must prioritize the delivery of these pledges. The net-zero future is not a far-off vision; we are ready to make the transition now.”

“It is clear the global long-term goal of Paris—net-zero GHG emissions by mid-century—is now the reference point for governments and financial actors,” agreed former French climate envoy Laurence Tubiana, now CEO of the European Climate Foundation. “World leaders started a journey in 2015 and now is the time to accelerate. We know global temperatures and emissions are rising, but this assessment should give us hope that the Paris Agreement is working.”