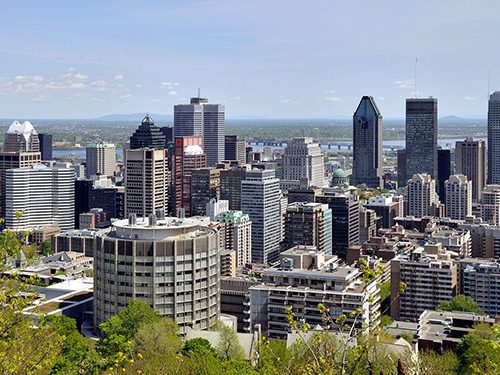 In its just-released 10-year climate plan, the city of Montreal is vowing to cut emissions by 55% from 1990 levels by 2030. Environmental groups like Équiterre are praising the plan as a “very pragmatic and serious” effort grounded in the realities of climate science.

With 30% of the city’s annual emissions attributable to fossil fuel-powered vehicles, greening transportation is central to the plan. It contains commitments to boost transit usage (a feat that will be aided by a new 67-kilometre automated light-rail network set to begin operations in 2022), and to encourage uptake of electric vehicles.

The City also says it will set out to encourage greening and densification, and establish “bylaws and supporting programs to increase the energy efficiency and resilience of all types of buildings.” Also in the works: the implementation of a system of “rating and disclosure” to help large buildings track energy consumption and emissions, and programs to convert “100% of municipal building stock operations to zero carbon.”

Citizens of Montreal “have made it clear to us that they are ready to act for the future of our planet,” said Projet Montréal executive committee member Laurence Lavigne Lalonde. Recalling the 500,000 people who marched through Montreal’s streets in September 2019 as part of the Global Climate Strike, Mayor Valérie Plante noted that the suffering imposed by the pandemic has also “highlighted the importance of having a resilient city on a human scale.” To that end, she said, her city plans to nurture a “green and inclusive” recovery.

And key to that inclusive recovery will be the participation of Montrealers. Heralding its plan as meeting the “collective aspirations” of the citizens, business groups, merchants, and community organizations that were consulted in the plan’s creation, the City stressed that achieving its “ambitious” objectives “will require the mobilization of the entire community.”

Among the groups consulted was the David Suzuki Foundation Quebec, which praised the plan’s alignment both with the latest in climate science and with IPCC recommendations, reports CBC. Quebec-based environmental group Équiterre has also expressed support, lauding the plan as “innovative” and singling out for particular praise its promise to apply a climate test to all of Montreal’s future decisions. Such rigour “sets a standard for all public administrations,” said Director of Government Relations Marc-André Viau.

Équiterre also praised as “significant” the financial underpinnings of the climate plan, observing that the plan is “clearly not only a political priority but also a budgetary one, with 10 to 15% of the 10-year capital expenditure program being devoted to climate change adaptation.”

It also heralded Montreal’s commitment to an annual reporting process, as well as transportation measures like the downtown zero-emissions zone.

But the organization is also waiting to make sure the City makes good on its promises. “Équiterre is concerned about Montreal’s ability to meet its GHG reduction targets,” it states in its release. “Its plan for reductions up until 2030 is unclear and the roadmap to 2050 remains to be defined.”