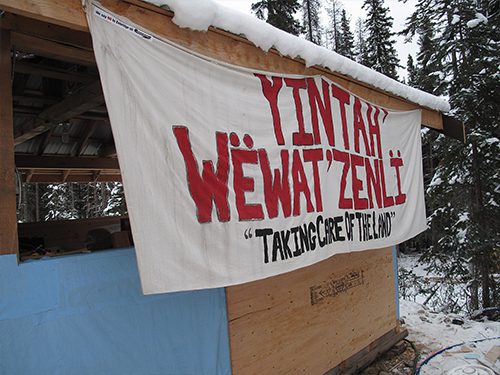 WorkSafe BC documents have revealed shocking carelessness with worker protections in the province’s northern “man camps.” And as COVID-19 cases continue to mount in the region, more than 180 front-line health workers have signed an open letter urging the immediate closure of camps on Indigenous territory.

Written in support of more than 20 Wet’suwet’en matriarchs, or Ts’ako ze’, who are themselves urging closure of the camps, the open letter to Provincial Health Officer Dr. Bonnie Henry is circulating as workers continue to sicken at work camps at the Site C dam, at the LNG Canada project site in Kitimat, and at Coastal Gas Link’s 9A camp on Unist’ot’en territory, reports The Narwhal.

One of the sickened workers from the 9A camp, a member of the Wet’suwet’en Nation, is currently in hospital in an induced coma, the Victoria-based news magazine.

WorkSafe BC documents obtained by The Narwhal show that workers at the LNG Canada camp, currently linked to 54 cases originating with an outbreak that started November 19, complained numerous times about shoddy COVID-19 cleaning practices. A separate WorkSafe BC inspection of the sewage treatment facility at the Site C work camp, where 17 cases have been identified as of last week, found that it “did not have a plan to sufficiently protect workers from pathogens, body fluids, human waste, mould, and COVID-19.”

The signatories warn that community spread is a clear and present danger, especially for Indigenous workers commuting from work camps with a high transmission risk to communities whose public health resources are already stretched. They accuse policy-makers of putting the interests of the economy and industry ahead of Indigenous lives in ways that are self-evidently racist.

“To put Indigenous Elders and youth at further risk in the midst of a pandemic is to say quite clearly that Indigenous lives still do not matter in B.C,” they write. “As health professionals, we have a responsibility to uphold the current and future health of these communities, which are now under threat from the continuing of Coastal GasLink (LNG) work and man camps.”

David Bowering, former chief medical officer for Northern Health, told The Narwhal the province needs to reassess what it considers “essential” in light of the devastating costs to northern and Indigenous communities.

He also noted the dangerous, and deeply unethical, contradiction between pandemic protocols dictated by the province—protocols that Indigenous communities are devoutly following—and the demands of an industry that depends on transient workers flowing back and forth between the work camps and their home communities.

While BC Centre for Disease Control guidance for industrial sites explicitly warns that Indigenous people are at higher risk from COVID-19 than the general population, and that employers should therefore “limit workers’ interactions in surrounding towns,” notes The Narwhal, those limits are not being respected.

“We have been concerned about not just the man camps, but the fact that a lot of the workers are living in our communities and hotels,” said Sley’do Molly Wickham, a spokesperson for the Gidimt’en Checkpoint. “They’re going back and forth every day.”

“The calls to shut down work camps come in the wake of a damning independent review that found widespread racism and discrimination against Indigenous people in B.C. health care,” writes The Narwhal. Released the same day as the Wet’suwet’en matriarchs’ petition, the 224-page report “found that racism and discrimination negatively affect the treatment and health outcomes of Indigenous people, who are already at higher risk of health issues due to a number of factors related to systemic racism, such as poverty and intergenerational trauma.”