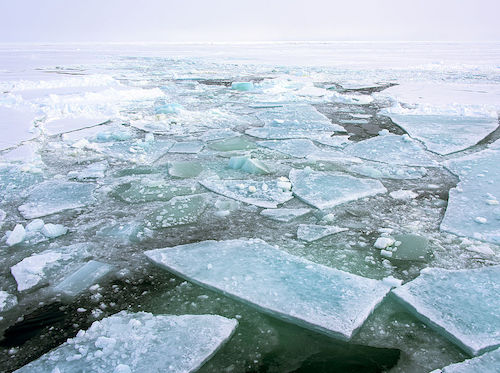 As temperatures soared across Canada’s Northwest Territories last week, scientists from around the world were checking in and confirming an Arctic ecosystem in deepening crisis. They’re pleading for action to protect the ice that remains and, with it, the global ecosystem as we know it.

The thermometer hit 11.1°C in Norman Wells, NWT, last week—5.4° above the community’s previous record high for December set in 1985, reports Eye on the Arctic, a partnership between Radio Canada International and journalists from across the world’s circumpolar nations.

And while temperatures have since dropped to closer-to-normal levels, locals still worry for the future—especially for the caribou, whose ability to forage is being cruelly hampered by the thick ice now left behind after days of unseasonal torrential rain.

It was warm throughout the NWT, adds RCI, with Tuktoyaktuk hitting zero, and Yellowknife reaching above freezing, both at least 18°C warmer than average for this time of year.

Setting these high temperatures in even more alarming context is the just-released 15th annual Arctic Report Card from the U.S. National Oceanic and Atmospheric Administration (NOAA). The report, produced by 150 experts from 30 countries, found that the Arctic climate continued to careen into uncharted territories, writes Arctic Today.

“The Arctic continued a streak of record or near-record climate events over the past year—racking up the second-highest average air temperatures in a century-long history, the second-lowest sea ice minimum, a record heat wave in Siberia, warm sea surface temperatures, and other disruptions,” the international news agency reports.

“The ocean, the atmosphere, the biological, terrestrial activity—all of it is interconnected,” said climate scientist and report card co-editor Rick Thoman. For example, warm winters lead to an early ice melt and less snow on land, leading to a drier summer in Russia’s north. “The Siberian wildfires didn’t occur in isolation,” he said.

The authors added that their deepening sense of the Arctic as a lynchpin for the well-being of human populations across the globe reaches far beyond what was understood when their first Arctic Report Card was issued in 2006.

Case in point, they said, is their shift from being dimly aware that Greenland’s ice sheet is melting to the current certainty that the sheet is “losing mass at nearly quadruple the rate at the start of the 21st century, and that it is the biggest contributor to global sea level rise, adding 0.7 millimeters per year.” Melting glaciers and ice caps are adding an additional 0.4 millimeters annually on top of that.

The NOAA report card also leaves no room for doubt about what is driving these changes, writes Arctic Today. “It is the rest of the world’s carbon emissions that are the root cause of the Arctic accelerated warming and the cascading effects.”

And while the region is not in itself a key driver of climate change, Arctic communities will feel the brunt.

“Because Arctic thaw and melt in the Arctic feeds into a system of positive reinforcement, Arctic warming will continue to outpace the global rate for decades,” said report card co-author and NOAA oceanographer Jim Overland. “While we may be able to hold the globe down to a 2°C increase, the Arctic will be more like 4 or 5°C warming before mid-century.”

He added: “What we do now will greatly impact what happens in the second half of the century.”

Summarizing key points in NOAA’s report, Arctic Today writes that “the average Arctic air temperature from October 2019 to September 2020 was the second-highest in a record going back more than 100 years,” while “sea surface temperatures soared in much of the Arctic Ocean, hitting an August average that was 1 to 3°C above the mean recorded from 1982 to 2010.”

Sea ice extent, meanwhile, is seeing close to record minimums, as well as compositional changes to its seasonal maximum: whereas mature ice (more than four years old) once made up “about a third” of sea ice at its maximum extent, today it is only 4.4% of the total.

Rocketing temperatures are also wreaking havoc on permafrost, especially along Arctic coastlines. “In the first two decades of the 21st century, sites along the Alaska and Canadian Beaufort had erosion rates 80 to 160% higher than those recorded in the last two decades of the 20th century,” Arctic Today reports.

One bright spot: warming waters are luring more zooplankton into the Bering Strait, which will likely prove at least a short-term boon for bowhead whale populations. But deteriorating conditions for a safe hunt mean Indigenous residents will be less likely to benefit.

The report celebrated evidence of growing international concern about the Arctic, pointing in particular to the accomplishments of the year-long data-collecting efforts of the Multidisciplinary Drifting Observatory for the Study of Arctic Climate (MOSAiC) Expedition. But Thoman noted that this one-off expedition—however “cool”—is no replacement for the humdrum collection of routine data, a process that has been dangerously disabled by budget cuts to the U.S. National Weather Service. Rural Alaska weather stations once staffed by humans are now automated, for example, meaning that critical data that only human observers can collect (like whether precipitation is falling as rain or snow) is being lost.

In another illustration of how Arctic regions are linked with the rest of the planet—including their literal polar opposites—a study published last month in Nature has paired computer simulations with 40,000 years of geological evidence taken from ice cores and the seabed to confirm that “the planet’s two hemispheres are in a kind of conversation,” reports Climate News Network.

“Ice sheets can influence each other over great distances due to the water that flows between them. It’s as though they were talking to one another about sea level changes,” said lead author Natalya Gomez, an associate professor in Earth and Planetary Science at McGill University.

This capacity to “chat” owes to the fact that “polar ice sheets are not just large static mounds of ice,” Gomez told Climate News Net. Rather, “they evolve on various different time scales and are in constant flux, with ice growing and retreating, depending on the climate and the surrounding water levels.”

And so it was, the UK-based publication explains, that “at the height of the last ice age more than 20,000 years ago, the mass of ice in the north lowered global sea levels and the Antarctic ice shelf advanced.” Once the world warmed and Arctic ice began to melt, sea levels rose in the southern hemisphere, in turn forcing an ice retreat in the south.

Meanwhile, scientists working on near-future Artic modelling are issuing a plea to protect what remains, reports the Nunatsiaq News. In a commentary published last month in the journal Science, Canada research chair in aquatic ecosystem studies Warwick Vincent and Carleton University geography professor Derek Mueller urge that the so-called “Last Ice Area”—that is, the richly biodiverse remnant of Arctic ice shelf still expected to be frozen year-round in 2040—come under permanent protection. Currently the area, which cups the northeastern tip and side of Ellesmere Island, is safe from human activities only until 2024.

“This region is significant because it contains the oldest and thickest sea ice in the Arctic Ocean,” Nunatsiaq News explains. As an expanded protected region, the Last Ice Area—called Tuvaijuittuq, “the place where the ice never melts”—will be the final refuge for species that depend on the ice for survival. That category includes creatures found nowhere else on Earth, such as bottom-dwelling creatures like scallops and sea anemones found at the head of the parent fiord for the Milne Ice Shelf, which collapsed catastrophically and unexpectedly this past August.

“The ice shelf acted as a sort of natural dam by trapping meltwater at the head of the fiord, creating a rare epishelf lake,” writes Nunatsiaq. The rare creatures were found in a meltwater channel that ran to the sea from this “lake.”

In addition to permanent protected status, Vincent and Mueller are urging that the area be expanded inland to include ice-based ecosystems that also depend on land, as well as to regions “geographically east and west across the entire thick ice zone, which includes Greenland.”

With so many feedback loops in evidence, Arctic research reports like the ones released last month are becoming more relevant to human society than ever, writes Reuters in its coverage of the 2020 Arctic Report Card.

Such studies are “more than an intellectual exercise in understanding nature,” said report co-author and sea ice geophysicist Donald Perovich. “These changes are having consequences for people living today.”