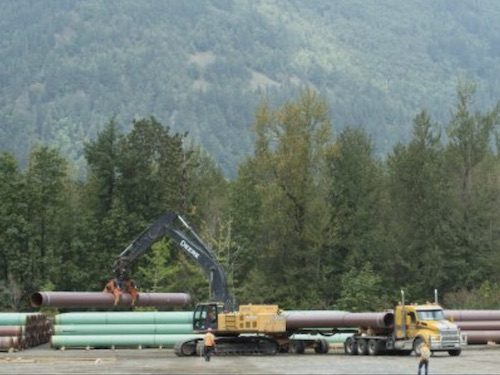 The Trans Mountain pipeline is still a profitable venture for the federal government, but could end up losing money as a result of tougher climate change policies, declining oil demand, construction delays, and rising costs, Parliamentary Budget Officer Yves Giroux concludes in a report released yesterday.

The analysis comes just a couple of weeks after a scenario developed by the Canada Energy Regulator showed there will be no need and no justification to complete the Trans Mountain pipeline expansion or the Keystone XL pipeline if Canada makes any effort at all to strengthen its climate policies.

This week, Giroux said Trans Mountain “remains profitable based on expected cash flows, estimating the government could make C$600 million above its purchase price,” The Canadian Press reports. But “everything could change based on circumstances both beyond and within the government’s control, including changes to climate policy that would reduce demand for the petroleum products the pipeline moves.”

The PBO’s report includes a scenario based on the Trudeau government’s pledge to bring the country’s greenhouse gas emissions to net-zero by mid-century, CP adds. That would translate into a $1.5-billion loss for Trans Mountain, even if the pipeline continued operating through 2050.

And while the Crown corporation now running the Trans Mountain project says it has 15- to 20-year contracts for 80% of the pipeline’s capacity, “after these initial 20 years it’s a big unknown as to how much of the pipeline will be used,” Giroux said. “Over the long-term horizon, we don’t know exactly what proportion of the pipeline will indeed be needed.”

The report points to a number of other “risks and uncertainties” in the pipeline’s future, CBC adds. “For example, the report suggests that if the pipeline’s completion were to be delayed by just one year, the government could lose about $400 million of its purchase value. The pipeline also could lose millions or even billions of dollars more if other factors such as delays, soaring budgets, and contract commitments change over time.”

One of those cost discrepancies showed up over the weekend, when Trans Mountain reported that its COVID-19 control measures had hit a price tag of $12.5 million, 10 times the $1.2 million the company reported just last month, CBC writes. “I found since the beginning, since [Prime Minister] Justin Trudeau bought the pipeline, there has been a complete lack of transparency,” said MP Peter Julian (NDP, New Westminster-Burnaby). “And so with COVID-19, I am not surprised by the discrepancy between the initial figures and new figures coming to light.”

Climate hawks pounced on the latest evidence against the controversial, $12.6-billion pipeline, with 350 Canada circulating a sign-on calling on Trudeau to choose between pipelines and the planet. “It’s past time that Trudeau was honest,” the campaign organization states. “Does he want to build a pipeline or tackle the climate crisis? He simply can’t do both.”

“Unless the federal government can show how it plans to reconcile its climate goals with Trans Mountain, and prove that this project is in Canada’s best economic interests, we need a moratorium on any new federal spending on this boondoggle of a project,” Dogwood campaigns manager Alexandra Woodsworth told CBC.

“This pipeline is only profitable in a worst-case climate scenario, where the world takes no new action on climate change,” agreed Greenpeace Canada Senior Energy Strategist Keith Stewart, in an interview with CP. “That is not a future that we should be betting over $12 billion of public money on.”

Pragmatic Canadians concerned about climate change and also recognizing the importance of a strong economy have wanted to understand for years, how global climate commitments can be squared with the increased pipeline capacity our federal government and industry have been fighting for. We’ve never been given that. This piece seems to suggest what I’ve long suspected – TMX can only be a financial success if our climate change plan is fictional.

We owe this to the country and the world. Support clean Canada!