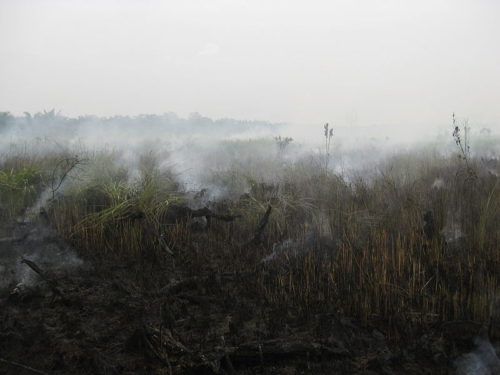 As the world warms, the planet’s carbon-dense peatlands are catching fire, creating fierce conflagrations with a “zombie-like” tendency to re-emerge. But a recent study published in the Proceedings of the Combustion Institute concludes that an elegant extrapolations of math can help land stewards prevent the fires before they start.

“Some clever new modeling, known as cellular automata, is giving fire scientists unprecedented insight into the life, spread, death, and rebirth of zombie fires,” reports Wired. Developed by three mechanical engineers from Imperial College London and a forensic architect from the University of London, the modelling could provide a tool for preventing the monster underground conflagrations that are increasingly erupting in the world’s peatlands.

“The magic of cellular automata is that by aggregating very simple rules in a space, it actually is able to capture what is called an ‘emergent behaviour,’ which is a behaviour that is extremely complex,” said study co-author Guillermo Rein. In the case of peat fires, these “rules” are factors like relative humidity, time, and proximity to a patch already burning.

This cellular automata aggregation and prediction model also permits those who deploy it to receive results in “super real-time”. That means, more or less, that “you get results of the future location of the fire before the fire is already there,” said Rein.

And there is plenty of power and room to add “still more variables like wind and topography, even roads and rivers that act as firebreaks,” Wired writes. As Rein notes in the study: “You can literally complicate as much as you want, and it will still be really, really quick to run.”

But as the adage goes, “all models are wrong, but some are useful,” Wired cautions. Rein and his colleagues were wary of assuming their model could produce a “perfect simulation” of a real-world peat fire, so they added the rigour of comparing their simulations “to what they and other scientists have already observed with controlled burns set experimentally in actual peatlands,” along with drone footage from Indonesia’s 2015 peat fires.

“Sure enough, their model jibed with the real-world observations of how peat fires spread, and how at times individual fires in a landscape merge into several bigger fires,” writes Wired.

“Researchers have long known that as peatlands dry, they switch from a fire break to a fire propagator,” said McMaster University ecohydrologist Mike Waddington, who was not involved with the study. He added that the cellular automata model will help fire scientists learn more about the role that moisture levels play in that switch, and better understand the complex process by which burning peatlands oscillate between smouldering and flaming states.

Such understanding is growing ever more urgent in the face of the climate crisis. “When peatlands burn, they can release thousands of years’ worth of accumulated carbon into the atmosphere in great burps, further warming the planet—we’re talking up to 100 times the amount of carbon that’s released from the average above-ground wildfire,” Wired writes.

And where wildfires can sometimes serve to “reset” an ecosystem, peat fires merely destroy. “Peat fires are monsters,” Wired writes, citing Rein. “They are devastating. Nature has no role whatsoever for the peat to burn.”

On top of that, while burned forest will begin to re-sequester carbon as soon as it starts to grow back, such regrowth occurs very slowly in peatlands—on a scale of millennia, in fact.

A study just published in Nature Climate Change affirms the urgent need to address this serious problem, reports Radio Canada International. The international team of climate modellers behind the study “combined estimates from 44 peatland experts and suggested that peatland loss could contribute about 104 billion tonnes of carbon this century.” The team is urging climate modellers to begin including peatlands in their calculations—a factor that has been generally overlooked to date because the ecosystems “have been considered ‘inert’, neither absorbing nor releasing carbon if left alone.”

While acknowledging that the estimate is highly uncertain because of the scarcity of data, co-author Angela Gallego-Sala said that there is enough evidence to know that the world needs to act now, and with urgency, to restore degraded peatlands and protect what remains.

“We clearly need to make decisions now about how we manage these ecosystems. We simply can’t afford for peatlands to go up in smoke,” she said. “Where people have a strong economic incentive, or even necessity, to destroy peatlands, we need plans and policies that offer more sustainable alternatives.”